A Pittsburgh Community Member Reflects On The Parkland Suicides 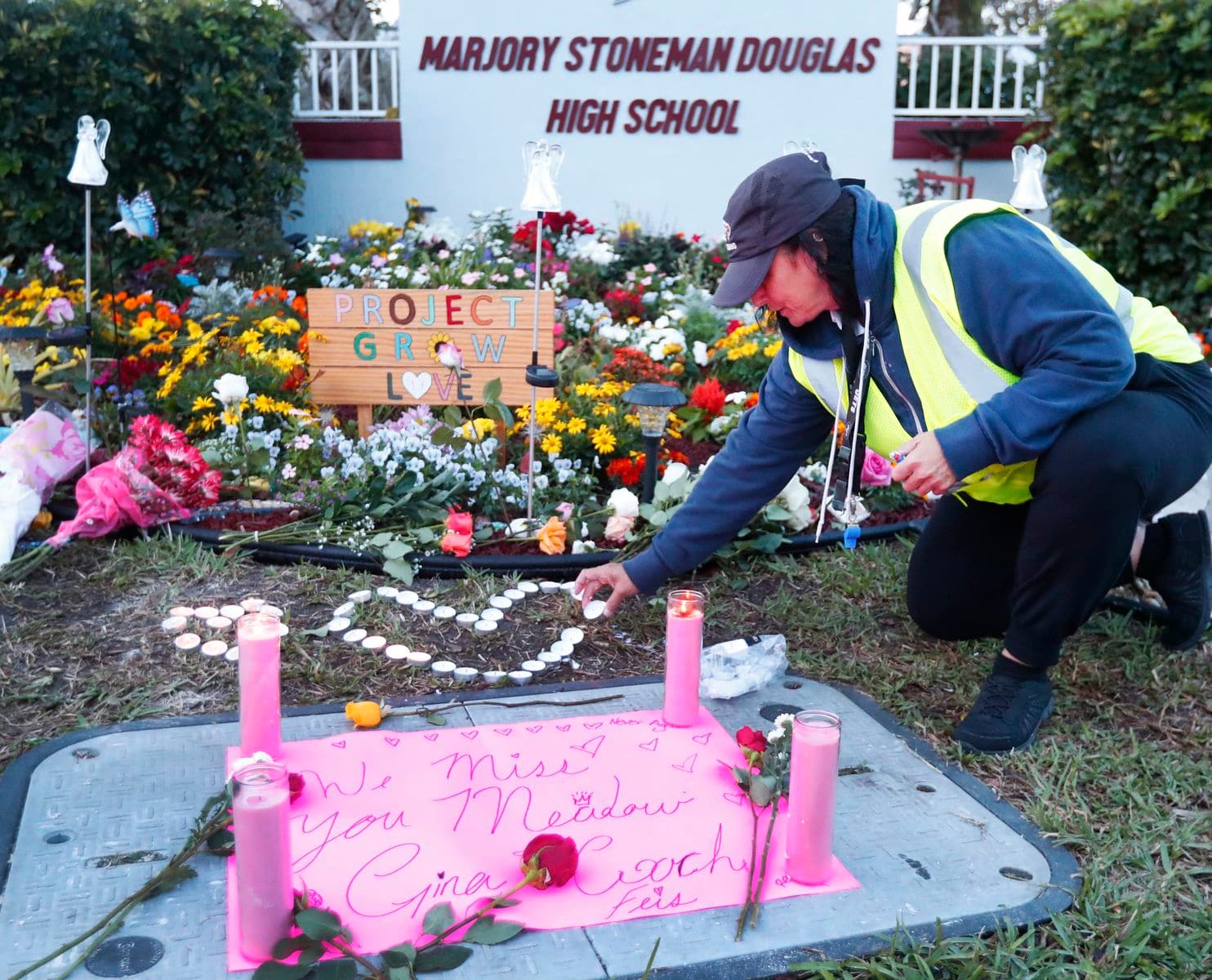 We have so many things calibrated precisely in modern life: how long it should take to send an email, make a cup of coffee, defrost a pre-made meal in a microwave, how many steps we should ideally take every day to stay fit.  Even things that were guessed about in pre-modern times, like the gestational age of a fetus in utero, can now be tracked with precision. The problem is that there are vast realms of existence that are completely unsuited to such clear-cut measurements.  For instance, when we assume that there is a timetable for the process of grieving after a trauma and that in “X” amount of time all will be back to normal, unchanged.

That scenario is completely unrealistic.  None of us knows when we will feel upset by a particular trigger or a reminder of a person who is gone or of the shooting itself.  And we don’t necessarily know what kind of counseling or treatment will be most effective. Research may show that certain types of counseling lessen post- traumatic stress, such as trauma-focused cognitive behavioral therapy, but that doesn’t mean every type of therapy will help everyone equally.

As a member of the Jewish community in Pittsburgh, grieving the loss of eleven of our fellow Jews and coping with the ripple effects of the trauma of people from all facets of the community, I am frightened that the suicides of two students from Parkland and one father of a six year old killed in Newtown, could be repeated here.  I was not aware of how common it is until I read what Ashley Fetters wrote recently in the Atlantic, “The death by suicide of someone connected to a school shooting is, unfortunately, a familiar story line.”  She backs this contention up with tragic statistics that “28 percent of people who survive mass shootings in the United States develop post-traumatic stress disorder,” and that PTSD is a risk factor for suicide.

What I learned, hearing what some  students at Parkland have to say, is that one model of therapy and healing is not enough. To help those who are grieving a mass trauma, there need to be multiple points of entry and possibilities. No one should ever be told to “put your grief in a box” as Kyra Parrow a Margery Stoneman Douglas graduate says she was told by one of her teachers.  This kind of compartmentalization, while sounding and seeming convenient, is just not compatible with the way human beings experience and process their emotions.  As the Jewish Family and Children’s Services of Pittsburgh wrote in a newsletter to the community, “We have learned yet another lesson: that the damage of trauma runs deep, and it doesn’t have an expiration date.”

We in Pittsburgh are terrified that similar things could happen here.  Rabbi Sharyn Henry of Rodef Shalom speculated to me about who might have particular risk factors and who might need extra attention. Squirrel Hill’s Jewish Family and Children’s Services newsletter quoted their grief therapist, Angelica Miskanin.  “Everyone’s level of grief is justified,” says Angelica. “Your feelings, whatever they are, are legitimate and important. Some people may try to minimize how this tragedy has affected them, but I can’t stress enough how deserving every person is to have their feelings heard in a safe and caring environment.”

Jewish tradition provides guidance that can be useful to all about how to express our feelings around grieving.  When Jews go to a house of shiva, we are told to take our cues from the mourners; “comforters are not permitted to say a word until the mourners open conversation” says Rabbi Yochanan in the Babylonian Talmud Moed Katan 28b.

In the book of Job, where Jews derive many of our laws about mourning, we are told that Job’s friends “sat with him on the ground for seven days and seven nights”(Job 2:13) without speaking. For the seven days of most intense grieving, all direction about how to behave, all cues must be taken from the mourners themselves.  At a time where loss creates a feeling of powerlessness and vulnerability, those around them try to give them back a small measure of control by being attentive to the cues and needs of the mourners themselves.

I wonder if whether in the modern world, in our rush to be efficient and do things in what may seem to be the most effective ways, we are missing some of the ancient wisdom of silence and allowing those grieving, to have the scope to grieve in whatever way they need to, without time limits or expectations.  I wonder whether the erroneous belief that grief is something that one will experience during a contained amount of time that will then magically cease, is harming some people connected to events of mass trauma.

Fetters quotes a study from Dawson College in Montreal about a counselor for victims who says, “So if you are still struggling–maybe you don’t have those informal supports, and maybe you also don’t have the formal resources anymore–and there’s this expectation that you should be moving on, or that we should not be talking about this anymore. That can fuel more distress.”

The closest analogy I can think of to my feelings now grieving those lost on October 27, (three of them members of the congregation where my husband is a rabbi) and our general sense of shock and vulnerability around the event, is when I had a miscarriage. It isn’t truly comparable, but it was a loss, a potential life that did not come to fruition. I grieved a long time, even though part of me did question how legitimate my intense feelings were when, after all, I had never known this child, only that he or she had existed and then his or her heartbeat ceased.

What helped me most was hearing from a woman in her eighties, with living children in their late fifties and early sixties, and grandchildren and great-grandchildren. She came up to me at synagogue to tell me about her own miscarriage. She started to cry, talking about it. I realized that her experience had been at least fifty years in the past, probably more, and yet the pain and grief was real and lasting. It gave me permission to accept the depth of my grief and live with it. I knew that what I was feeling was not “excessive” or overdone, that I wasn’t exaggerating something not important. If she still owned and felt her grief, then it should be okay for me to feel it also.

“You never really get over it,” Chavie Levine Knapp told us about being in a bus that was blown up in Israel on April 9, 1995, killing her friend Alisa Flatow.  It was comforting to know, that in December 2018 when we met her, over 23 years since that day, she still felt it shaped her life and experiences.  Knapp had invited her friend, whose other plans fell through, to come along with her and another girl to a spa in Gaza before Passover. According to the New Jersey Jewish Standard, Flatow and another friend were sitting behind the driver and Knapp on the seat was behind them.  Shrapnel penetrated Flatow’s head and she never woke from a coma, while Knapp was scratched.

I was glad to hear her say it –  no one needs the false comfort of relentlessly cheerful narratives to find meaning and power in roles chosen for them as being in the wrong place at the wrong time, and yet surviving.

I am particularly aware of Chavie’s words as I grieve over the suicides of two teens from Parkland and the father of one of the Newtown victims.

Did they not give themselves permission not to get over it, but to continue to live in the aftermath of grief?

Did they think after a year – or six years – their sorrow and grief would lift and gave up when they did not?

Did they think they had to find meaning in the tragedy or show how inspiring they could be to others while still feeling so so hollow inside?

I do want any victims of trauma, from whatever layer of connection they have to the event, to have permission to process and sense all their feelings, whatever they are.  Humans are bestowed with a range of feelings that have to be acknowledged and permitted, not legislated as “you should feel this or do that” if you are grieving.

I don’t know how exactly to know who is at risk or how to prevent more suicides from those connected with these events, but I do know that, in the words of the JFCS newsletter, “Whether one contemplates suicide or not, we all benefit from knowing that somebody cares.”