A Catholic’s Commentary In A Time Of Scandal 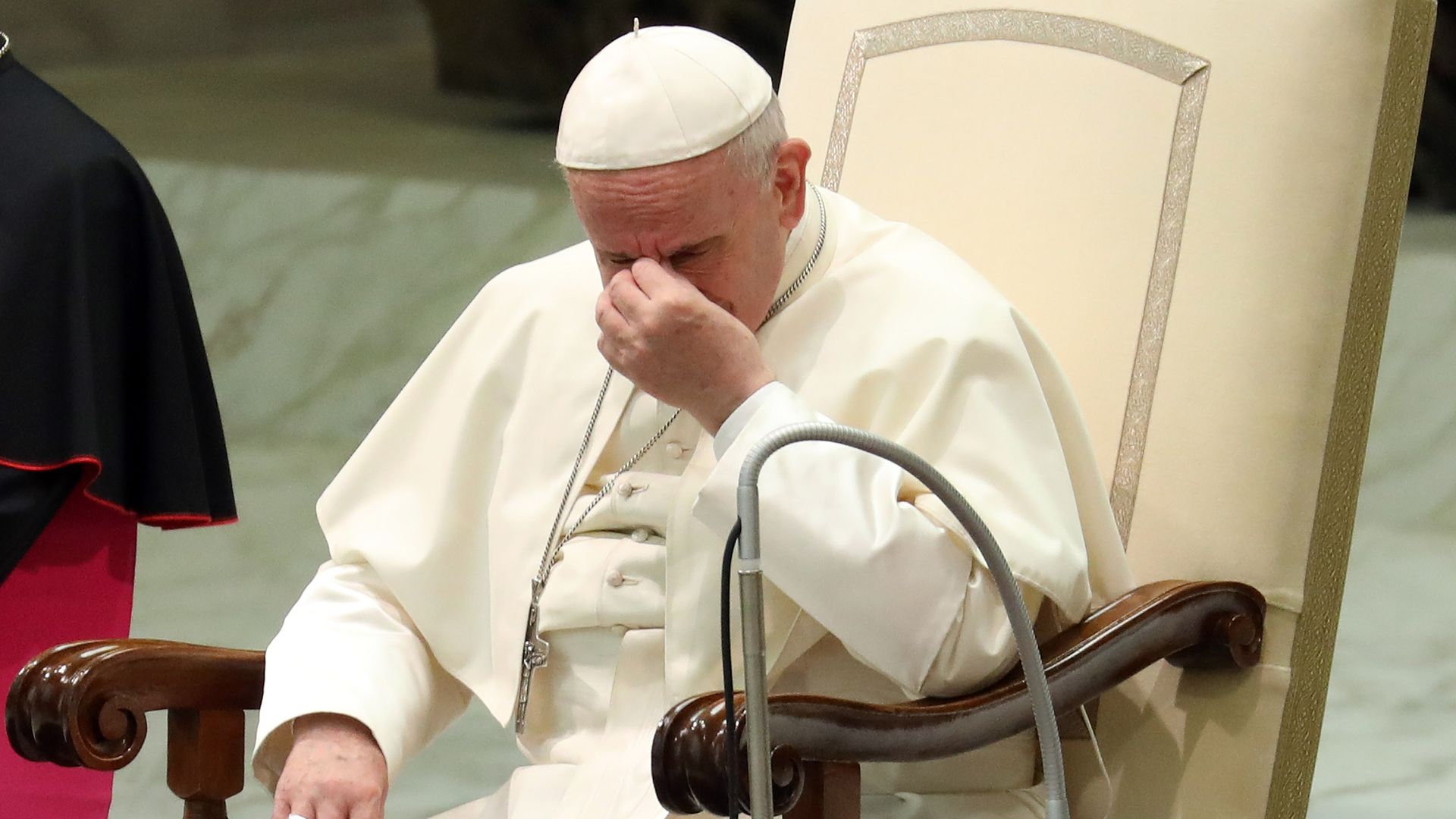 In the current atmosphere of scandal and insecurity, Catholics find themselves questioning the integrity of their own identity. We find ourselves equated with the members of the clergy who have been found guilty of the most shocking abuses against the most vulnerable, and are asked how we could possibly remain in a Church rife with such egregious hypocrisy. For those who have long attacked the Church, it is an excuse to cut her to ribbons and decry her for organizational putridness. It is also an excuse to generalize, to shame, and to engage in a day-in, day-out spiritual war of wills on social media outlets against those Catholics already struggling with dark nights of the soul in the wake of the crisis.

This is compounded by allegations against many members of the hierarchy who, in the worst-case scenarios, serially relocated offending clergymen, or in even the best case scenarios, were guilty of failing to carry out investigations with the vigor necessary to stamp out the evil. Even those with the best of intentions and with a record for doing great good for the Church and the world are implicated in turning a blind eye, at least to some degree, or allowing themselves to be swayed by misplaced sympathy or an almost willful ignorance. Victims of the crimes in the meantime, were left unheard and in some cases villainized by those in their parishes and dioceses, more concerned about keeping up appearances than in redressing the wrongs.

They are shocked to find that true evil has dwelt in the depths of what we considered our safety zones, that the devil had reared his head in the house of God, that wolves had been found preying upon the sheep. They are more horrified over the shepherds, either convicted of gross negligence or else simply blundering decisions that “seemed like a good idea at the time”, but merely cast shadows on the work of reform that has been eagerly pursued since 2002. All of previous three popes, John Paul II, Benedict XVI, and Francis, while undeniably striving towards the betterment and purification of the Church, each failed on given levels to address the crisis with the intensity and thoroughness which it warranted.

For some, this is reason enough to crumble up all three of them, and anyone else with similar flaw-marks scarring their record in this area, and throw them in the trash as irredeemably tarnished. It is enough to want to expunge and destroy anyone anywhere involved in genuine moral failings and political blunders in the way the crisis has been universally handled, especially in the hot-spot countries such as the USA, Ireland, and Australia. Some, indeed, insist that not only should Pope Francis be made to resign, but that Pope John Paul II’s sainthood should be revoked, and that the entire hierarchy is so beyond redemption that it should be yanked to its foundations and started over from scratch.

While I understand the emotional appeal of this “wrecking ball” plan, it is being used both by those outside the Church who have always viewed it as in need of a good wrecking, and those inside who have long resented the reforming and progressive outlook of Pope Francis, with regards to the global work of reaching out to the ostracized, abandoned, and neglected, to expand our horizons in order to grapple with the complexity of modern life, and to embrace the messy beauty of faith found on the fringes. This is not unlike the hallmarks of John Paul II’s own papal legacy, something which all of us in the Church have learned and grown and benefited from on countless levels. We have changed in so many ways, and there is no turning back from that. Hijacking the crisis as a means of blotting out legacies of evolution is not the way to go.

Do I have a magical plan to get a grip on this scandal, to automatically stop the bleeding, and clean out all the wounds? I hate to admit it, but there is no easy solution to be had, certainly not an instantaneous one, and not one which applies to logic or justice by broad-sweeping everything under the rug. On a practical level, a total auto-purge would instantly destabilize, and most likely destroy the functional capacity of the Church. But even on a moral level, one cannot condemn blindly, with no sense of context or degree.

The fact is that humanity is multi-faceted, and human legacies are not often black-and-white. Even though it is difficult, the time has come to try and make sense of the substantial gray areas on a case-by-case basis, punishing and pardoning as the individual situation warrants.

One thing the Church itself has never claimed is that saints, much less popes (even the genuinely holy and well-intentioned ones), are spotless. For example, St. Bernard of Clairvaux, the great doctor of the Church, infamously wrote a treatise “In Praise of the New Knighthood”, a document that urged crusaders to fight against the “pagans” of the east with the same freedom as if they were “evil-killers” as opposed to “man-killers”. He also urged that men infamous for rape and murder in their own countries be allowed to fight overseas on their behalf, outwardly admitting that he wanted them gone from the area since they were such local menaces. The effect that this type of “dispensation” had on the atrocities committed by Christians during the wars is disturbing to contemplate.

Similar arguments have been launched in recent years against the likes of St. Theresa of Calcutta, St. Thomas More, and St. Junipero Serra, among others, good people with good intentions who still committed acts of questionable moral judgement, to say the least. The question is, should we demand a revocation of their sainthood as well? If this kind of purity test were administered, our calendar of saints would most likely be obliterated in short order. A similar sense of balance is needed in judging the living as well as the dead, taking into consideration the whole and judging the acts (or lack thereof) in question accordingly. Instead, we have a history of veering to the extreme of either doing nothing to administer justice or overcompensating by judging all those implicated in the same way.

What I would like to see happen most of all is for a system of enhanced accountability to be institutionalized within the Church, run by lay people, both men and women alike, dedicated to watching the clergy like hawks and expunging any and all sex offenders still in circulation, assuring that they are appropriately defrocked and, if the statute of limitation should be suspended in these cases, turned over to the proper state authorities for punishment under the law.

I would go further to say that non-Catholics sympathetic to the plight of the Catholic faithful and our desire to take positive action towards removing this cancer, should also be recruited to also hold accountability for the Catholics involved in the investigations. Those sent to investigate the individual parishes should also have no direct ties with them, so that it will have a higher chance of being unbiased in its findings and judgements.

As for those involved in cover-ups and lack of needed action, again, I would advise taking it case-by-case based upon the extent of damage done and the context in which it was done. In some instances of serial and severe negligence, the punishment should be equally severe; in other more minor cases of poor judgement or slowness to properly investigate a handful of isolated instances, a slap on the wrist and careful observation may suffice.

In all cases, the sense of “being watched” should permeate all continued actions of the clergy, who should make the care of their spiritual flocks their main priority at all times, while being much more open to sharing administrative power with the lay people of the Church (especially an enhanced presence of women in the decision making processes, both lay and consecrated religious, which has long been overdue).

Most importantly of all, we must reach out to the victims of these atrocities against, not only every aspect of Catholic moral teaching, but the barest shred of human decency itself. They have been closeted for far too long, and even though the past two popes have striven to reach out to them in many ways, much more needs to be done. This does not just mean actions on the part of the clergy, but also the laity.

It is our time to assume heightened responsibility in embracing our brothers and sisters, whether inside or outside the Church at this time, and offering ourselves to them in solidarity, in whatever ways we can. They are too often the forgotten voices that should be heard, and they are the ones who deserve, more than anyone else, to watch the head of the beast that attacked them be crushed forever. We must commit ourselves to achieving this with an equal measure of rationality and resolution, so that while such trauma may forever haunt our Church, it will never again be repeated on such a horrific scale.

In all these things, I feel that Catholic identity is the thing that must be the purifying and healing force, within us still beating strong.  We must not turn aside, must not run away, must not let anything drive us away from what is ours, our Trinitiarian, Incarnational, Sacramental life-blood.

If you still hold true in your heart the fundamental beliefs of the Catholic Faith, no matter your disgust and frustration with the organizational corruption, you are still Catholic, and we need you now more than ever. The fact is you are the Church. I am the Church. All of us make up the very breath she breathes, and we must assure that it’s clean air as best we are able.

This is our heritage, our history, the inner groundwork of our spiritual being. We are bound by this, committed to this, and actualized in this. Nothing and no one should be capable of scaring us away from our own spiritual source. It runs deeper than any scandal that might assault it, for it is not external, but rather internal. It is what Pope John Paul II wrote of in a mystical poem which I cannot help but find profoundly apt under the circumstances:  “I want to describe the Church, my Church, born in me, not dying with me, nor do I die with it, which always grows beyond  me. The Church, the lowest depth of my existence and its peak. The Church, the root which I thrust into the past, and the future alike, the sacrament of my being in God, who is the Father.”

And so I am Catholic. And so I intend to remain as long as I may live.