Women Used To Dominate Tech… Until They Were Pushed Out 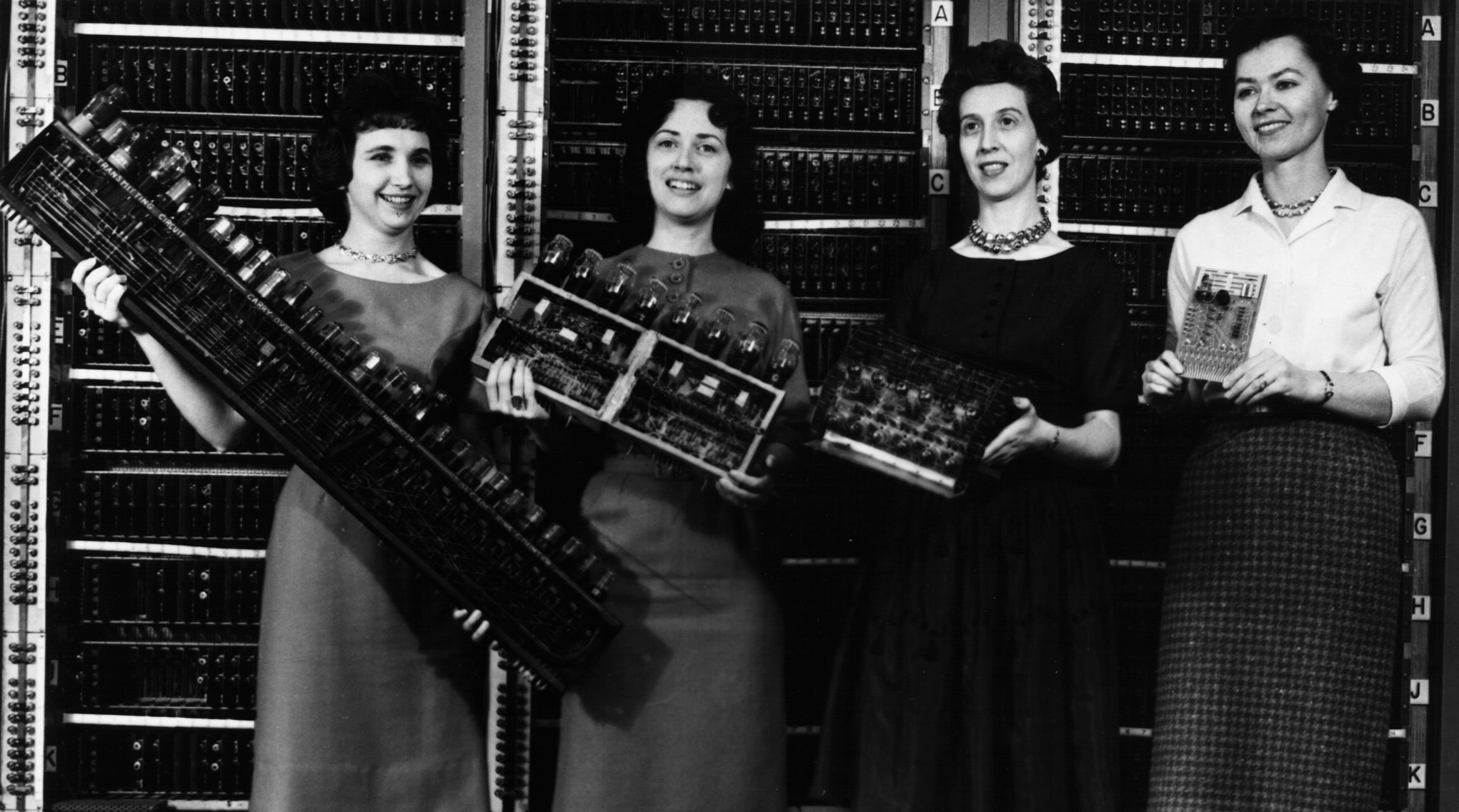 The recent leak of an anonymous Google software engineer’s 10-page screed against the company’s workplace diversity initiatives has shone a less-than-flattering light on the dark underbelly of tech culture.

But it also ignores a large and crucial part of history. Namely, that the first software engineers and trailblazers in the field of computer programming, were women.

Today, it’s men who dominate computer fields, and by a large margin. Google’s diversity report reveals that the company employs 31 percent women, 20 percent of whom work in technical fields. Those numbers are consistent with the tech industry as a whole, where only one in four computer programming jobs are held by women.

It wasn’t always that way, though. In the dawn of the digital age of computing, women contributed in a big way to the development of the first computers and to computing theory as we know it.

But their involvement started to fade abruptly in the mid-1980s, and the critical role they played throughout the better part of the 20th century in shaping the nascent computer science field is widely unknown today.

It’s why Bill Gates, Steve Jobs, and Mark Zuckerberg are household names, but Jean Jennings Bartik and Grace Hopper are not.

So how did computer science transform from a field largely dominated by women into one synonymous with hoodie-wearing, industry-disrupting, brilliant-yet-socially-awkward tech-geeks raking in bounteous salaries in Silicon Valley? The story behind women’s rise and fall as programmers sheds light on why they may have more to offer in the field of computer science than our present tech culture would have us think.

Jean Jennings Bartik studied mathematics in the 1930s, and like many of her female peers, she was a computer–that is, “one who computes.”

In 1942, the U.S. military program hired Bartik, along with hundreds of other women, to do complex calculations on trajectories of military rockets and artillery shells to improve their accuracy.

A group of women computers during WWII

Then, in 1945, Bartik got the opportunity to work with ENIAC, now credited as being the world’s first general purpose computer. ENIAC could do calculations much faster than humans. But someone had to create the programs for it.

At the time, men generally specialized in hardware engineering–building circuits and machinery–while women mostly developed software. The former was viewed as manly, while the latter was thought of as plugging-and-chugging requiring little intellectual skill, and was widely perceived as women’s work.

So Bartik, along with her female colleagues, programmed for ENIAC, and in the process, she and her team developed and codified many fundamentals of computer programming.

After WWII, Bartik and her “ENIAC girls” began working with the UNIVAC, one of the first commercial computers. And in 1949, the ENIAC programming team hired a woman named Grace Hopper to join them as a senior mathematician.

Grace Hopper was a Rear Admiral in the Navy during WWII, with a Ph.D. in mathematics from Yale. To this day, she is one of the most significant contributors to computer science.

While working on the UNIVAC, Admiral Hopper recommended that a new programming language be developed using English words, to make programming easier and more intuitive. Her “compiler” was born in 1952, a program that converted English instructions into machine code understood by computers, paving the way for modern programming language.

As Admiral Hopper explains it:

It’s much easier for most people to write an English statement than it is to use symbols. So I decided data processors ought to be able to write their programs in English, and the computers would translate them into machine code. That was the beginning of COBOL, a computer language for data processors. I could say “Subtract income tax from pay” instead of trying to write that in octal code or using all kinds of symbols.

When she first developed the compiler, she says, “Nobody believed that. I had a running compiler and nobody would touch it. They told me computers could only do arithmetic.” (Regarding the initial pushback she faced, she quipped, “Humans are allergic to change. They love to say, ‘We’ve always done it this way.’ I try to fight that. That’s why I have a clock on my wall that runs counter-clockwise.”)

Fast forward to today: COBOL is the major language used in data processing, and in virtually all business transactions. If you’ve swiped a credit card recently, you’ve benefited from COBOL.

At the time, women like Grace Hopper were not so rare. In the 1950’s, 30 to 50 percent of computer programmers were women. In 1958, before women were allowed to have their own bank accounts, female programmer Elsie Shutt became one of the first woman in the U.S. to start her own software company, comprised of only female programmers, allowing women to earn money and maintain their technical careers as part-time programmers while raising a family.

Elsie Shutt, who founded one of the first software businesses in the U.S. in 1958. The programmers were all women.

The trend continued rising into the 60s. A famous 1967 article in Cosmopolitan magazine titled “The Computer Girls,” hailed computer science as the natural career choice for savvy young women looking for an alternative to a secretarial job:

Twenty years ago a girl could be a secretary, a school teacher . . . maybe even a librarian, a social worker, or a nurse. If she was really ambitious, she could go into the professions and compete with men, usually working harder and longer to earn less pay for the same jobs.

Now have come the big, dazzling computers, and a whole new kind of work for women: programming. . . . And if it doesn’t sound like women’s work, well, it just is.

In the same article, Admiral Hopper told the magazine, “Women are ‘naturals’ at computer programming,” because, as she put it, “It’s just like planning a dinner . . . Programming requires patience and the ability to handle detail. You have to plan ahead and schedule everything so that it’s ready when you need it.”

Though programming required advanced mathematical skills and an adeptness at problem-solving, it was still far less lucrative than building hardware, which was perceived as more intellectually strenuous–and therefore masculine.

As revolutionary advancements in computer software brought a gold rush to Silicon Valley, and men like Steve Jobs and Bill Gates rose to hero status, more men started becoming trained as computer programmers. And employers started to realize a truth we now take for granted: Programing is hard.

Respect for the computer program rose. And so did the pay. Men started becoming more interested in the field, and the money that came with it. In an effort to boost the field’s prestige, they began creating professional associations, pushing educational requirements for programming careers, and discouraging the hiring of women.

A 1960’s ad suggesting that women computer operators should be replaced by upgraded technology.

Ad campaigns began criticizing women for being error-prone, time-wasters and gossipers. (“What has sixteen legs, eight waggly tongues and costs you at least $40,000 a year?” one asks.)

Aptitude tests and personality profiles, commonly used to screen and rank job candidates in programming in the 1950s and 60s, also played a significant role in masculinizing the field. Aptitude tests, for example, tested skills that boys were more likely than girls to have learned in school, since girls were discouraged from STEM subjects at the time. Companies used personality profiles to screen for applicants with anti-social tendencies, a stereotypically male trait, after two prominent psychologists observed that programmers shared the “striking characteristic” of “their disinterest in people.”

Still, during the 70’s and early 80’s, thanks to booming demand, the number of women pursuing studies in computer science continued to increase. By 1984 it had reached 37 percent–twice what it is today.

And then, after 1984, it suddenly flattened. Then, it began to plunge. And it never recovered, even as the distribution of women in other technical and professional fields–like medicine, law, and engineering–have continued to rise.

The age of the personal computer happened.

1984–Present: “Revenge of the Nerds”–The Age of Personal Computing

There wasn’t much you could do with home computers in the early days. They were essentially toys; you could play games on them, and perhaps do a bit of word processing. And these “toys” were marketed almost exclusively to men and boys.

As a result, as NPR’s Steve Henn writes:

This idea that computers are for boys became a narrative. It became the story we told ourselves about the computing revolution. It helped define who geeks were, and it created techie culture.

It was at this time that pop culture gave rise to the stereotypical male nerd–the image that we’d probably think of today if someone were to ask us to imagine a computer programmer. Movies like Revenge of the Nerds and Weird Science featured, as Henn puts it, the “awkward geek boy genius [who] uses tech savvy to triumph over adversity and win the girl.” Video companies marketed their consoles as toys, and toy stores stocked video games in the boy isles. Ads for computers primarily featured men and boys, while women were usually absent, marginalized, or sexualized, appearing as wives or product models.

But how did all of this contribute to women falling out of computer programming fields?

Researcher Jane Margolis, who interviewed hundreds of computer science students at Carnegie Mellon University, found that families were much more likely to buy computers for boys, and keep them in their sons’ rooms, even when their daughters were interested in computers, too. This proved problematic when these kids arrived in college. It meant that boys, who had grown up with constant access to computers, were often way ahead of the girls.

Failing to fit into the stereotypical “geek” culture and lacking the know-how and experience of their male counterparts, girls began dropping out of the computer science field.

Indeed, today, less than one in four computing jobs are held by women, and the number of female computer science majors is holding steady at a low 18 percent–half what it was in 1984.

In the “manifesto” mentioned at the beginning of this article, the writer argued that the reason there aren’t more women in tech is because of biological differences in traits between men and women. He therefore decried Google’s initiatives to increase diversity as “unfair, divisive, and bad for business.”

Yet history, as we’ve seen, negates this assessment. For one, many women do have a natural knack for tech–and the complex analysis and problem solving ability that are so crucial to initiating breakthroughs in the field. And history has shown us that women programmers are great for business.

It’s worth remembering and celebrating women like Jean Bartik and Grace Hopper. Not only because the world is better for their contributions, but because their stories give us a glimpse into how computing might be different today–especially in an age when technology touches every part of our lives–if women were still leading the way.

But, looking to the future, Google itself would perhaps do well to realize that the correct question is not how to bring more women into tech, but how to bring them back.

Chava is a writer and curriculum designer. She’s also a classically trained singer and performer. Currently, Chava works for Ptex Group as Communications Director for their business growth platform, Let's Talk Business (LTB), dedicated to bringing together Jewish entrepreneurs and empowering them with the tools to learn, grow, and succeed. You can connect with Chava on LinkedIn and see more of her writings on Chabad.org.