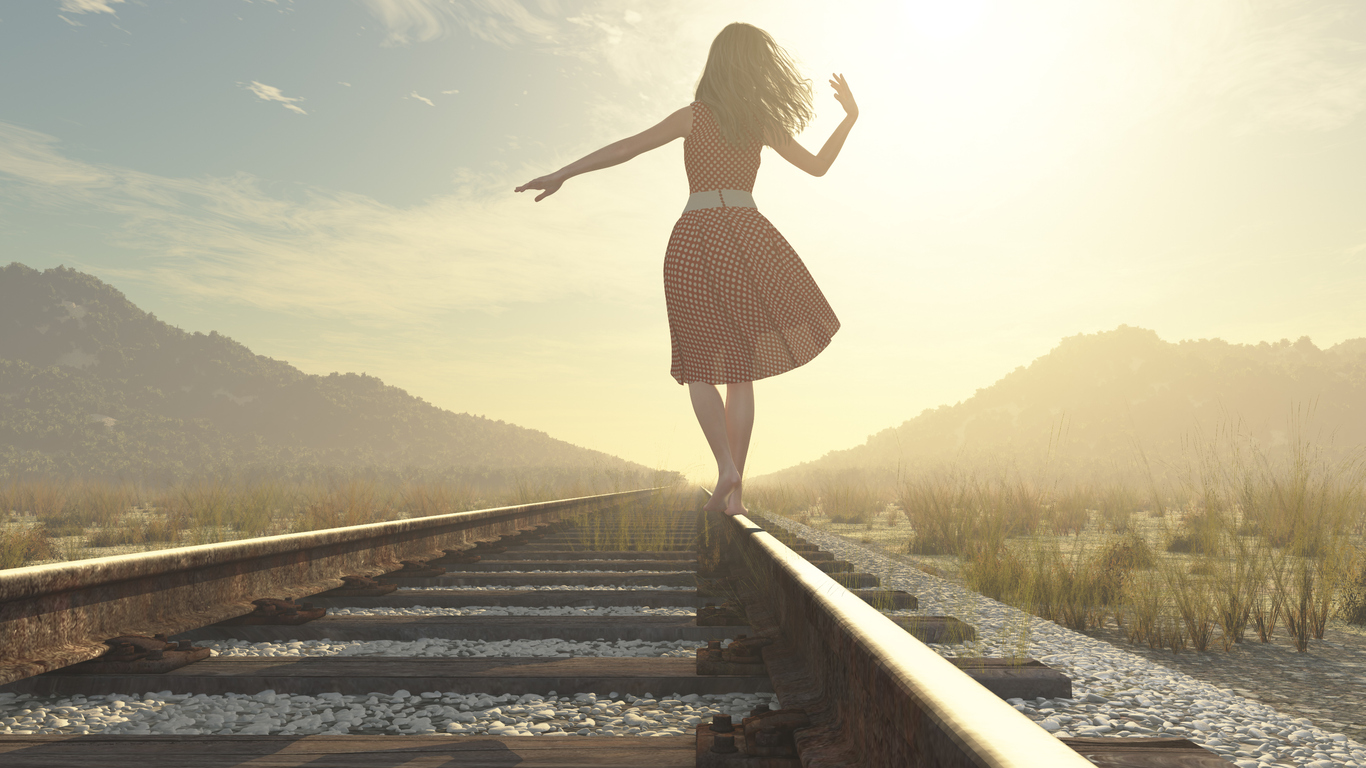 Chutzpah.  I don’t know where I got it.  Definitely not mom and dad whose insecurities drove them to deaden my spirit on a regular basis.

I was 22 and working as a secretary, a job I hated.  I discovered early on I didn’t like working for anyone.   My parents were in business for themselves and of all the ways I wasn’t like them, this was one way that I was.

I had been dating a married man who recently moved his family from Los Angeles to Boseman, Montana.  Longing to see him again, in combination with another miserable day at work was enough for me to call it quits.  Almost simultaneously with giving notice, I got the hair-brained idea to take a Greyhound bus around the western United States.  It wasn’t a coincidence the route would include a stop in Boseman, Montana.

I saw my married man once more, at which time he made it clear he would be staying married (yes, I should have known better).

As the bus took me from one blink-and-it’s-gone town to another, I pondered what to do with my life.  I had no job, no man, and was basically a lost soul.

The last stop was Sun Valley, Idaho, a resort town famous for its socializing and great skiing.   It was October, only two months before the slopes would be crowded with vacationers celebrating the holidays.

Although I was still grieving the loss of my lover, a tiny corner of my mind thought, “It could be fun working here in the winter.”

So I tried to get a job as a maid or waitress, jobs typically available.  If I hated being a secretary, you can imagine how I’d feel working as a waitress or maid.  Turns out it didn’t matter; all those positions were already taken.

The bus was about to head back to L.A.  I boarded feeling defeated.

And then I noticed a coffee shop a few doors down.  I checked my watch. I had five minutes. One more shot, that’s all I wanted.  I rushed off the bus and down the street. Once inside, I asked for the owner.

I tapped my foot anxiously while I waited.  If the manager didn’t show up soon, I’d have to leave.  Finally, a plump middle-aged woman approached me.

“Do you have any jobs for the winter?’  I asked.

Just then I heard an awful piano player in the bar adjacent to the coffee shop.

In that moment, a flight of fancy took hold.  And a lot of chutzpah.

“I play the piano,” I heard myself say.  I hadn’t touched a piano in at least 10 years.  If she had asked me to audition, I couldn’t have done it.  In my favor, I was a young, pretty woman who could be charming when I applied myself.  And evidently I had a trusting face.

“We’re thinking of opening a bar on the other side of this coffee shop.”

I wasted no time responding. “If you send me my train fare, I’ll come play and sing for you.”  Why did I throw in singing? I hadn’t a clue as to how to sing.

She said, “Let me think about it.”

I gave her my information, and re-boarded the bus with a little spark, a new energy that had been absent the past several days.  Then I wondered if I would actually ever hear from her.

Since I had no job waiting for me when I got home, I considered returning to my old piano teacher for a brush up, but money was tight, and I figured… why take piano lessons when I don’t even know if the woman was going to send me the check?

So I waited.  And waited. And waited some more.  And then one day, the check came! I had actually been hired to sing and play the piano professionally!  Only as I said, I didn’t know how to sing and my skills as a pianist were rusty. But I had confidence I could get up to speed in spite of the fact that now I had only two weeks left to get ready.

I drove to my teacher’s house in West Hollywood, eager to get the few lessons I thought I needed out of the way and start my new job.

“Play something for me,” Harry said.  I played the easiest number I could think of.

“Stop!” he said forcefully, after I had played just a few bars.

I looked at him quizzically.

“You’ll have to start over from day one as if you never had a lesson.”

“I don’t care,” he said emphatically.

I practiced eight hours a day at his house, four hours in UCLA’s practice rooms, then four more hours at my apartment.

I took three lessons a day, practiced 16 hours a day, and at the end of two weeks, my piano teacher said, “I’ve never seen anyone do anything like this before.”  I smiled. I had done it!

Harry drove me to the train station.  We hugged goodbye, and on the train, every waking moment I air played the songs I had learned.  Scales, too. Chords. Oh, by the way, I never did learn how to sing. I couldn’t find a teacher and there wasn’t time, anyway.

When I arrived in Sun Valley, I was struck by how beautiful it was.  There was snow everywhere, a real novelty for a southern California gal.

I rented a room above a house and unpacked my things.  That night, I started my first job as a professional pianist and singer.  I was terrified, but I had to do it. I had made a commitment, and by God, I was going to keep it.

A week later, I was fired.  What immediately came to mind is that it must have been my singing.   Regrets began to creep in. If only I could have found a voice teacher.  If only I had had more time.

Fired, broke, and far away from home.  What could I do now? I had no answers.  So my next bright idea was to go to the Sun Valley Lodge and have my hair done at their beauty salon.  As the stylist cut my hair, I told her of my plight.

“I think Warm Springs Ranch Inn is looking for a pianist,” she said.

“A beautiful restaurant overlooking a creek.  Hemingway used to hang out there.”

“Hemingway used to hang out there?”

As soon as I left there, I made my way out to the restaurant.  Sure enough, they were looking for a pianist. I didn’t say a word about singing and I got the job!  The beauty shop was a bright idea after all.

The restaurant had a warm, inviting atmosphere. And I loved that Hemingway had been a regular.  He was one of my literary heroes.

Each week a new influx of travelers came to eat and drink and listen to me play.  I met so many nice people, some I became attached to even in the short time they were there.  I’d get friendly with them and then feel lonely when they left. After six weeks, I decided it was time to go home.

Back in L.A., I took a mere three more weeks of piano lessons.  Harry told me I wasn’t supposed to sing and play the melody at the same time.  Wow. That was news to me! He taught me scales and how to sing on key. And that was the extent of my music training.

I soon got my first job in Los Angeles.  No small accomplishment. There were many more musicians than there were jobs.  I went on to write songs and record some of them. Other artists recorded them, too.  Recording in a studio with an orchestra, or even just one guitar was exhilarating. Sex, chocolate, and fireworks all at once.

I made an eight-year career out of singing and playing the piano. Although technically I had a boss, it didn’t feel like it.  My purpose was to entertain, and as long as I did that–which I loved–I was completely left alone. I performed at a posh Beverly Hills hotel where I got a $100 tip for one song request.   I even performed in Alaska in the winter.  That was an adventure!

My chutzpah enabled me to forge a whole different life for myself.  You can do it, too. Be spontaneous and throw caution out the window once in a while.  You never know what joy a little chutzpah can bring to your life.