Why It’s So Hard to See the Real Bill Cosby 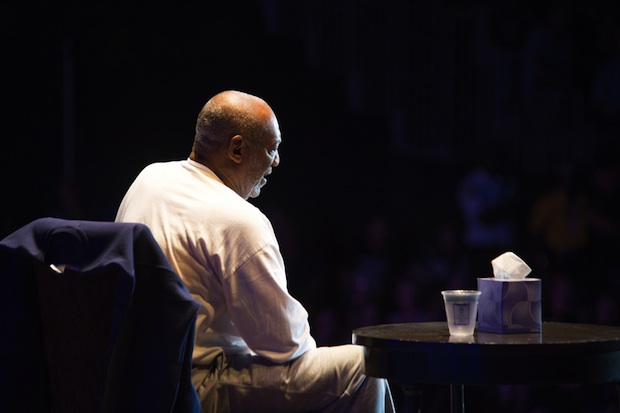 I wrote this review of Michael Whitaker’s 500+ page definitive biography of Bill Cosby, Cosby: His Life and Times, a week before the eruption of sexual assault and abuse charges against Cosby. I held back posting it on TWD because, like Whitaker, I consciously chose not to mention in my review the longstanding charges of Cosby’s sexual predatory behavior. Last week Whitaker tweeted, “I was wrong to not deal with the sexual assault charges against Cosby and pursue them more aggressively.”

Listening to the close to 20 women who have come forward and in strikingly similar detail, describe how Cosby targeted them – using his power and status, gaining trust by promising to help their careers, drugging and sexually assaulting them – I have decided to post my review as written, knowing that as you read it you will/should feel uncomfortable, if not disgusted, given what has transpired. Following the review is a coda I hope you will read – a reflection on my own complicity in nurturing the “rape culture” that we see in our country today.

Review:
Do you remember the first time you heard Bill Cosby’s comedy routine of Noah’s dialogue with God? Cosby, in his booming voice playing God, tells Noah,” “You got two male [animals] down there. You gotta bring in a female.” Noah shouts back: “I’m not bringin’ nothin’ in. You change one of ’em!”

I remember laughing so hard I would have to move the needle back on the record to hear what I missed. (I know my own kids won’t recognize this way of listening.) For a middle school kid in Jewish parochial school, it was not only hysterical but also revolutionary: approaching the Bible with incredulity, questioning, humor and irreverence. Like millions of people, I never thought of Noah the same way again… and I never studied Scripture the same way again either.

Mark Whitaker, a former editor of Newsweek, has written Cosby: His Life and Times the first major biography of Bill Cosby to get cooperation from Cosby himself. It is a wonderful read – fun, well written, fascinating and filled with details about Cosby that remind you of just what a genius he was. He was radical by being warm, plain-spoken, never profane and always universal. He didn’t sing, dance or play the fool. He was a Black man who told jokes not about the Black condition but the human condition and thereby made people of all races laugh at the things that we have in common, not the things that divide us.

In ISpy – which ran from 1965 to 1968, Cosby was the first black man to star in a television drama, alongside Robert Culp, and he won three consecutive Emmy Awards for best actor – it was friendship and loyalty that we all recognized. In the cartoon Fat Albert, it was in the adventures and interactions of kids that we saw ourselves. In the groundbreaking TV sitcom The Cosby Show, it was the daily workings and ordinary familiar craziness of the Huxtable family: parents parenting, spouses figuring out how to balance work, kids, and marriage, and children navigating the joys and pains of growing up.

Cosby was subtly subversive showing an upper-middle-class Black family strongly connected to their culture – remember the African-American art on the Huxtables’ walls and jazz music playing in their home. Whitaker shows rather convincingly that Cosby’s work was a revolutionary contribution to racial politics – he was the “embodiment” of Martin Luther King’s integrationist politics. In fact, Richard M. Nixon was so frightened of his reach, and of his support of civil rights causes, that he put Mr. Cosby on his enemies list.

Whitaker covers all the requisite biographical details – a painful and lonely early childhood, an alcoholic father, financial problems and a brother who died when he was seven. We follow the ins and outs of Cosby’s rise to fame. And we learn about the devastating trauma and aftermath of the murder of Mr. Cosby’s only son, Ennis, in 1997. All of which helps us understand that like so many comics, Cosby knew from experience that people go through life with a lot of sadness and pain and if you can just make them laugh, it offers them a release.

But the wisdom that stood out for me in this book? As central as politics and law are to change a society, culture – particularly popular culture – played an essential role in transforming race relations in this country. Cosby once wrote about his comedy, “No big setups. No knock-’em dead ringers. Just plain ole Mankind on Review.” Yup, whatever our differences we are ever so slowly coming to realize that we are all part of old “Mankind on Review”. It is no stretch to claim a direct line from what comedian and actor Bill Cosby has meant to audiences Black and White for more than five decades and the election of the first Black President.

Coda:
Wisdom rarely comes in the form of neat answers but in questions we sit with that challenge our comfortable assumptions and evoke new insights. Here are questions I have asked myself over the past two weeks.

Why did I ignore the claims of women going back as far as 2006 who with nothing to gain and the statue of limitations expired, to this day have been brave enough to speak out publicly against a powerful entertainer?

Why did I subconsciously side with Cosby?

Did I confuse the character Cliff Huxtable and his emphasis on family values with the person Bill Cosby?

Did I allow Cosby’s “success” to be the only calling card that mattered?

Did I let “times were different back then” or “boys will be boys” keep me from seeing the seriousness of this?

More darkly, did Cosby’s critique of young Black Americans (“pull up your pants”) and his version of America where all people (addressed primarily to Black Americans) are responsible for pulling themselves up by their own bootstraps subtly “free” me of responsibility to take seriously the impact of racism and bigotry on people’s lives?

Did I unconsciously block the disturbing truth about Mr. Cosby because his approach to life and work represented a corrective to the self-defeating urban Black ethos, which conveniently “removed” the obligation I might have do anything to fight racism?

Was I reluctant/afraid to criticize a high achieving Black American?

Did I simply not want to deal with the messiness of a world where Bill Cosby is a sexual predator?

Here are some things I have learned:

Having been sexually abused in high school, by people who had status and authority in the community, I should have known that the “normal” way of thinking about things doesn’t operate in these situations. For a variety of very understandable reasons one doesn’t always remove oneself from the situation, and one doesn’t contact authorities, and one only comes to understand things years later, and one does, as unbelievable as it sounds, often continue a relationship with the abuser.

Estimates are that 60% of women do not report being sexually assaulted to the authorities, and that more than 95% of men charged as rapists do not spend one day in jail. Sexual assault in our country is at epidemic levels.

So knowing hindsight is 20-20, my questions now have nothing to do with Cosby. They are simply:
How in the future will I respond to women who tell us that they have been sexually assaulted?

Will I view their claims as if made by my own daughters, wife, or other loved ones?

We all “loved” Bill Cosby and so did not want to think he was capable of being a sexual predator. But life is messy and it is time to stop covering our eyes and ears.