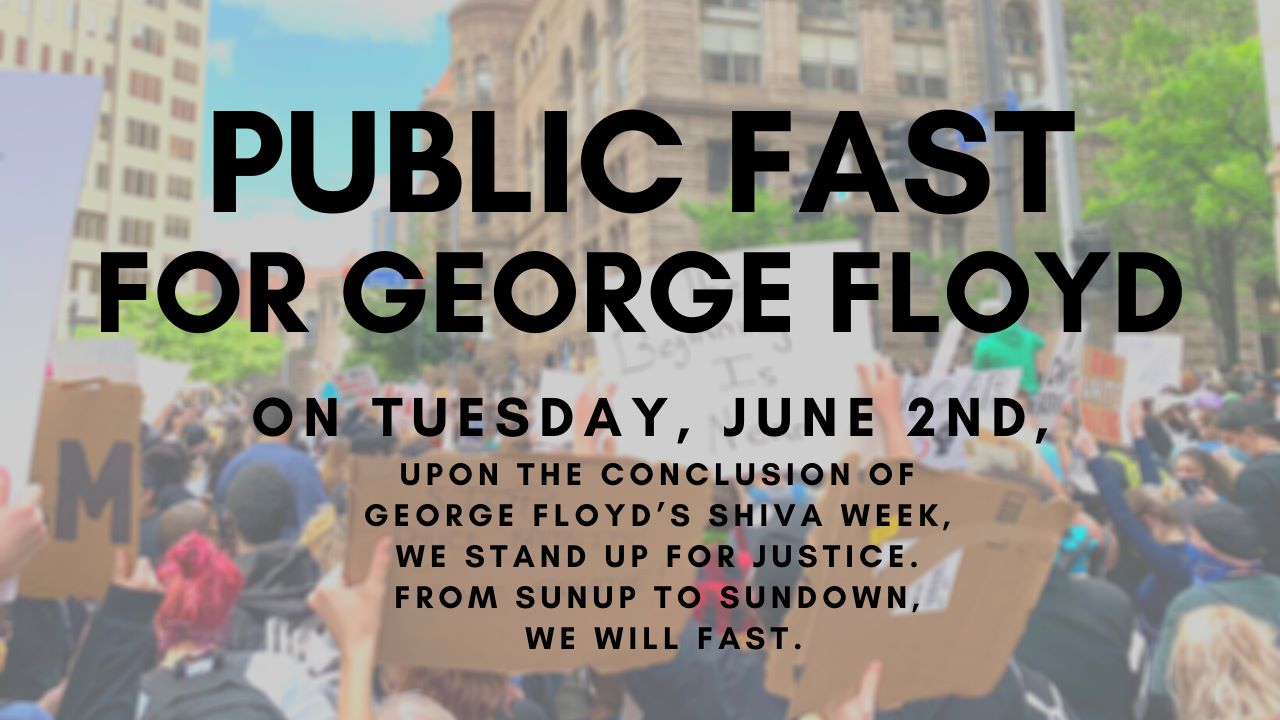 This is deeply personal, and I fear, will be often misunderstood, but here I go:

As soon as Rabbi Jeremy Markiz contacted me about his idea of fasting in observance of the conclusion of George Floyd’s Shiva — Shiva being the Jewish week-long mourning period — I knew I would observe this practice, which is saying a lot.

It’s saying a lot, not because I find it particularly difficult to fast. I don’t. It’s saying a lot because even as millions of people are responding in so many active ways — many in anger, some with violence, others with threats, some with prayers, and others still, with political posturing — I have found myself left mostly cold by most of those responses, even as I too feel pain, frustration, and anger in the wake of Mr. Floyd’s killing at the hands of a police officer.

Over the past week, the usual players, in this all-too-usual drama, take their usual spots on the national stage and assume their usual roles. You know who they are: the marchers, the burners, the taggers, the looters, the baton-wielding police officers, the law-and-order loudmouths, the consoles, and the analysts, just to name a few. They all have their job, and they all keep doing it because they know it so well. But change happens more when we realize what we don’t know, not when we confirm — in both words and deeds — what we already do.

Perhaps some, or even all, of the most common active responses we are seeing now, have a rightful place in the working out of both justice and building a better world. I don’t know, and truthfully, neither do any of the people advocating for them, even when they say that they do.

What we can all know, is that all of those responses are predicated on so many presumptions and assumptions about what the problems “really are”, and how they should be addressed and resolved — let alone the amount of displaced rage and anger that is driving both those violating the law and at least some of those upholding it — that when people choose to act, they are mostly talking to themselves and letting/forcing others to listen. And to those who would tell me, “You’re damn right, we are forcing them to listen,” I would say that while we can force others to listen, it’s virtually impossible to force someone to hear.

So as I am struggling with what it is that people can hear — not just what I want them to hear, but what is hearable, given where they are on any side of this moment — and even more so, with what it is that I need to hear better, I am fasting. Fasting is a powerful tool for cultivating better listening and better hearing, and that is why I responded so immediately to the invitation to today’s fast.

I am fasting today because when Jeremy contacted me about the idea, I was struck by something he wrote, and it was not any of the classical Jewish texts he shared, as beautiful as I find them. It was his statement that he was fasting because doing business, as usual, made no sense, and at the same time, “It’s really hard to know what to do right now.”