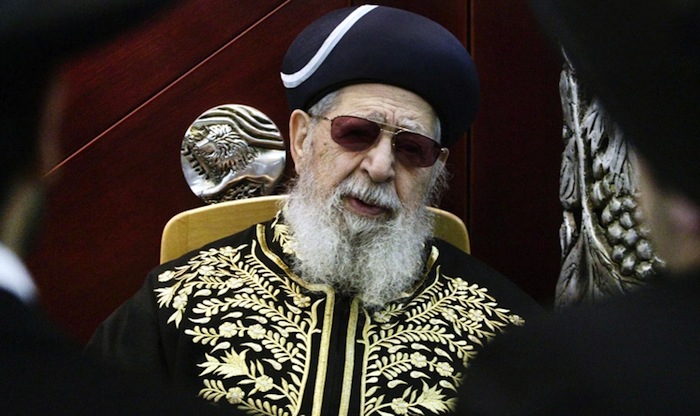 When nearly one million people attend a teacher’s funeral, as happened this week in Jerusalem, one can’t help but pay attention. Rabbi Ovadia Yosef, was a cultural, spiritual, intellectual and even political phenomenon. ?A former chief rabbi of Israel, the?spiritual leader of the Sephardic ultra-Orthodox Shas party, and a teacher revered across many ethnic and religious borders, he?was?buried this week?in the largest funeral in Israel’s history. ?His enormous popularity can teach us so much about what it means to be a great teacher and how we can find the great teachers we seek for ourselves — Jewish or not, religious or secular.

We all need guides and sources of inspiration, even as we may be guiding and inspiring others. Finding them is often as much about knowing what to look for as it is about anything else.

As Rabbi Ovadia Yosef was laid to rest this week, I thought not only about what I learned from him, but about all the great teachers I have had, and what it is that defined their greatness. Rabbi Ovadia, as he was known, was a model of what to look for, and not because he was a rabbi or because he was Jewish.

Although he remained passionately and proudly ultra-orthodox, he took many daringly progressive positions in matters?of Jewish law and culture. ?While most rabbinic authorities dragged their feet in accepting the Jewishness of new immigrants from Ethiopia, who both looked different and practiced differently from almost all Israeli Jews including him, Rabbi Ovadia championed their full authenticity of their Jewishness. ?While other rabbis argued about the propriety if ceding land to the Palestinians in order to make peace, Rabbi Ovadia insisted on it being the right thing to do. ?And while he was very much a scholar, he was as comfortable chatting with peddlers in the street as he was lecturing before fellow scholars.

Great teachers are passionate about people — typically even more than they are about what they teach. They love what they teach, but they love those they teach even more, and make sure that their students know it.

Great teachers are sources of surprise at least as much as they are of information. They stretch us as much as they comfort us, and liberate us to see ourselves as more worthy and able than we probably ever imagined we were.

Show me a teacher who does these things, and I will show you a teacher worth following.

Have you had great teachers? What defined them? Why do you consider them great? What makes them truly memorable?