“What If?”: Inside Llewyn Davis 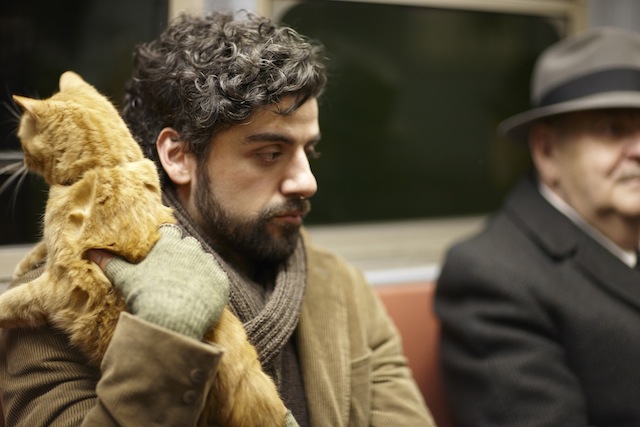 I walked out of the theater after seeing?Inside Llewyn Davis,?the Coen brother’s phenomenal new film feeling as I always do after seeing a Coen brother’s film: humbled, dazed, out of breath at the mysterious, subtle, and unpredictable relationship between our own individual stories and dramas with all their twists and turns and the cosmic, metaphysical reality which we have absolutely no control over. With their unique attention to detail, aesthetic, and character, the Coen brothers invite us to reflect upon the meaning of life in general and of our own life in particular.

The film follows a cold winter week in the life of Llewyn Davis, a young, handsome, charismatic (and troubled) folk singer, as he navigates the Greenwich Village folk scene of 1961 – months before the folk scene will explode. Davis is struggling to make it as a musician against seemingly insurmountable obstacles – no money, no place to live, a dying father who can no longer communicate, a conventional sister who is tone deaf to his dreams, and the suicide of his singing partner that has left him bereft. Llewyn is very talented – more talented with greater depth than most of the people we hear perform: his singing is textured, soulful and heartfelt. In fact, only through his singing do we get?inside?Llewyn Davis and feel his sadness, anguish, anger, self-doubt, tortured faith in himself and the world.

The movie ends seeing and hearing the?young Bob Dylan in the background performing for the first time at the Gaslight, the center of the new folk scene. We feel the energy of the moment and know there will be so much success for many of the performers we have seen throughout the film. Will Davis be one of those who make it and benefits from the folk craze about to sweep America and we have gotten to see the struggling artist just before his success – the darkest hour before the dawn as Dylan sings? Is Davis not talented enough to make or just unlucky that the stars were not aligned?

The Coen brothers leave it up to us to decide and how we answer these questions says so much about our values and beliefs about the world.??What is the relationship between success and making it anyway? If Davis sacrificed for his art, sang his songs with authenticity, moved people and was someone who set the ground for the flourishing of the music he loved but didn’t himself become known or even remembered was he a success or a failure?

But the Coen brothers go even deeper, not only inviting us to think about what makes our lives significant, but compelling us to face the truth about how much our personal story is “simply” part of waves and forces so much beyond our control. How our lives play out are the consequences of a seemingly infinite number of “What Ifs?”?What if Davis’s musical partner hadn’t died? What if Davis had come around the scene a year later? What if the right producer or promoter was in the club one night when he played? What if he had chosen not to go solo and instead joined another group? What if? What if??What if?

As 2013 winds down there are inevitably so many?”What Ifs?” in our lives this past year. What is the wisdom of What If? Perhaps “What If” cultivates humility about this wild journey we call life. There is such a thin line between failure and success, tragedy and triumph, fate and destiny, despair and hope. So whether it has been a difficult year or a successful year, “What If” should remind us not to despair too much on the one side or gloat too much on the other, as all we really can do is the best we can. Our failures and especially our successes have far more to do with luck, coincidence, happenstance, circumstance and grace than we imagine.??Yes, this is humbling but maybe this also evokes a bit of awe and wonder at this cosmic drama we are all part of… and then the choice we do have control over: to be grateful and to love with all our heart. That’s good enough for me!