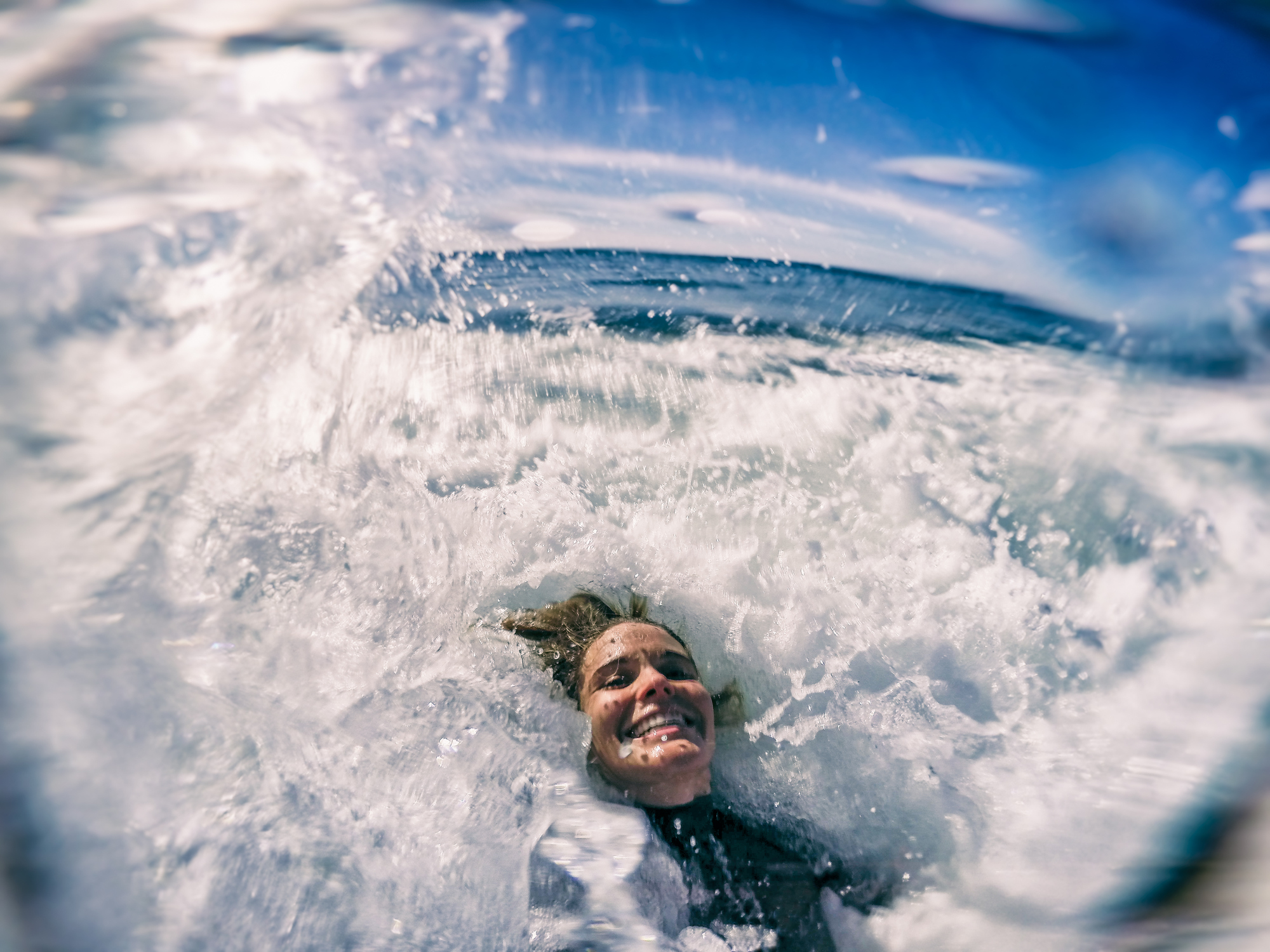 It’s summer, and my husband, Daniel, and I are walking along Surfrider Beach in Malibu, admiring the surfers. With envy, I watch them swim way out, where they can catch the swells before they break.

“I want to swim out there,” I tell Daniel, pointing.

He knows that when I go to the beach, I stick close to the shore. I skip through the wavelets at the edge, but never do I actually swim. The Pacific is colder than the Atlantic, the ocean of my childhood; the idea of plunging my whole body in at once causes me to shudder.

And then, there’s fear: Even back in Maryland, I was toppled by waves, and the ones here in California intimidate me. When we had children, they were so small, and unable to swim, and I grew petrified that they’d be swept away by a wave.

But here, in Malibu, on a perfect, sunny day, I realize that I want to swim far out, into the deep.

It’s three days later, and we’re flying a kite in Redondo Beach. Again, I see people swim way out, and I want to be like them. The only thing holding me back, I know, is my fear. That and the fact that, today, I’m in street clothes.

“Are you sure?” He’s confident in the ocean, having grown up in Orange County, where he swam in the Pacific from an early age. But he’s seen the look on my face and knows I am quaking inside.

“There’s no real reason to be afraid,” I say, “not anymore. The kids are big now–they swim like champs. And I’m a strong swimmer. If I can swim laps in the pool three days a week, I can swim in the Pacific.”

“Fine,” he says, after measuring my seriousness with another searching look. “We’ll do it next week.”

We pick a day; Daniel finds the perfect beach: level and sandy. There’s a lifeguard station in the little cove, and it’s less crowded than Malibu or Santa Monica. It’s ideal in every way.

When the day arrives, Daniel packs up the car, and we drive with the kids down to Torrance. Forty-five minutes later, as we spread out towels out on the shingle, Daniel asks me, “Still planning to swim?”

I nod my head vigorously, then add, “Will you hold my hand?”

But I’m impatient. He doesn’t have his sunscreen on yet, and if we both swim out, who will keep track of our youngest? So, I just go for it–I swim way out, arm over arm, past the cresting waves. My body floats up and down with each swell, but I can swim!

It’s nothing–so easy! What was I worried about, all those years?

I look towards shore, and Daniel is watching. I wave, then swim back to shore.

“It’s amazing!” I declare, then grin from ear to ear.

My eldest puts on his goggles, then follows me as I swim back out. My husband takes our youngest by the hand and gradually acclimates her to the pounding of the waves. Our 13-year-old comes in next. Eventually, we’re all in the deep, salty ocean, squealing, almost drunk with the moment.

There’s a feeling you get, when you do difficult things: risk embarrassment or heartbreak, overcome a physical challenge, confront a fear. It’s a feeling of exultation, of deep, deep joy. That’s what I am feeling: I’m enchanted by the majesty of God’s ocean and my own power to swim in it. I’m so happy, I’m crying salty tears that merge with the Pacific.

As we rise high with a passing swell, then drop, my nine-year-old proclaims: “It’s almost like a roller coaster!” I’ve conquered my fear, yes, but there’s more, I realize. I’ve given my children permission to go for it; to respect God and nature, but also to trust their bodies, their strength. Now, they can dig deep and take the plunge.