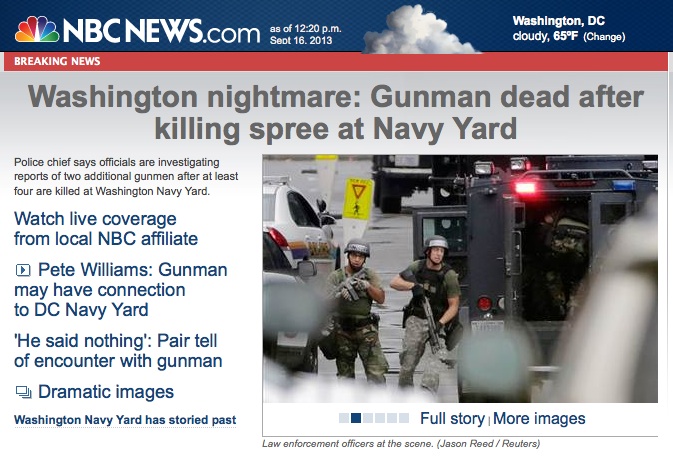 With multiple people dead, including at least one shooter, the scene at the Washington Naval Yard remains chaotic.? In terms of the most important questions, what we don’t know, far outstrips what we do.? How many victims in total?? How many attackers?? What prompted the attack?? Is it part of some larger plan of attacks?? We don’t know the answers to these questions but I bet that we all have immediate responses to the attack anyway, and that being aware of them is a pretty powerful diagnostic of the national sense of anxiety over terror.

Ask yourself the following:? what were your first thoughts when you heard the news.? Did you have an immediate suspicion of who did this or why?? What questions were most important to you to have answered, and why those questions?? Did you have any sense that you were somehow more in danger, even if these events were transpiring far away?? Were you more curious about the victims or the perpetrator(s)?? Why do you think that might be?? Was there an impulse to check on those you love, even if they have nothing to do with events in the capitol?? If so, what is that about?

Our responses to attacks like one in DC can tell us a great deal about who we are and what really animates us.? Without judging any of the responses, as a nation suffers mass attacks in public settings, at a seemingly increasing rate, it pays to know what we bring to the challenge of keeping us safer.? That is an important distinction between a wise response and those that are less so.