“There Was Only One Side To Blame”: A Charlottesville Activist Speaks 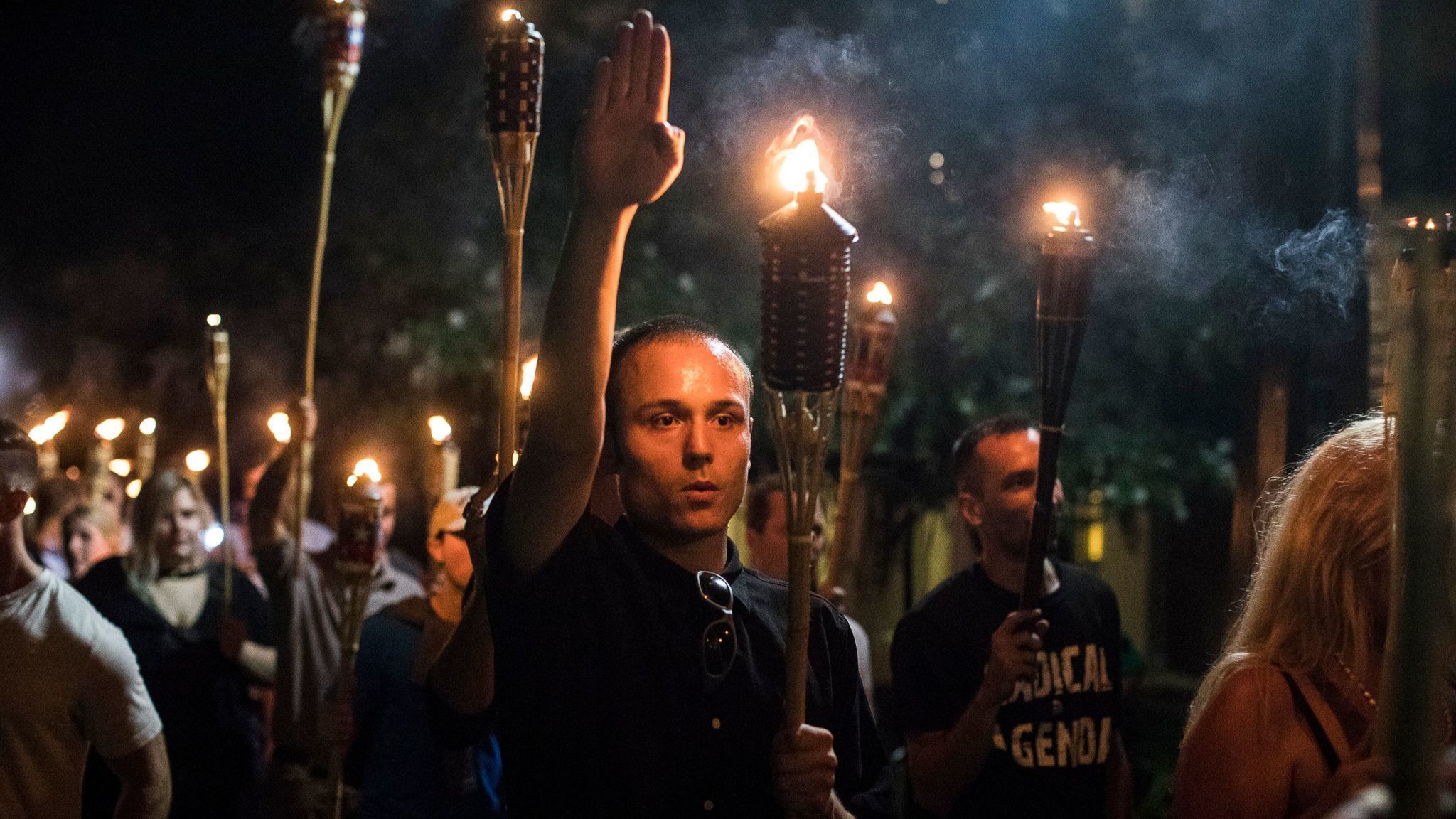 For many people, the march in Charlottesville was a turning point, a red flag so glaring that they could no longer ignore the rising hatred and bigotry that has been sweeping our country.  For those people, Charlottesville was a clear battle between good and evil, between Nazis and those who would put their lives at risk to oppose them.

But, for some people, the ones who have spent the last year supporting Trump, defending his every move… no matter how outrageous… Charlottesville still remained an open question.  Was this really about peaceful people exercising their right to free speech? Were the counter-protesters brave heroes or violent trouble makers?  Were both sides equally to blame?

For these answers, they turned to the one person they could trust, the man who they believe has all the answers about how to make America great again. Donald Trump. His response was to say that there was blame on both sides and that there were some “very fine people” marching who were “there to innocently and legally protest.”

On Monday I went to a peace rally in honor of Charlottesville.  A few local leaders spoke about unity and vigilance.  We sang songs of love and peace.  We hugged each other and made new friends.  It felt good and safe and healing.

And then a man came into the middle of the room.  A man who did not look like he felt safe or healed. His voice shook as he told us of the violence he had seen in Charlottesville, of the trauma that impacted him so deeply that he cried for hours when he came home.

I knew that I had to talk to him.  I needed to understand if what the president had said was true.  Was the violence really on both sides?  Were the marchers peacefully protesting?

John Mulligan told me a little bit about what he experienced.

“I took the train to Charlottesville the night before the rally.  When I arrived, I heard some protestors behind me, so I went over to them.  They were mainly students from the University and they were surrounding the Jefferson Memorial.  I joined them and that’s when the tiki torch Nazi parade came down off the steps of the University building.  I couldn’t make out what they were saying at first but then I heard. ‘Blood And Soil.’ We started chanting back ‘No Nazis, No KKK, no fascist USA.’

The students were locking arms, circling the Jefferson monument to try to hold their ground in peaceful protest. There were some Anti-fascists there and some reporters.  The Nazis came down and encircled us in waves. They kept circling and circling until all the Nazis had come down off the march.  They were in organized rows of 4.

It was extremely intimidating because we couldn’t see the end of the line. They just kept coming.  Before we knew it, we were completely surrounded 10-15 feet deep in tiki torches. And it didn’t take long for them to start macing us, teargassing us and for fights to break out around us.

The students were scared. Very scared.  I was scared too.  The Nazis were chanting ‘White lives matter,’ they were Nazi saluting.  They started throwing tiki torches at us.  The anti-fascists were fighting them off.  I picked up a tiki torch and threw it over the crowd.  I didn’t want to antagonize them, I just wanted to get it away from us. Then they started dousing us with the tiki torch liquid and trying to burn us with the torches.  They were waving the torches in our faces and trying to swat us down.  It got to the point where we decided we had to abandon the monument.

We had a woman in a wheelchair who was doused with kerosene that we were trying to keep from catching on fire while getting her out of there. At that point, everyone was panicking and scared.  Finally, the cops came out and dispersed the crowd.  As soon as the cops approached, I heard one of the Nazis yell, ‘The cops are here, put out your torches,’ and immediately all the torches went dead, the crowd backed off of us and the cops came in and broke up the scuffle. They ordered it an ‘unsanctioned gathering’ so we dispersed.”

By John’s accounts, the fighting continued throughout the evening and next morning, with almost no police presence.  In fact, it wasn’t until right before the official 12 pm march time the next day that the police intervened at all.

And, even then, he said, the police offered no protection for the parks that the counter-protestors had gained permits to occupy.

“We were there to protect the peace protesters, the chanters, the wounded people, people who couldn’t see because of tear gas, the medics, all the people who were non-violently protesting.  Because the police definitely weren’t doing it.”

Even if they were defending the peaceful protesters, was violence necessary?  The Southern Poverty Law Center just released a statement saying that we should not debate hate group members in conflict-driven forums. To, instead, stage peaceful protests at a different time or location.

But, John still feels like having a presence at the White Nationalist events is helpful.

“The whole event was a humiliating defeat for them.  As we see in all these vigils going on around the country in support of the Charlottesville people who stood against this hate. They are shamed and I hope more of them lose their jobs.  I hope when they go home feeling like heroes, and their families and friends shame them,  they’ll start to think about what actions they took and how they hurt people.

The backlash against the rally has been so dramatic, that I think they failed in every conceivable way.  The man who organized the rally, Jason Kessler, was chased off of his press conference, the Daily Stormer was taken down. It made a difference.

This movement is a movement to shame the Nazis and protect peaceful protestors.  I don’t advocate violence.  I’m not violent.  The violence could have been prevented if many more counter protestors showed up.  That humiliates the Nazis, makes them cower and leave. But, when the numbers were so matched and they were so heavily armed and ready to terrorize Charlottesville, we had no choice but to protect ourselves.

I believe in the First Amendment.  But, if you’re going to spew hate, don’t be surprised if someone throws a tomato at you… or a rock.”

If you don’t want to attend a white nationalist rally as a counter-protestor, there are other ways to help the resistance.

“Go to protests, go to vigils.  All of that boosts our morale.  Or get involved by calling about local issues.  Call the Mayor of Philly and tell him you want the Frank Rizzo statue taken down or the Christopher Columbus one.  We have a ton of racist organizations in local areas that need to be dealt with.”

I thought of my own small suburban town.  The idea of white nationalists and counter-protesters battling in our streets seemed inconceivable.  But, as John explains it, Charlottesville is not so different.

“This was a nice, clean suburban town.  People were sitting on their porches drinking coffee while we were fighting in the streets.”

That was the image from John’s story that stuck out to me the most.  This battle against fascism is not just happening in remote towns far away.  It’s happening in little towns all across America.  John explained how he saw the roots of this movement when he was a young man living in a “nice” suburban town.

“When I was young I was into the punk rock scene locally and clansman would come around to recruit us.  They’d come to concerts and pass out flyers.

Those skinheads faded away, but not really, because they grew up to be the leaders of the alt-right and they got involved politically.  They took off their Doc Martins and bomber jackets and grew their hair and they put on nice clothes and began influencing politics.”

When those skinheads are supported by the highest office, when we are told that they are “fine people,” when we try to minimize the danger that they present, white nationalist groups will continue gaining strength. It is on all of us not to let that happen.