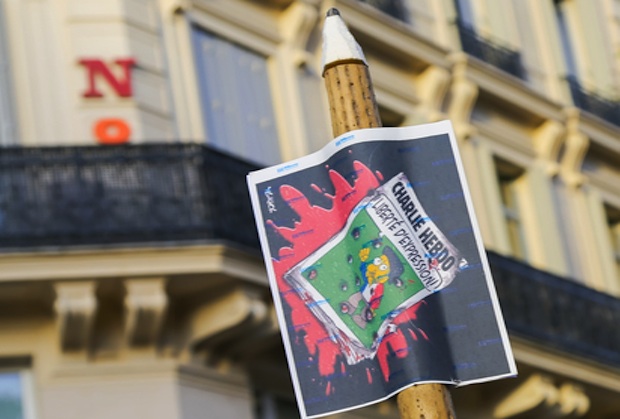 It is a very serious time in France, especially for the Jewish community. And yet, at the center of the storm is a very unserious entity, the satirical magazine Charlie Hebdo. Its editors may be best known for caricatures of Muhammed (venerated as a prophet by many throughout the world), but they made their living by ridiculing just about anything anyone took seriously, including themselves.

The cartoonist known as Luz, who owes his survival to running late to an editorial meeting, has expressed how the assault that robbed him of his friends and colleagues also left his self-identified “irresponsible journal” carrying the kind of weight and societal burden it was neither made for, nor ever sought to bear.? Perhaps the new edition he helped produce will drive home the message; it may also shed some newer admirers, who may fit more in his cross-hairs than as his target readership.

To call oneself a clown is both a self-deprecating reminder not to be too serious, and an assuming of a very important role.

The issue’s cover features Luz’s reprise of his Muhammed caricature, holding a “Je suis Charlie” sign under the banner “All is forgiven.” Some have interpreted this as a bittersweet gesture of reconciliation, but there’s certainly a biting irony, as well. A cartoon inside the magazine more directly makes the point that the slain cartoonists of Charlie Hebdo were not great fans of reflexive piety, even on their own behalf; it depicts French leaders and other dignitaries holding their iconic “Charlie” signs, and the caption reads, “One family of clowns decimated, ten more take their place!”

Being a clown captures the paradox of what Charlie means at this moment, and points toward an understanding of how to think of the work that they (and others like them) do. To call oneself a clown is both a self-deprecating reminder not to be too serious, and an assuming of a very important role. And when aimed at those who take themselves too seriously, being portrayed as a clown lands as an insult, perhaps an unforgivable one.

As elsewhere in our culture, Jewish tradition judges being a clown in context. On the one hand, there are strong warnings against mockery, mean-spiritedness, and even just wasting time. On the other, one who uses humor to a holy purpose is lauded – even to the point of being singled out, in one Talmudic source, as particularly meriting a place in the world to come. A clown breaks through both melancholy and arrogance, cheering up the dejected while letting the air out of the haughty. And ultimately, according to the Sages, clowns bring peace. I’d guess that Charlie Hebdo wouldn’t be interested in the distinction for the sake of any such high-minded goal, however, their combination of sharp wit and coarse humor can provide that service.

The latest issue of the “irresponsible journal,” the first I’ve ever read in its entirety, isn’t particularly nice to Catholics, politicians, singers of La Marseillaise, nor Muslims. More accurately, it isn’t nice to those who are hurt when the values behind those identities are ridiculed. Other issues have mocked Jews, and some of my deepest-held values (I’m more of an “everything’s sacred” than a “nothing’s sacred” kind of person). However, in an environment when so many sacred bulls of every kind run amok, somebody must be allowed to brandish a shovel.

The power of expression is multifaceted and it comes with responsibility. Yet, paradoxically, one of the responsibilities of free expression is to carve space for both the frivolous and the offensive, in order to make sure that no voice is completely snuffed out under some consensus of what’s tasteful or acceptable. Charlie Hebdo manages to cross all those lines from an avowedly secular and skeptical perspective, and yet not be nihilist or without something to say.

Another strip in the new issue, also from Luz, opens a window into the psyche of how the Charlie Hebdo team were like mischievous kids drawing (sometimes obscenely) petit bohommes – little imaginary fellows to help themselves understand a vast and bizarre world of adults. The punchline is seeing how their imaginary “little fellows” have suddenly come to life in the millions of people marching out on the street.

Here, too, their final reflection refuses to fall under the spell of thinking too much of themselves: Mais jusqu’a quand? (“But for how long?”). In that question is, perhaps despite itself, a profound wisdom. In opposing what we know is wrong, and standing for values that we know are worthwhile, there’s always more that we don’t know. The best we can do sometimes is scribble our petit bonhommes in pencil and refuse to let them be erased.