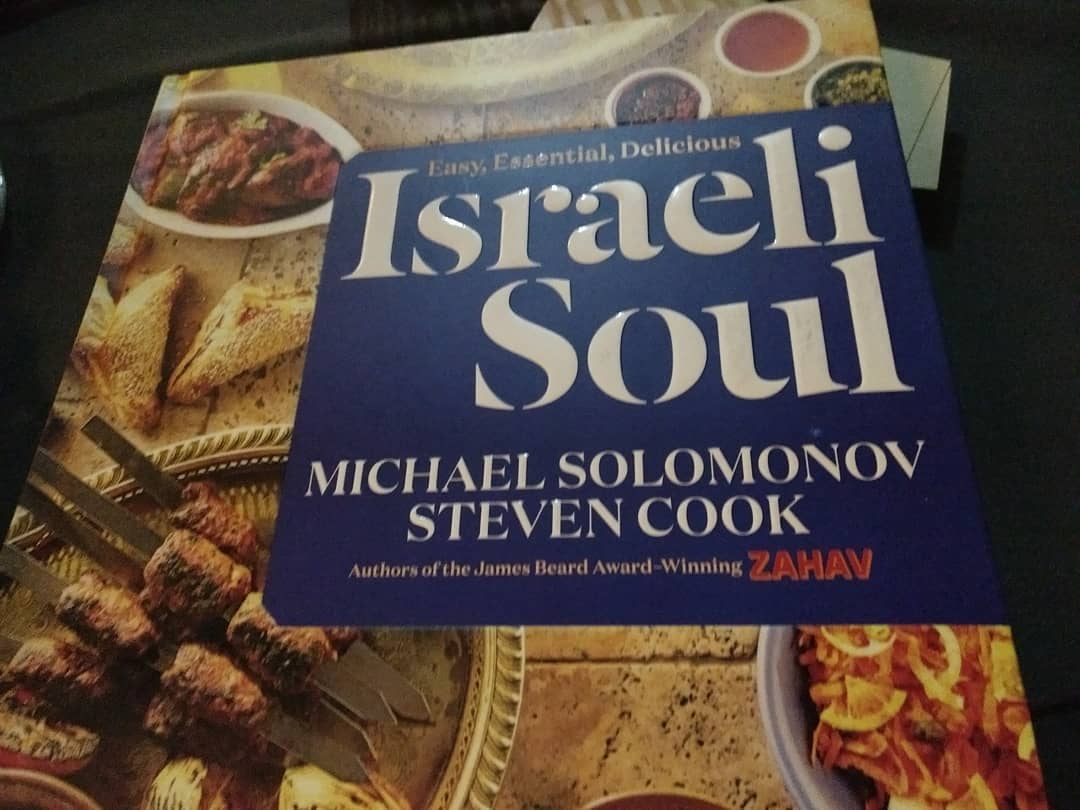 On Friday October 26, I was getting ready to leave for a three week writer’s residency in Minnesota. I had a long list of things I should accomplish first.  While I was preparing for my trip, I looked through the cookbook Israeli Soul, where I had gotten a recipe for pita bread that I made earlier in the week for my husband’s birthday.

Impulsively, I took the book to my office and became seduced by the photos and stories.  I spent so much time looking through the book, that I decided to write a review, ending with the thought that food communicates love in a family.

I’m glad that those were my last words written for publication before my life changed. Later that day, a shooter came to Tree of Life, where New Light, the synagogue my husband is the rabbi of, rents space.  We buried three friends and congregants and have been grieving with their families and the Pittsburgh community since then.

The cookbook itself is an expression of a vitality and vibrancy that is the essence of Jewish life, both in Israel and here. I am glad to be able to share these thoughts about food and comfort and diversity and co-existence and love.

There are different ways to measure the success of a cookbook.  Are the photos beautiful and the directions clear? Do you feel inspired to make your shopping list now and call up some friends to gather and test out your newest recipe acquisitions? Will you invite no one because you want to eat this dish all by yourself? Do you want to try a new technique or make something you’ve loved in restaurants, but did not think you could do at home?  Or, do you want to get on a plane and visit the country that has such paradisaical edibles in its midst?

Israeli Soul, the newest cookbook by the team of Michael Solomonov and Steven Cook is one that will make readers want to go to Israel as soon as possible. It has lush photos, not just of food, but of beaches and views and markets, as well as restaurants and the people who run them. Solomonov and Cook, who are behind the cookbook and restaurant Zahav in Philadelphia, and the 2016 movie In Search of Israeli Cuisine tell personal stories of the falafel joints they or their chefs loved as troubled teens, or of the Lod falafel spot beloved by Solomonov’s father and, reputedly, the locale where the plot to capture Adolf Eichmann was hatched.

Will I try every recipe here?  I have already been inspired to make my own pita and, as I write this, have a second batch rising.  It is not so hard to make, only a matter of timing in letting it rise, letting it rest, shaping it, letting it rise again and finally baking it. In this recipe and others, the authors position themselves as part cheerleader and part experienced guide to something delicious you will not regret spending time doing.

The five minute hummus recipe, too which can be found on the Amazon page for the book, is both tasty and easy to do.  It calls for canned chickpeas, tahini, lemon juice, cumin and garlic, all put together in a blender.  It does not call for cooking the chickpeas from scratch, as other recipes I have seen do, and it earned a high praise from my teen – “I didn’t know you made it.  I thought it was real hummus”(since obviously anything made must be inferior to what is bought in her estimation).

There are definitely other recipes with more complicated techniques that I won’t make any time soon.  I imagine Goldie’s French fries (which must be brined for an hour, steamed, frozen for 12 hours, and finally fried in hot oil) are delicious, but don’t see myself taking all those steps for potatoes.  Likewise, the borekas recipe, which takes a few pages of photos to illustrate. Though the authors say they have pared down the work from the three-day process they used in their Zahav cookbook, it still does not quite seem worth the labor involved.  And then, to have only 4 different fillings for the borekas, none of them – tomato, eggplant, Kale and Feta and Potato and Olive – seeming incredibly different or innovative – is surprising.  If I am to spend hours making this dough, I want to be sure the end product is amazing.

Some recipes I do want to try are a new technique for schnitzel (both chicken and zucchini) and the vegan tehini milkshakes served at their falafel place in Philadelphia, Goldie.  I might also try the cured fish, something that is delicious when others do, but that I have never tried myself, some of the Yemenite Shabbat breads like Jachnun or Kubaneh, or some of the grilled meats.  Though they are a lot of work I will probably try the rugelach at least once. Or so I tell myself.

But the reason to have this cookbook is not just for the recipes, but for a continuing culinary tour through Israel, the country and the people.  Solomonov and Cook showcase kiosks and restaurants that they and their advisors have selected as among the best in Israel at making falafel (which they do admit is impossible to choose, as most are excellent) or juices or Yemenite soup or butcher-to-table grilling.  The book doubles as a food travelogue, showing places to go for specific culinary experiences.

The authors also explain a bit about the origins of the people they write about, where their families are from and what they did or did not bring with them from Libya or Morocco or Bulgaria or Romania, gathering a sense of what Jewish food is beyond the standard Ashkenazi food most American Jews assume comprises the totality of the cuisine of the chosen people.  Since not all of Israel’s citizens are Jews, Cook and Solomonov highlight Druze bread, and recipes from the Arab sections of Akko and of Umm al-Fahm.

This is not a comprehensive cookbook like Joan Nathan’s massive compilation The Foods of Israel Today, but it is an attractive sampling of some of the main staples of Israeli food today, along with the innovations and variations that the trained chefs cook in their restaurants, based on what is served in Israel.  The photos of both the food and the country and people are stunning and colorful. The instructions and tools and materials, for the most part, seem geared to a competent home cook, though, depending on the recipe, one with varying amounts of time to cook.

The authors write in the introduction that their guide for which items to include was “recipes that help tell the story of Israel.”  They ask “what is the taste of home?” Perhaps that is one of the principle reasons for a cook to buy and use a book such as this, to make food that will nurture and delight those eating it, to bring members of the house and guests together over shared food. When food is made commercially, the goal is a profit, but at home, it is hopefully to let those sharing the table know they are loved. These recipes, from both home and restaurant cooks, are an expression of that soul and communication of love at the heart of a family.