So, Donald Trump, You’d Like Some Wisdom? Here It Is. 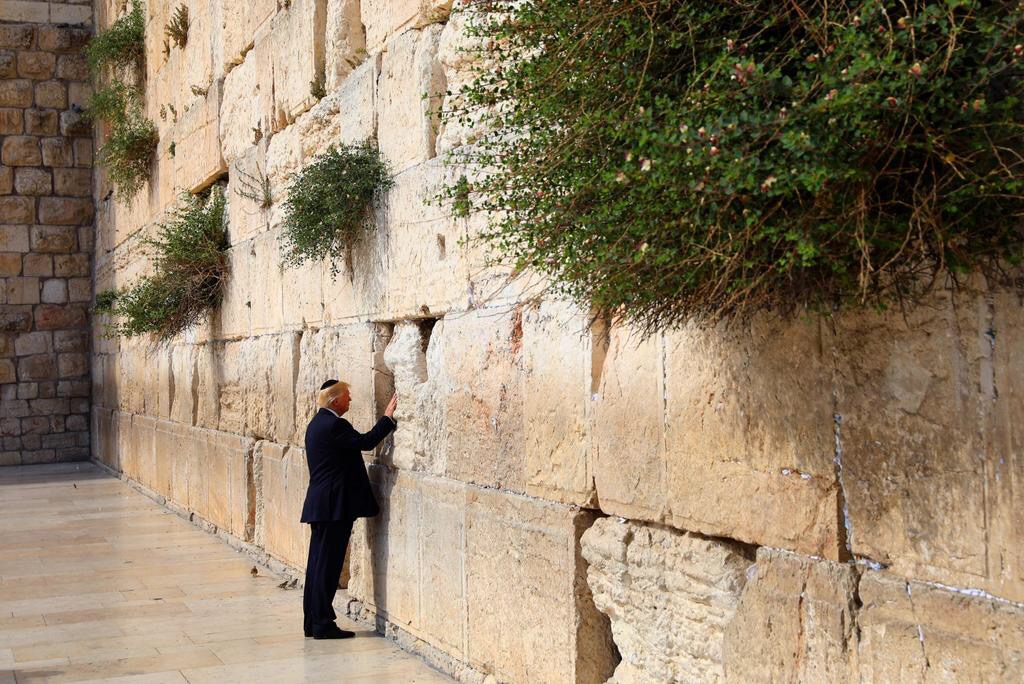 What does one do after visiting the Western Wall in Jerusalem? Well, if you’re President Donald Trump, you post a new image to your Twitter feed — an image of you standing in prayer at that wall, hand pressed piously against its surface, small black kippah, yarmulke, skullcap, whatever you call it, perched on your head.  That image was so moving, at least for some, that, according to New York Times reporter, Maggie Haberman, even people who are far from Trump supporters, told her that they found the image of the President standing at the Western Wall to be quite moving and genuinely powerful.

Now, before anyone goes getting all carried away and mushy about this, we should be clear, the image is now gone. It lasted less than 24 hours, which is fair. People change their images on Twitter all the time, I’m told, though I have never changed mine… but that’s a different conversation.

The image is now gone. What’s left, however, presumably, is the note that President Trump left at the Western Wall, following an old tradition that many people practice of writing down some thoughts, some hopes, some prayers, and leaving them on a small scrap of paper, effectively creating their own personal liturgy for their visit to what is considered to be one of the Jewish tradition’s most holy places.

That leaves me with a question, not about the image that Trump had on his Twitter feed, but about what was in that note he left in the Wall.  And I don’t mean that in the mocking, funny way that memes were generated all over the internet immediately following the President visit — things like, “Dear God, love your wall. Would love some advice because I’m planning on building one of my own,” and others like that, which, I admit, made me laugh.  But I also had a genuine curiosity. What is it that Donald Trump wrote in that note?

Sources close to the President are reporting that the substance of his prayer was a request to God for wisdom.  I want to assume, Mr. President, that you meant that sincerely and with a full heart, and I want to suggest to you that, from a Jewish perspective at least, the wisdom you seek from God may be closer at hand than you know.  There is an ancient Jewish tradition going back to the Mishnah, a text from the time of Jesus, in which the Sages asked, “Who is the wise person? What, in effect, does it mean to be wise?” And they give a very simple, straightforward answer.

“Who is wise? The one who learns from every human being.” I wonder, Mr. President, but to be fair I’m not only asking you, I’m asking myself and every single person listening to, or reading, these words –what would it really mean to embody, to live into, that model of wisdom?

What would it mean for you, arguably the most powerful person in the world, knowing how power often becomes an excuse for turning down the voice of others you don’t want to hear? Admitting that your own staff is on record saying that one of the ways to keep you, Mr. President, calm and most focused, is not to allow you to see the reflections, the responses, and the opinions of those who are your most serious detractors.

What would it mean, Mr. President, to live in light of two principles that flow from that definition of wisdom? Number one, that God never made any person so smart (with all due respect, even you, Mr. President), as to be 100% right about anything. Maybe even more importantly, Mr. President, God never made anyone so stupid as to be 100% wrong about anything. What would it mean to merge the power of the presidency of the United States with that ancient definition of the wisdom for which you prayed at the Western Wall?

The answer to your prayer, Mr. President, is within your grasp. I guess my only question is, do you really want it to come true? Do any of us? And what are we willing to do to make it so?