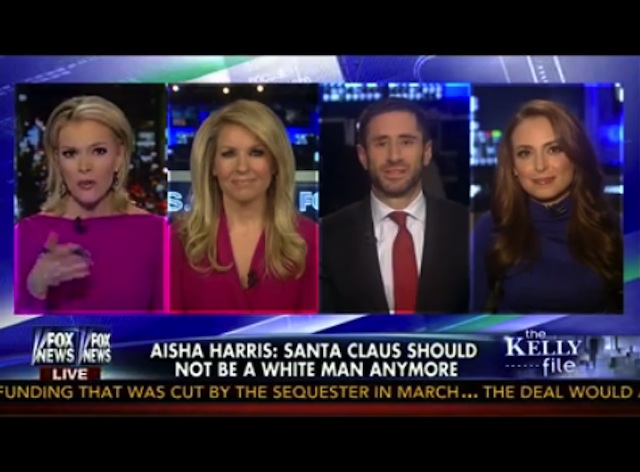 You can’t make this stuff up. [Last week,] FOX News’ Megyn Kelly reassured her viewers that Santa really is white. At first, at least, it sounds nuts. Where to begin? The claim that a mythic figure is “really” anything? Ms. Kelly’s need to reassure people that a much loved icon could be anything other than white? It really is hard to know where to begin. And then I wonder, if in addition to those serious questions about the sanity and ethics of Ms. Kelly’s assertions, something quite sane and more than a little important isn’t going on here.

Let’s start with the issue that brought on all this talk about Santa’s racial identity: Slate’s Aisha Harris’ piece, “Santa Claus Should Not Be a White Man Anymore.” It’s a well-intentioned piece that is ultimately as silly and misguided as Kelly’s response to it, maybe even more so.

Harris’ suggestion? Boot Santa Claus for “Penguin Claus.” That’s right; end whatever confusion exists about Santa’s racial identity by changing him from a man of any color, to a black and white bird! Sorry all you Asians, Native American Indians, or any other Santa-loving people who do not identify as either black or white. So much for genuine inclusivity.

In other words, by literalizing her understanding of Santa Claus, Harris falls into the same pitfalls which animate Kelly’s response. Once again we see that in culture war, as in all forms of combat, the combatants are typically far more alike than they often realize.

Both Harris and Kelly, by debating the appropriate racial presentation of the mythic Mr. Claus, stumble into the same errors which many people make when thinking about mythic characters and heroes in general. They fail to understand that when it comes to myth and heroes, the same figure can be real and contradictory at the same time. That’s the gift of myth.

Of course, some will cynically and mistakenly suggest that the real issue is getting over our desire for heroes. To them I say, God, or whoever, forbid.

Myth and heroes are fundamental to who we are as humans. Or perhaps, as one colleague argues to me, perhaps, like “god,” a persistent indulgence of our infantile need to imagine something bigger and better than ourselves, if only to avoid facing up to the cold harsh reality that it’s just us. But he’s wrong.

We need to stop fighting about the objects, human or otherwise, to which our need for heroes and the heroic are directed. That’s tired new-atheist rhetoric and even more tired Freudian analysis, both of which confuse the fact that it may be “just us,” with the fact that we too are bigger and better than we can possibly imagine. There is nothing cold or harsh about that, and it is demonstrably true that we are, or at least can be.

So if you like, simply imagine that we are the gods and/or heroes for whom we have been waiting, and build on that.

Our heroes are both real and imagined, black and white, etc. They are, especially when it comes to mythic heroes, whatever they must be in order to help us appreciate and live the truths of which they remind us. That’s difference between a myth and a falsehood, and it’s a distinction which can keep Santa alive and real, even if he is not factual, and whatever colors he “really” is and really is.