Redskins and Apaches Are Not the Same, Or How to Stop Undermining Ourselves 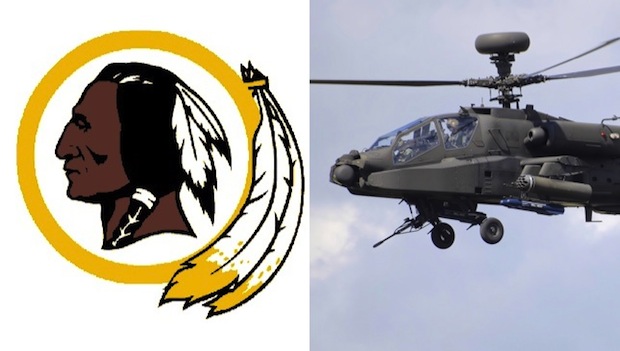 When I wrote last week about the dust up over the Washington Redskins’ name, I really thought it was a “one and done” kind of deal. I wrote about why I hope the name is changed – it’s at least potentially hurtful, and may be genuinely ugly. I also wrote about why legally compelling the team to do so, might be a sub-optimal solution because of free speech issues. I really thought that was it, at least until I read “The U.S. military’s ongoing slur of Native Americans” in the Washington Post.

The piece actually equates calling a team the “Redskins” – a term, as I previously pointed out, most of us would never direct at an individual Native American Indian – with the US military calling a helicopter an “Apache” – a designation most of us would happily use, at least assuming that the individual was a member of that community. The argument misses that distinction entirely and settles instead for a long historical diatribe – one which will almost certainly more deeply alienate many of the very people most opposed to changing the team’s name!

I appreciate the cultural sensitivity which I am sure motivates the author, but this is precisely the kind of extremist, reductio ad absurdum thinking which increasingly poisons our conversations about almost every cultural and political issue in contemporary life. And that is only the smaller issue here!

The larger issue – the one directly relevant to all of us, regardless of our views on this issue, and one which shapes even our personal lives, is how, even with the best of intentions, we often empower the very forces we oppose. How? By ignoring their animating concerns and anxieties and simply piling on increasingly burdensome demands.

I mean, what’s the point of the article after all – to open people’s minds and contribute to what the author would view as making a positive difference, or simply to sling sanctimonious arrows at his opposition? Does he want to be effective or simply trumpet his own sense of cultural and historical correctness?

And of course, this really isn’t about someone else’s article, it’s about us. When a conflict arises, we typically have a choice about what we want to privilege – the correctness of our position, or being heard by our opposition. There are definitely times for each path, but in my experience, short of physical struggle, the latter is almost always the wiser way to go.