Rapping the Evolution of Religion 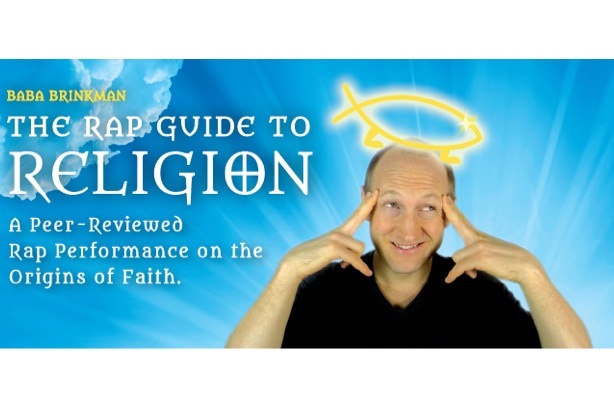 “You’ve probably never thought about the evolutionary origins of religion before. And if you have, you certainly haven’t heard it rapped before.”?That’s the message of of Baba Brinkman‘s hip-hop-inspired, meticulously-researched Off-Broadway show “The Rap Guide to Religion.” Brinkman calls his shows “peer-reviewed rap,” having created and performed productions like “The Rap Guide to Evolution” and “The Canterbury Tales Remixed.” His latest foray is into the field of religion.

Since I am always looking for interesting and intelligent perspectives on the interaction of science and religion, when a friend of mine told me about this project, I had to go see it. And I was deeply impressed.

Brinkman uses videos, slides, and (of course) rap to explain how and why religion evolved in human history. In fact, the first song is “Religion Evolves,” and that’s where he lays out his main point: religion does not come from God; it arises from a variety of human evolutionary adaptations, such as a need for explanations, a need to understand what others are thinking, and a need for community and connection.

There is a dynamic tension between science and religion, because science strives to be objective and impersonal, while religion is subjective and personal.

Throughout the show he expands on these ideas, skewering the celebrities who “thank God” for their success (if Matthew McConaughey thanked God for his Oscar win, did it mean that he asked God to defeat his enemies?) and using hip-hop artist Rick Ross as an example of our evolutionary drive for sex and prestige.

But for me, one of my favorite songs was his piece about his one-year-old daughter. When she was born, he wanted her to know about her ancestors, and so he went online and discovered that he was a fifth-generation descendant of Andy Murray, a Scottish Presbyterian minister. Murray now has over 8,000(!) descendants, but, as Brinkman says, only one of them is rapping about science.

That song goes to the crux of the challenge of the relationship between religion and science. There is a dynamic tension between science and religion, because science strives to be objective and impersonal, while religion is subjective and personal.

And that’s where I felt that there wasn’t quite enough balance in the show.

As he says, the show is designed to “leave audiences with a new appreciation of religion, and its critics.” The scientific study of religion certainly helps us understand it critically, and Brinkman is clearly a fierce advocate for science. He won a “Friend of Darwin” award, and one of the songs is the acceptance speech he gave (along with the challenges of being an atheist who wants to give thanks, but can’t think of a recipient). He cares deeply about making sure that his show is scientifically accurate, having corresponded with several of the scientists who inspired his show.

But I would have liked more personal stories, because it is only through hearing about people’s lived experiences that people will develop a deeper appreciation of religion.

Brinkman does share a few of his own struggles with religion: that he grew up thinking religion was ridiculous, and still feels like it can create a lot of problems in the this world, but now wonders what religion can be when it is at its best. So I’d be curious – what would “religion at its best” look like for him?

Brinkman is hoping to expand the show, so if he does, I hope he corresponds with not just scientists, but with religious leaders – and ordinary religious people – to learn about their stories, as well. How do his friends experience God? How do some religious people embrace science? Where do religious people see the future of religion?

Even without those stories, though, the show definitely made me laugh and it made me think. “The Rap Guide to Religion” is a very clever way to explore an ancient question, and one that both theists and atheists need to think about: how should religion evolve?

“The Rap Guide to Religion” is playing at the SoHo Playhouse through November 6, 2014. You can buy tickets here.