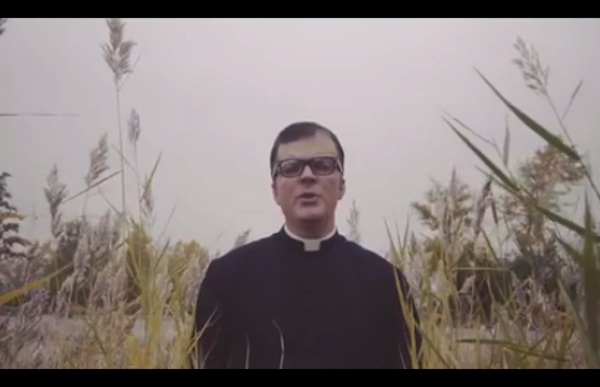 Fr. Claude Burns is a Catholic priest who raps under the name Fr. Pontifex, and just released a new album – The Symphony and The Static.? I actually love the idea of religious leaders bending their sense of calling and expanding their appreciation of where it can take them, and for that I give the good Father props.? But his concerns about the absence of God in people’s lives, and his claim to have the answer, actually reflect anything but a fresh and healthy take on faith and the human search for meaning.

Pontifex’s sense that life is better when we believe in something larger than ourselves is not only beautiful, but I think, true.? The importance of perseverance and the rich possibilities that await us all, even as we wrestle with the inevitable challenges which life throws at all of us?? Also powerful and beautiful stuff.

But his claims that “life is a battle”, that God is vanishing in America, and that Jesus is the answer, are respectively, not necessarily healthy, patently untrue, and possibly dangerous.

That life can be hard, I get.? That we all struggle, at least at times, is a given.? But is life really a battle?? And if it is, who is the enemy?? And even if it is, are we really at our best when we think of it as such?? Do we really need more war language, especially connected to religion, at a time when religion-inspired violence is so much a part of the contemporary human condition?

The idea that God is vanishing from America is simply not true.? Almost 90% of Americans believe in God or a higher power, and the number of Americans claiming to be atheists or agnostics has been pretty stable for the past 15 years.? God is NOT going away – at least not in the hearts and minds of contemporary Americans.

How we think of God is changing, our attachments to specific religious institutions like the Catholic Church are loosening, and the presumption that people will worship, congregate, study or celebrate as their parents did, is wrong.? But that just means that God as this one rap artist experiences God is under pressure.? That doesn’t mean that God is.

And with all due respect to Pontifex, whose music really intrigues me, to the Catholic tradition, which I deeply respect and admire, and to Jesus, who is clearly one of humankind’s most important teachers and from whom we can all learn a thing or two, claiming that Jesus is the answer, is the kind of thinking which turns religion from rich resource to potentially dangerous dogma.

Jesus is certainly an answer, but so is Moses, and so is Muhammad, and so is the Buddha, just to name a few.? Pontifex’s concern about what happens in human culture when it drives out faith is well placed, but so is the concern about confusing the importance of faith with claims about the exclusive truth of any one tradition.