The Beauty of Saying ‘I’m Sorry’ 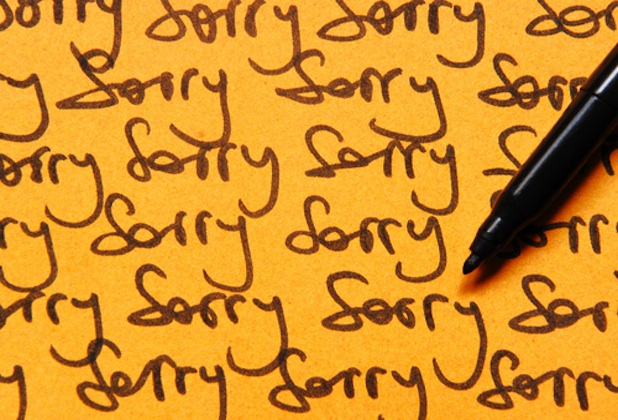 Recently, I wrote about the art of accepting compliments. On a related note, the whole question of when to say “I’m sorry,” and what those words mean, strikes very close to home with me. My guess is that it does the same for you.

We hear those two little words so often, and probably say them as often – but what do they mean? Are they an expression of passive regret about a particular circumstance, e.g., “I’m sorry that the coffee wound up on your shirt,” or under more serious circumstances, “that your loved one has died.” In those cases, the apology assumes no responsibility on the part of the one apologizing.

At times “I’m sorry” is a way of going beyond regret to actively seeking forgiveness, e.g., “I’m sorry I said those hurtful words” or “I’m sorry that I behaved boorishly.” And of course, sometimes it’s a mindless verbal placeholder, e.g., the “I’m sorry” uttered when we bump into something and say it without even looking up to realize that we bumped into a post, not a person!

Apologizing is not only something of which women and men should not be ashamed, it’s actually a source of goodwill and compassion.

Speaking of bumping into things: Men and women often use the words “I’m sorry” very differently, and as a married guy with three daughters, I bump up against that all of the time. Women, according to a number of studies, say “I’m sorry” far more often than men do (and reportedly mean something different than most guys do when we use those words).

Scientists theorize that women are comfortable apologizing more often because they may worry less about the projection of weakness or vulnerability, which supposedly come with offering the apology. In fact, some feminists have suggested that women should stop apologizing so much, as it is demeaning. That feels so misguided to me.

Happily, my view is supported by a great piece in Salon, written by Kylah Goodfellow Klinge, who argues that apologizing is not only something of which women and men should not be ashamed, it’s actually a self-reveling source of good will and compassion of which they should be proud. Amen!

Don’t get me wrong, there are times when I want the full-on mea culpa version of “I’m sorry.” That said, offering care and concern can never be a bad thing, and the notion that doing so either cheapens the words (or weakens the one offering them) is, I think, actually reveals a weakness in the one offering the critique – not the one apologizing.

Like many phrases, “I’m sorry” has many meanings. Narrowing the range of interpretations will not make any one of them more meaningful or valuable. In fact, I’m going to try and learn from my wife, my daughter and Kylah Goodfellow Klinge, and say “I’m sorry” more often – and proudly.