A Parent’s Exploration Into His Child’s Tech-Filled Life 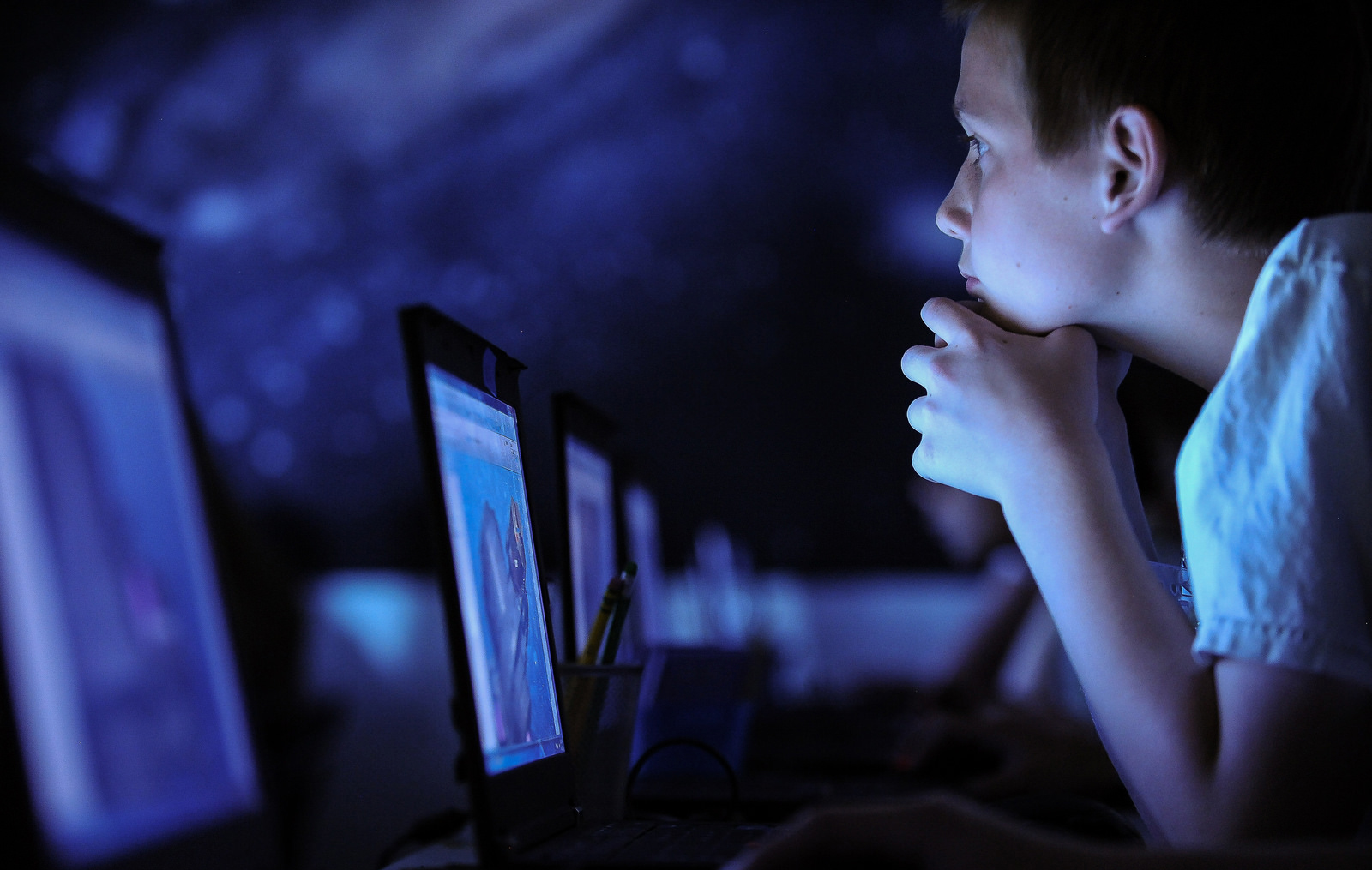 I am a father of an almost 15-year-old daughter and almost 13-year-old son. While both of my kids do well in school, are involved various extracurricular activities and volunteer their time at local social service agencies, my wife and I struggle with the fact that they both, like most of their peers, spend too much time on their cellphones. My daughter is obsessed with Snapchat, Instagram, YouTube, Musical.ly and various other sites that give her the ability to interact with people all over the world. Our son spends most of his phone time competing with his friends on Madden NFL – an online football video game.

Both of our kids know that they don’t have any online privacy as my wife and I monitor everything they do on the internet very closely. While we certainly worry about internet safety, our main concern is the amount of time they spend online. We worry that they and their peers do not have enough in person, face to face, meaningful social interaction.  Like many parents today, we are amazed that our kids can sit in the same room with their friends and they still communicate with each other via text messaging. It is not the way we did it as kids and, so, we worry about how this will impact their well-being and their ability to go out into the world and relate to other people in real time.

Recently, I had an experience that pushed me to examine my concerns about the negative impact that online time might be having on my kids. Last weekend, my synagogue began celebrating the upcoming Jewish holiday of Purim – a festive celebration that involves a lot of laughter and silliness. As part of the children and teen’s Purim celebration at the synagogue, internet sensation, Musical.ly celebrity and synagogue member, Baby Ariel came to perform with kids and create an online video.

The screaming that greeted Ariel was deafening – but once things calmed down and Ariel had a chance to interact with the kids, I watched as she engaged them in genuine conversations – not just about silly online videos, but about real life issues. One of the kids who spoke with Ariel just had major, cancer related surgery.  Ariel sat with him and the two of them talked about what he had been through. He opened up to her in an incredible way and she compassionately listened to him. While talking to Ariel’s parents, I learned that she has used her celebrity status to take a stand on bullying, a problem so many kids today wrestle with. Ariel’s popularity online has attracted a great deal of positive attention. At the same time, she has been harassed by many anonymous, online strangers. She addresses this openly on her website where she also promotes her anti-bullying campaign, Ariel’s Movement, that is working with the Pacer Center to bring about an end to bullying.

As I watched the kids interact with Ariel, it was clear that they felt extremely comfortable opening up to her. By following her online – they feel a real connection with her and she clearly feels a real connection with them. Sure, Ariel’s online status makes her a celebrity. Yes, some of the lyrics of the popular music she highlights in her videos might make old-fashioned parents like me somewhat uncomfortable. But, after spending time with her and lots of her fans, I saw very clearly that her compassion and huge heart make her a great role model – a good person for kids to follow online (with proper supervision, of course!).

Now, don’t get me wrong, my experience with Ariel did not eliminate my concerns about the amount of time my kids spend on the internet. It did, however, get me thinking that maybe, just maybe, time online does have perks that those of us who grew up with landlines and pagers do not fully understand.

Soon after spending time with Ariel, I read with great interest Holly Elmore’s story. Holly, a graduate student in evolutionary biology at Harvard University and an avid Facebook user, suffers from depression. She credits her ability to post and share positive aspects of her life, including her engagement and marriage, her acceptance into her PhD program and her research being featured on NPR, with her ability to rise above her depression.

“On Facebook,” she says, “I’ve found it helpful to behave on the outside the way I wish I felt on the inside.” She says that her psychologist labels her use of Facebook as a form of “affect management”. By using Facebook to highlight the good stuff in her life, Holly has developed coping skills that give her the ability to manage her depressive thoughts and behavior. On her darkest of days, Holly explains that Facebook has given her a way to share a bright, “acceptable appearance” – one that allows her to engage with the outside world.  Without Facebook, Holly writes: “I think I would have withdrawn socially even more than I did, which in turn would have made my depression even worse.”

Like my experience with Ariel, Holly’s story encouraged me to reflect upon the negative effects that I fear the internet might have on my kids’ ability to connect with others in a personal, meaningful way. Holly’s story did not push me to give up limiting the amount of time my kids spend online. However, it did open my eyes to a positive side of social media that I had never considered.

Online game programmer, Ryan Green, gave me some additional insight into the online world. In 2014, Ryan and his wife Amy lost their son Joel after a long battle with pediatric cancer. Ryan, with Amy’s help and the insight of the tech team at Numinous Games, worked to turn Joel’s journey into an online game that would get people thinking deeply about the challenges of terminal illness. Ryan explains that “people use games as a way to escape.” He asks, “what are we escaping from? Are we going to use our whole lives escaping from the things that make us us? They’re tragic and they’re beautiful.”

The game that Ryan and his team created, That Dragon Cancer, gives online users the ability not to escape from life, but to face some of the most difficult challenges that life can throw at us.  That Dragon Cancer allows users to experience the emotional turmoil that the Green’s lived through.  Users interact with online characters and make life and death decisions just like Ryan and Amy had to do with Joel. While some might find it strange that Ryan and Amy chose to create a game about their son’s illness and death, they do not look at That Dragon Cancer as a form of entertainment.

Rather, for them, the game is a tool that gives people the ability to virtually experience heartache that no one should have to experience in real life while sharing the transformative life lessons that they learned from Joel and his life. The reviews that That Dragon Cancer has received capture the fact that people are indeed transformed by the game. One reviewer stresses that:

That Dragon Cancer shows how video games can create empathy, both through the simple method of allowing the player to experience unfamiliar situations – and by twisting what is real and not-real within them. It’s cut through with human resilience and humour but ultimately defined by a determination to leave a mark on a little boy’s behalf – something to show he was here, and real, and mattered. An unforgettable experience.

The concept that a video game has the ability to create empathy and secure a child’s legacy undercuts my strongly held belief that online gaming can be a real waste of time.  Again, That Dragon Cancer has not kept me from attempting to limit my kids’ online time. This being said, the impact that the game is having on users shows that it is by no means a waste of time.

Just as Holly’s time on Facebook and Ariel and her fans’ time on Musical.ly, time spent playing That Dragon Cancer actually appears to benefit users, providing them with the ability to connect, learn and grow in ways that they might not be able to in the “real” world. Again, I am not suggesting that parents give their kids unlimited access to the internet. I am, however, coming to appreciate that this technologically complex world that many of us parents worry can harm our children might just have the potential to enrich their lives – and, maybe, the lives of us grown-ups as well.