The Nuns Of Silicon Valley 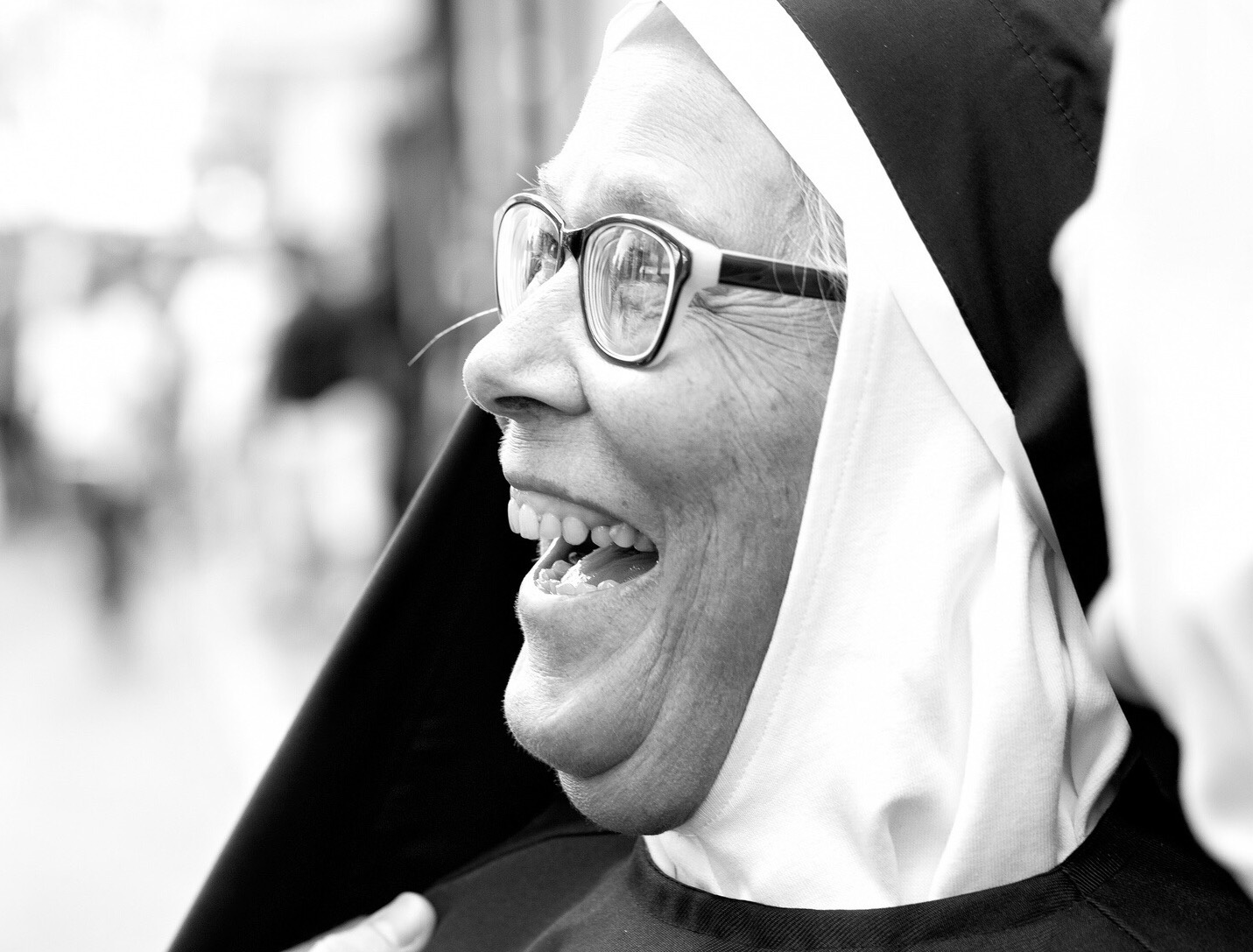 When I found out that there was a cloistered monastery in the heart of Silicon Valley, I knew that I had to visit. It was 2013 and, like a lot of people I knew, I was chronically over-worked, spending most everything I made, addicted to my iPhone and Facebook feed. As a reporter for a local daily newspaper, I was also deeply embroiled in local and global news in a way that felt impossible to unplug from. My life often felt like a treadmill that I couldn’t step off of.

I think that’s why the cloistered Dominican nuns, who live in a monastery and vow not to leave or participate in daily life as most people know it, caught my attention. What they were doing seemed radical. Having grown up Catholic, I get annoyed by the patriarchy of the Catholic Church and the way women are treated as less than men (they’re not able to conduct masses or become priests, for instance.) And yet, despite living within that church system, these women were challenging traditional narratives about the kind of lives women are expected to lead as wives and mothers.

The Catholic church has long been a place for women who, by preference, family decision or circumstance, didn’t get married and have kids. In centuries past, women and men were “committed” to the church by families as a way of garnering religious and spiritual favor. But in this age of expanded rights for women, I doubt that happens today in America. That meant that the women who live cloistered lives today actually chose it. And that’s remarkable.

I arrived at Corpus Christi Monastery on a cold spring day and knocked on the tall, heavy door. The building — with a connected chapel and tall spires — looked like something you’d find on a mountain in the Sound of Music, not a quiet residential street in Menlo Park, California.

A superior nun in a white cloak and a black habit opened the door and led me down a freezing hallway to an area that the nuns called the parlor (which still looked like a hallway.) It’s where, I would learn, the nuns sit and receive visitors. The weird part, to me, and probably any outsider, was that the two nuns I met, Sister Isabel and Sister Marie, couldn’t actually come out and sit with me. Instead, we shared tea on top of a wide wooden counter and spoke through the window above, framed by two metal gates.

My conversation with the nuns, somewhat hilariously, began with a discussion about the gates and the “enclosure.”

“Are you guys on that side because you have to be? Or can you come out? … You can come out, right?” I asked.

“No,” Sister Marie, told me. “This is what we call the enclosure.”

“Oh! Ok! So this is like… the area,” I said, looking around and silently freaking out for a moment at the thought of never leaving your home.

The enclosure at Corpus Christi is nine acres, including gardens.

“Because there are many sisters here, and sometimes you just have to get away,” Sister Marie told me in an exasperated voice, probably recalling a time that necessitated escape from her fellow sisters. It’s an essential part of the sisters’ vow to live apart from other people and focus on God. They occasionally venture out into the world, but rarely, and only for the necessities like buying a new pair of all-black sneakers.

The nuns spend most of their day in silence, they told me, including at meals, where they often eat stale bread and discount food they’re given. Some of the sisters cook better than others, but the jobs rotate, so meals are a bit of a gamble. The rare exception happens when one of the nuns has a birthday and is allowed to choose a special meal and have conversation with her fellow sisters at dinner.

The breakdown of the sisters’ day goes something like this. I took the info from the Corpus Christi website and tried to translate some of the old terms into modern English.

Sister Isabel, a sweet, bubbly woman with a ready laugh and young, bright eyes told me that she’s sometimes felt uncomfortable with the fact that she and the other nuns confine their lives to the monastery instead of going out into the world to help people.

“Sometimes I was thinking to myself, ‘I don’t do anything!'” she laughed. “‘I don’t produce anything.’ But I realized that we do, it’s just in a different way.”

Sister Marie, a thoughtful, kind woman who had a high-paying corporate job before she entered the order, told me something similar. Before she joined, she said, she had felt paralyzed by all of the good work she wanted to do in the world, all the places she wanted to volunteer, all the people she wants to help. She felt like she could never help enough — and the idea was paralyzing. But after she entered the monastery, she said, she began feeling even more connected to the suffering in the world, and the good in it, too. By praying for people who she’ll never meet each day, she said, she believes she can do more good than if she went out into the world and helped people individually.

“When I began this life, it was clear to me that in a contemplative life you embrace the whole world, you pray for the whole world even though you don’t go out,” Marie said.

For these women who live behind gates and doors, renouncing the world wasn’t a prison sentence, it was a gateway to some kind of other freedom. Of course, not many people pursue freedom this way.

When I visited, there were 10 Dominican nuns living at Corpus Christi and one more woman, named Tara, apprenticing to join once she paid off her student loans (a common road block, apparently.) The numbers of nuns there used to be higher — as many as 40 lived at the monastery in the 1950s and 60s. Then and now, the monastery helped support itself by baking communion wafers for mass.

But in the years after WWII, the Catholic Church saw a decrease in the numbers of people who decided to become either priests or nuns — and the numbers of nuns have dropped far more dramatically.

As I looked into the relationship between the Catholic Church and the orders (groups) of nuns, I found, to my delight, that the Catholic Church is a little bit wary of nuns in general (including those who do not live in seclusion like the Dominican sisters do.)

I found record of this in a 2012 Vatican document that talks about a leadership group that represents 80% of American nuns.

According to the document, the Vatican is uncomfortable with “radical feminism” within the group. “The cardinal noted a prevalence of certain radical feminist themes incompatible with the Catholic faith in some of the programs and presentations” the document reads, “(and) some commentaries on ‘patriarchy’ distort the way in which Jesus has structured sacramental life in the Church …. even undermine the revealed doctrines of the Holy Trinity…”

Moreover, the document said, the nun’s organization sometimes goes against the church’s teachings on homosexuality and the idea of women priests and thus “suggest that these sisters collectively take a position not in agreement with the Church’s teaching on human sexuality.”

I have to admit that I squealed when I read that Vatican document — a rare occurrence, to be sure. It made me happy to think of nuns across America, resisting together. They clearly have to possess a deep respect for tradition to dedicate their lives to the church. But I’m glad they honor themselves by expressing beliefs in equality — beliefs that mirror the reality of living with their fellow sisters.

It makes me happy that, even though these nuns gave up their lives, they still retain an essential part of their own selves, a part that’s willing to speak their mind and their conscience, even when it’s unpopular with the higher-ups.

Isabel and Marie told me a little bit about what they each gave up when I sat with them. Good coffee was mentioned several times. They now drink instant, black.

“I used to go to Starbucks every morning!” Sister Isabel told me, laughing. “And I never ate oatmeal before, either. It’s like baby-food.”

The women also gave up their property, cars and apartments.

“I arrived with nothing when I came here,” sister Marie told me.

But aside from their possessions and luxuries, the women also had to give up something larger: their ability to have normal relationships with people outside the convent.

Family members can only visit a few times a year, and when they do, they have to sit with the nuns in the same separated way that I did. Sister Isabel’s mother, a devout Buddhist, hasn’t even spoken to her in the four years since she entered the monastery. Sister Marie’s mother wasn’t very happy, either.

“When I told her I was joining, she said, ‘Couldn’t you wait until I die?’ she told me.

And her mother wasn’t the only one Marie left behind. Right as she was preparing to enter the monastery, she met a man and they began to fall in love.

“It was the first time in my life that I really lost sleep,” she told me. And yet, being out there in the normal world, she felt this emptiness that never seemed to go away.

So Marie decided to give everything up and enter the convent in the hope of understanding and filling that emptiness. The man who she loved became her friend, and they’re still friends today.

“God is very funny, you know, he has a sense of humor,” Marie told me.