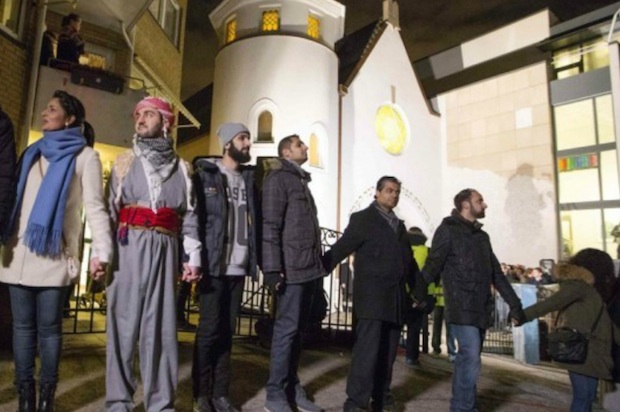 What does it mean to build a holy place around us? In Oslo, Norway, the true power of building a holy place together was on display this weekend as hundreds of Muslims responded to a call to surround the central synagogue with what organizers dubbed a “Peace Ring.”

The Peace Ring was a symbolic act, to show that these Muslims and the many volunteers who participated with them are committed to protect their sisters and brothers who are Jews, and to do so in the name of Islam, the faith that inspires them and to which they devote themselves (organizers were reportedly inspired after a Copenhagen synagogue was attacked earlier this month).

We reach an even more profound openness to God’s presence when those inspired by other faiths and beliefs are counted as our neighbors.

In forming this ring of human beings interlocking hands around the synagogue, I can only think of the way Jewish mystics read into the fact that the Hebrew words for the sockets and bars that held together the sacred Tabernacle (the Tent of Meeting, described in the Biblical book of Exodus) resembled the words for “blessing” and one of God’s names. The key act of a blessing was making the connection, just as those objects made firm the structure of the holy sanctuary.

As these Muslims formed their ring of peace in Oslo, they’ve also opened a new dimension of this mystical Jewish teaching. Their powerful action showed that what makes this holy synagogue surrounded by blessings and the Divine presence aren’t only materials drawn from the Jewish community. Rather, we reach an even more profound openness to God’s presence and blessing when those inspired by and practicing other faiths and beliefs are counted as our neighbors, and become part of the holy assembly.