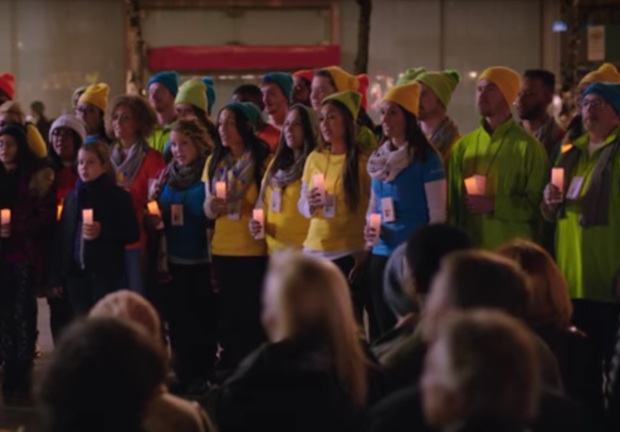 Can one really celebrate Christmas, or any other religious holiday for that matter, without at least some acknowledgment of God? Well, that depends on what you mean by “really”, but my answer to that question is, “Of course you can!” Just ask the tens of millions of Americans who do so, not to mention the folks at Microsoft, which released a new Christmas ad designed to do just that — and it does it with genuine beauty to boot!

The ad is causing some real consternation, probably because it is genuinely beautiful and “Christmasy” even though it skips over God. It features members of the New York City Choir and Microsoft employees from across the country singing the well-known holiday hymn, Let There Be Peace On Earth — rather humorously — to employees of a nearby Apple store.

Missing from their performance, are the lyrics: “With God as our Father, brothers all are we, Let me walk with my brother in perfect harmony.” Cue the outrage from the culture warriors always on the lookout for skirmishes in the “war on Christmas” and the “battle to drive God from American public culture”.

I want to be clear, by the way, I believe in God. My belief adds meaning and purpose to my life, and I believe that it can do so for lots of other people as well — including those who do not currently believe in God. That said, it would be crazy to miss the meaning, purpose, power and beauty found in religious holidays and observances by the increasing number of people who range from agnostic to atheist to those simply not willing to be defined by any of these religious categories.

We are not talking, to be clear, about some fringe group here. We are talking about as many as 30% of Americans. These people are living proof that one can “get over God” and still celebrate the holidays quite nicely.

There are certainly differences when one celebrates with God in the picture and when one does not. I get that. But what too many people led by the “war on Christmas” crowd are missing is that there are also profound similarities regardless of one’s position on God. Often times celebrating those similarities sadly and even dangerously washes out any of the rich particularity of the tradition leading the celebration. That is not the case in this ad, though.

In fact, I think this ad has gotten people riled up precisely because it refuses to be part of any supposed war on Christmas. It actually celebrates the holiday, and at least some of its most cherished values and messages, in a way that can be maximally shared across borders and boundaries without giving up the overt celebration of Christmas itself. The folks at Microsoft are to be congratulated for that, not castigated for it, and I wish them a very Merry Christmas.