When Life Gives You Lemons, Throw a Party 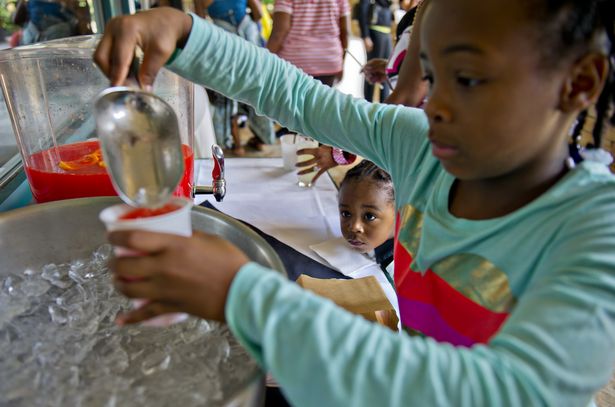 What would you do if forty days before your daughter’s wedding it gets called off?? In your disappointment, would you stew in sadness, would you cancel everything, try to get your money back?

You don’t if you’re William and Carol Fowler. When their daughter Tamara’s wedding was canceled, the Fowlers called Hosea Feed the Hungry, a nonprofit organization that provides homeless individuals with services and resources, and invited 200 homeless people to what they called “The Fowler Celebration of Love.” William said he “prayed on it during the night and God had directed him.”? The Fowlers greeted all of their guests and were very involved in the whole event Tamara, who volunteered at Hosea when she was younger, even attended too. I love how Carol Fowler referred to her family: “We’re regular, working people and anybody can do this. This is not star stuff.”

I don’t know the Fowlers personally, but I do know that the resilience they possess to transform personal sadness into collective joy, the perspective they have to reframe loss and see opportunity to help others are qualities we can cultivate. Their story is a pretty good prescription.

When we are overwhelmed by a situation we should take a step back – “pray on it” as William Fowler did – and reflect. The truth is we can’t do anything about our past.? What happened to the Fowlers, what happens to us, is often very unfair – a disappointment, a betrayal, a failure, a hurt – but the past does not determine the future. As one of my teachers, Reb Zalman Schachter? teaches, you can’t drive looking through the rear view mirror. We have small rear view mirrors and very large front windshields because what happens in the past is not nearly as important as what happens in the future: where we are going is more significant than where we have been.

Like the Fowlers, staying around supportive people who care about us often helps us focus on the good things in our life. It is easy and even understandable to carry around regrets, anger, and disappointment and I am not saying we need to simply forget or just shake off the deep hurts we suffer. But life is too short to live in the hurt and if we allow the past to poison our future we can’t move forward. The Fowler’s didn’t focus on the hurt. What was done was done and that they couldn’t change the past. They chose to let go of the hurt and to move forward believing the future would be better than the past.

The insight that as one door closes another opens is not a sweet Hallmark card but a call to action, a practice that takes serious discipline. And here is the wisdom: The Fowlers did not wait for God to make it up, they moved forward through their own actions. It wasn’t a leap of faith into a god that would make all things better or a leap of faith that our attitude changes reality. Rather they took a leap of action and their actions changed their feelings.

The Fowler’s understood the wisdom at the heart of a flourishing life: Helping others is the key to weathering the inevitable storms of life.

In the language of the great wisdom traditions: Sow our losses as seeds and we will wind up with a harvest. The Fowler’s sowed a seed with their loss and look at the harvest they reaped.

One relationship may have died but their trust in relationships did not. They saw opportunity, they saw possibility and their future started with a celebration.

Oh, and the Fowlers plan to hold a similar event next year!