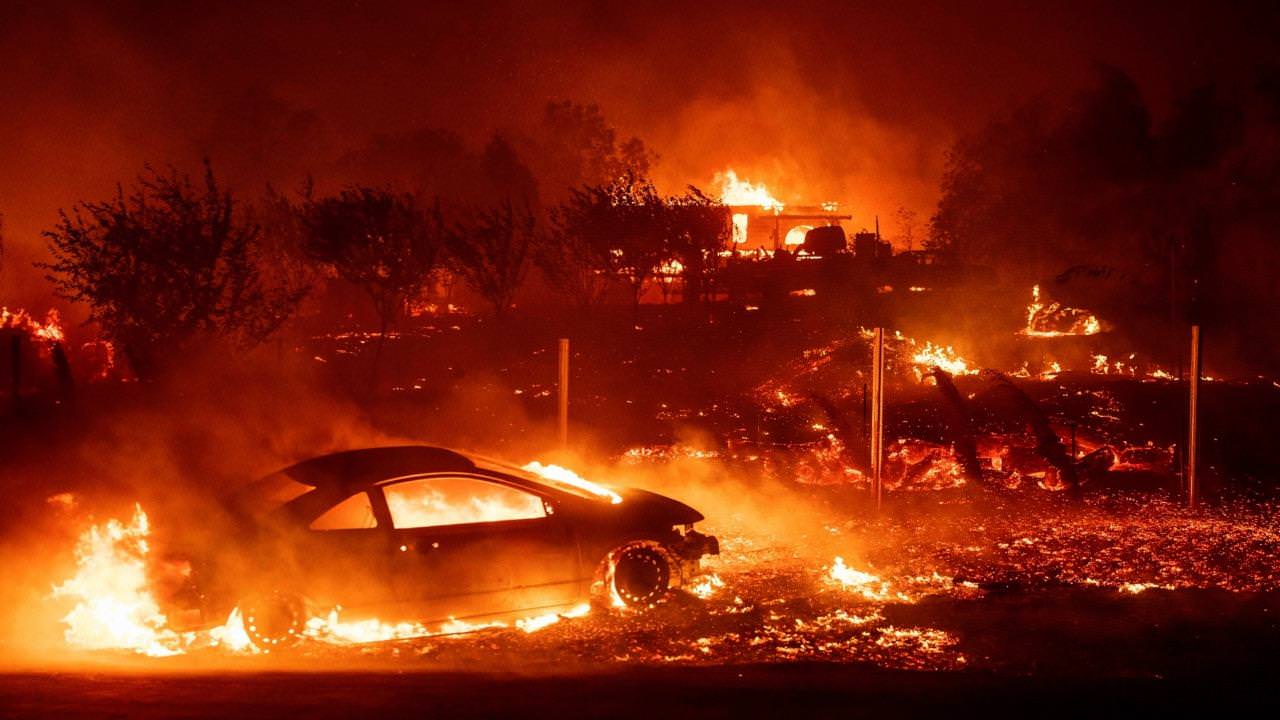 On November 8, 2018, I awoke to a strangely black plume of smoke above my house in Chico, California. I snapped a photo of the odd, pumpkin-like sun that glowed orange through the smoke. Within a few hours, the town of Paradise, California, ten miles southeast and up the hill from us, would completely burn to the ground.  The unprecedented, catastrophic Camp Fire burned over 13,000 homes and displaced 50,000 people in a single day. Our low-key, peaceful rural county was wracked by chaos, collective sadness, and the thick smoke of an incinerated city. In the midst of the disorientation of such a dramatic event, profound truths emerged like beacons of light through the smoke.

1.There is Boundless Good in Humans.

As soon as word got out that Paradise was on fire, people rushed in to help, and have not stopped. Immediately, the people of Chico, Oroville, and surrounding communities held out their hands and opened their hearts, creating a net to catch, or at least soften, the fall for the thousands who were displaced. Personal homes and shelters were opened, food was made and served, animals were rescued, secured, and cared for, medical care, acupuncture and massage were given, and donations were given, sorted, and distributed in massive quantities. An infinite stream of Gofund Me accounts were opened and filled, the elderly were connected and sent to long-lost relatives, hotel rooms were paid for, gas cards were given away, and an adopt-a-Paradise Family website was created.

At the refugee encampment in the WalMart parking lot, a parade of Taco Trucks and citizen volunteers constantly came through, feeding and assisting those that had lost everything. World Central Kitchen, a disaster relief team of chefs, set up a kitchen that’s still serving thousands of delicious meals a day, with the help of a continuous army of local volunteers. On Thanksgiving, 7,000 pounds of turkey were smoked by Guy Fieri, and free meals were made for 15,000.

In a myriad of small and large ways, people pitched in. No one knows how to solve our problem of so many thousands now needing housing, schools, and jobs where there are none, but we will not stop helping until it’s done.  This outpouring of compassion has affirmed something I had hoped was true – the goodness in our human hearts shines even in dark times.

2.We Are On the Same Boat

The words to a song I sang at my childhood Jewish summer camp have been going through my head since the fire.

Paradise, with its off-the-beaten track, tucked-in-the-woods location, attracted a uniquely full- spectrum population of people. There was a large demographic of Mormons as well as Seventh Day Adventists. There were back-to-the land hippies, artists, musicians, and marijuana growers. There were wealthy doctors whose mansions had soaring canyon views, and young families struggling to make payments on their manufactured homes. There were devout churchgoers and dedicated methamphetamine smokers.

These various segments of Paradise society may have had little interaction during pre-fire life “on the ridge”. But when things heated up – it didn’t matter who voted for Trump, who screamed for joy at the Bernie Sanders Chico rally, and who was too suspicious of government to register to vote – everyone was in the same boat. In our humanity, and in our basic needs for safety and survival, there are no differences.

In our need for security, home, and hearth we are the same: The extended family that has been in Paradise for generations, and lost five homes filled with collected antiques and heritage art. The couple with young children, who just bought their first home a year ago, and were pouring their hopes for their children into it. The fellow who spent 15 years working on his dream home, which was about to pass code and become insurable. The elderly disabled living on social security in a run-down cabin or mobile home park. Loss and sorrow has crossed all boundaries, everyone is in this mess together.  Divisions have naturally been set aside, and the entire community is working together to keep our fragile bloat afloat.

3. Climate Change is Here, and It is Coming to An Ecosystem Near You

I considered Northern California a safe haven during the perilous times of increasingly dangerous and unusual weather events. Here in Butte County, we were safe from hurricanes, tornadoes, and blizzards. In the temperate inland California hills, far from rising seas and unpredictable storms, what could possibly go wrong? My friend Mike, whose young family lost everything in the fire, said “Let Paradise be an offering to the world on the altar of Climate Change.”

The truth of a changing climate is stark – it has arrived. The strength and ferocity of recent wildfires are historically unprecedented. Paradise, California had been a forest settlement since the 1850s, when gold was found in the Feather River Canyon, and nothing like this has ever happened.  The rains had always come in late October, wetting the forests down and preventing such catastrophe. In the past few years, the weather has gotten dryer and dryer, and now California is burning, sending a smoke signal to the world to please, pay attention and starting addressing climate change. It will take creativity, courage, and cooperation, but it is not yet impossible. See Lesson # 2, We Are On The Same Boat.

4. The Truth of Impermanence

The Buddha taught the truth of impermanence. The concept of material things lasting, having solidity, is an illusion, he said. The night of November 8, after the fire raged through Paradise, it came roaring down the hill towards South Chico, where I live. Evacuations were ordered for neighborhoods next to mine. I needed to pack my “go-boxes” for evacuation, and I could not think of a thing to pack. After a day of raw, terrifying reports from Paradise and Concow, of loved ones escaping on roads surrounded by walls of flame, I could not think of a thing.

I stared at the bin I brought in from the yard, yawning black and empty, and drew a complete blank on what to place in it. All that mattered was people and their pets. Eventually I threw in old photo albums and journals, papers and passports and a favorite quilt. I couldn’t find the homeowners insurance policy for the house we owned in Paradise, a rental property which had surely burned down, so I grabbed last year’s, praying I had actually remembered to pay the premium (turns out I did).  There.

I stared at that bin, twenty beautiful years of living and raising a family in Paradise and Chico, distilled into one storage Tupperware. And it hit me then, that evacuating from a fire is one kind of transition, and is actually  a practice for another transition that will also someday come for me, and everyone: Death. You don’t get to bring along a single Tupperware,  let alone a carload, when that times comes.

Here in Butte County, we are still in shock and disbelief that Paradise disappeared in a day. A city of 30,000 people disappeared in a day. It is staggering, still unreal, a cause of disequilibrium and a readjustment of what we have taken as real.  Since the fire, I have had wild flashes of existential disorientation. Our house we lost in Paradise was a rental, and we were not living there, but it was our nest egg, our retirement plan, an anchor for my sense of security. We may not have a retirement account but we’ve got the Paradise house Whoosh, gone. More importantly, the city we loved, the street where our kids learned to ride bikes, countless friends’ homes, the best hospital in the area – whoosh, gone.

In those moments of dizziness and fear, giant cracks in my version of reality have opened, and a bright light of not knowing has penetrated through. I don’t know what is real anymore, but I am open to discovering it. I see the truth of impermanence and I am ready to wipe the tattered shreds of illusion away, like cobwebs off a window, and glimpse at a deeper truth.

To donate to relief efforts, please go to the North Valley Community Foundation.

Dena Moes is a Hollywood born, Yale educated midwife in Chico California. She is the author of The Buddha Sat Right Here: A Family Odyssey Through India and Nepal- a memoir about adventure, spiritual inquiry, motherhood, and love. It will be released April 2, 2019. Visit denamoes.com for more.