The Man Who Asked The Last Question Won The Debate 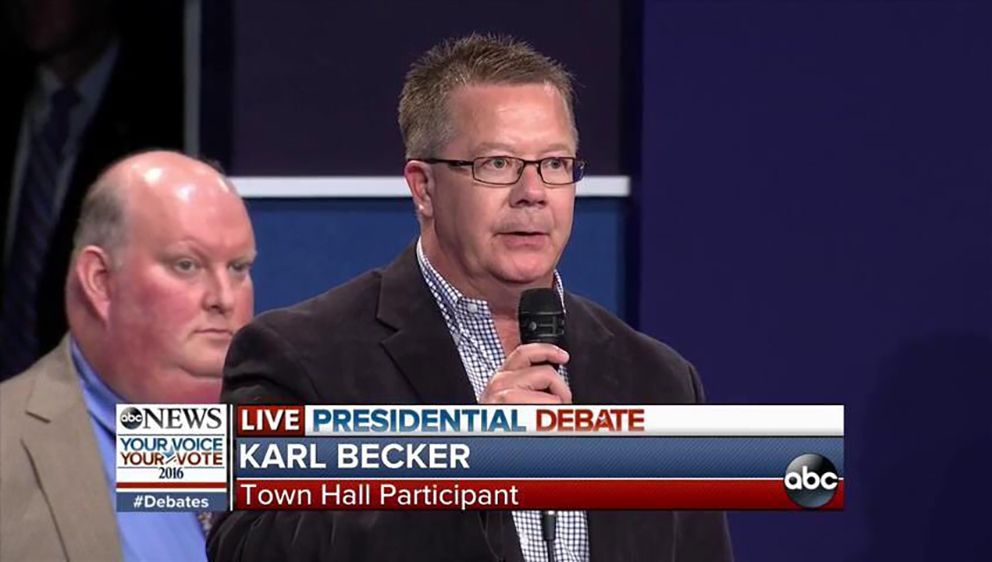 Wait, wasn’t the debate between Donald Trump and Hillary Clinton?  It was.  So what was the last question, and how did the person who asked it win the debate, you ask?

Karl Becker is the uncommitted voter who took the mic for the final question of last night’s presidential debate and asked the question which seemed to have the greatest impact of the evening: impact on both the candidates and on the audience.

The question he asked: “Would either of you name one positive thing that you respect in one another?”

With that simple question, a bitter, tedious evening turned toward something genuinely constructive and impactful.  Even sitting at home, I felt the energy in the audience change from a mixture of bored exhaustion mixed with cage match fury, to one of surprise, interest and hope.  You tell me which set of emotions is more likely to lead our nation to a better place, however you define that better place?

And it wasn’t only the audience that shifted, it was the candidates themselves.  After proving nothing to the country other than the fact that each was capable of doubling down on all of the traits for which they are already best known, and adding no new ideas to any of those which each is already pedaling, both Trump and Hillary were actually caught up short, and pushed toward a more positive place than either of them spends much time.  And to their credit, each of them went there.

Hillary spoke positively about Trump’s children, and while not a directly positive comment about him, she gave her opponent at least some serious measure of credit for the people his kids have become.  That was big, especially in light of the past week’s revelations.  Trump spoke admiringly about Hillary being a fighter — “she doesn’t quit, she doesn’t give up.  Given the pride he takes in his own pugnacious nature, that we a serious compliment.

After 90 minutes spent mostly in pointless brawling, if not the gutter — where they went as well, it only took a moment to turn things around, and have the debate end with the handshake and the decency that pointedly missing from its beginning.  In 10 seconds, Karl Becker turned the whole debate around with 14 words.  He brought out the best in two people and restored a bit of health and dignity where both had been lacking.  That makes him, in my book at least, the winner of last night’s debate and also someone who I will now count among our teachers.

Mr. Becker reminded us of the positive power of genuine curiosity about others.  His was the truest wild card question of the evening, the one to which both he, and the rest of us, were least likely to anticipate the answer.  Those are often the most important questions to ask, not simply of candidates on stage, but in life.

Karl Becker also reminded us that leaving space for something positive in interactions even with our opponents, not only improves the quality of our disputes, but it brings out the best in us.  He reminded us of perhaps the key insight behind the entire school of positive psychology — an insight backed up by more than a generation of serious research i.e. Working from the awareness of strengths and virtues, rather than weaknesses and pathologies, is quite often the most efficient path to achieving our goals in life.

I know that each of these candidates remains who they are, and their responses did not change my mind about which one I support and why I do so.  I doubt it was much different for many people in the country, and the “snap polling” conducted immediately following the debate, confirms that.  In that sense, the debate was a draw.  But in a nation hungry for more than a choice between what most seem to think of as the more tolerable between two undesirable choices, Karl Becker showed us how to make the best of the candidate we have, how to look for ones about whom we feel more positive in the future, and most importantly, how to reset moments of conflict so that we are more likely to get what we want throughout our lives.  Thank you Karl Becker for winning last nights Presidential debate.