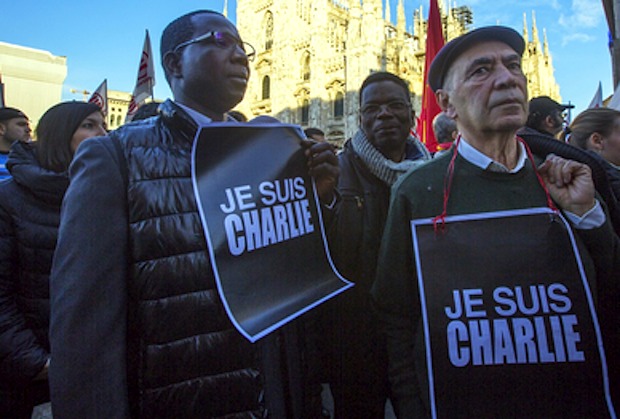 The rallying cry Je Suis Charlie (“I am Charlie”), referring to the French magazine Charlie Hebdo, where 11 journalists were murdered in the name of Islam last week, has become popular on placards, posters, t-shirts and more – not only in Europe, but here in the U.S., where pro athletes recently sported the slogan on their pregame workout clothes.

But what does it mean to identify yourself with Charlie Hebdo, a publication which for years has specialized in being not only purposefully provocative, but blatantly offensive – and not only to Muslims, as if that weren’t bad enough?

Some writers, such as The Daily Beast‘s Arthur Chu and New York Times’ David Brooks, are asserting that while it should go without saying that nobody deserves to die because of words or images they create or publish, they want to be clear: They’re most certainly not Charlie. Each, in his own way, differentiates himself from the consistently foolish, sometimes grotesque antics that represent Charlie Hebdo. I get that. I even appreciate their point; namely, that freedom of expression does not justify self-aggrandizing mockery of other people and their ways of life.

What I don’t get, and in fact, totally reject, is their rush to distance themselves from the victims at a moment of such horrible hurt and sorrow. Even if their analysis of Charlie Hebdo is correct, and much of it is, that really doesn’t matter right now. There will be time for all of that later.

You don’t need to agree with any of the content produced at ‘Charlie Hebdo’ to say: Je suis Charlie.

All that matters now is the bright line that must exist between those who murder in the name of what they believe, and those who don’t. There is nothing nuanced about that distinction, nor should there be. As important as nuanced thinking, cultural sensitivity and social responsibility are for all people who put their ideas into the public square, now is not the time to make that point, and it’s hard not to wonder if those who do so are not themselves being a bit purposefully provocative — and dangerously so.

You don’t need to be Jewish to proudly proclaim, Je suis Juif (“I am a Jew”), or a police officer to declare, Je suis Ahmed (“I am Ahmed”). You simply need to identify with the humanity of those who were slaughtered at the Paris kosher market Hyper Cacher, or with the Muslim police officer who was assassinated in the line of duty outside Charlie Hebdo‘s offices.

You don’t need to agree with all, or even any, of the content produced at Charlie Hebdo to say: Je suis Charlie. You simply need to know where, and with whom, you stand when it comes to terrorism and murder.

So with all the criticism that could be lobbied at the magazine, at some point in the future, in these days and weeks we’re in now, I’m proud to say Je suis Charlie. I hope that you are, too.