Is Football the New Tobacco? 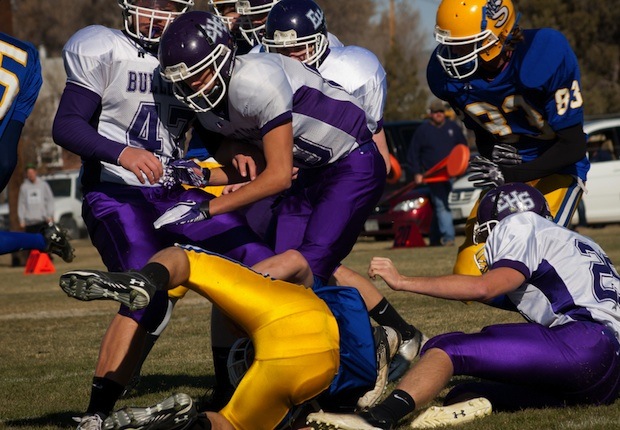 Could football really be the new tobacco, as suggested by the cover of the NY Times Magazine and to be fair, by The Dish’s Andrew Sullivan 2.5 years ago?? Before you go calling me some nanny state, un-American alarmist just looking for one more legitimate pleasure that people should be free to enjoy, watch this video which details the brain damage sustained by high school football players.

Even if it’s only one study, it makes you wonder, doesn’t it? Should we really be celebrating a game that almost by definition is harming those who play it? At the very least, should we not treat minors and adults differently when it comes to playing the game?

These are just a few of the questions we need to be asking in the face of the mounting evidence regarding the long-term brain damage suffered by so many football players, let alone football-related deaths occurring as young as high school. They are not, however, rhetorical questions.

The answers to these questions are not obvious, especially when we fail to acknowledge the many positive aspects to football, the opportunities which it creates, and the fact that many things kids do everyday are much more likely to result in injury or death (e.g. driving a car.)

I should admit that I am a football fan, and like tens of millions across our nation, I am spending part of my Sunday watching professional football – as I write this, actually! Does that make me a hypocrite? No, it makes me a guy willing to ask questions about the ethics of entertainment. It also makes me someone who would like the “football question” to be decided by the general public, not a bunch of lawyers pursuing personal injury lawsuits, as suggested in Michael Sokolove’s NY Times Magazine article.

I enjoy football and can make a strong case for it. I can also make a good case for a time in the future when people will think of football fans as not so different from the people of ancient Rome who enjoyed gladiator combat in the Colosseum – sort of. Gladiators were typically slaves who fought not for a livelihood, but for life itself, with little or no chance of any exit from competition except by dying.? They were more like the bulls at a bullfight, than the football players of today.

Ultimately, we are a culture that seeks both to protect people from harm, and their freedom as individuals to harm themselves. Perhaps that means we should be regulating the sport when played by minors, or even by collegians, much more closely, rather than by making it increasingly like the sport as played by professionals. Perhaps it’s time to end the use of football players as advertising icons, much as we did with the Marlboro Man, even as we protected people’s right to smoke.

Ultimately, even if the lawyers can make it so, it seems misguided to cast football as the next tobacco. On the other hand, there is much we can learn from how we regulate tobacco, that could help assure that people, especially kids, are safer if and when they decide to play football, not to mention keeping fans mindful of the real costs of the sport we love.