In Art or Life, Imagine the Backstory 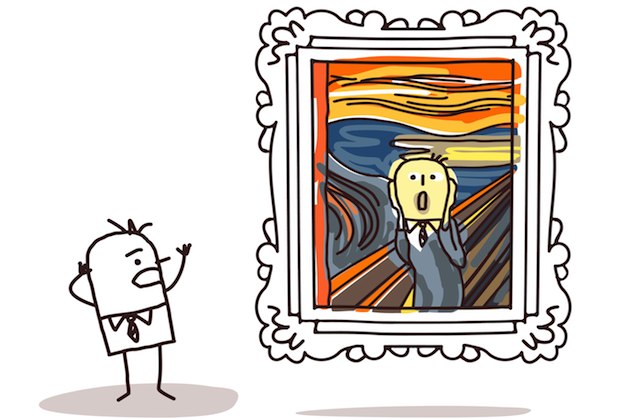 Did you ever wonder what happened to make the Mona Lisa smile? Or ponder the source of anguish in Edvard Munch’s The Scream? And why is the old man’s nose in Domenico Ghirlandaio’s An Old Man and His Grandson so puffed up?

The (True!) History of Art is one of the most hilarious books I’ve seen in a long time, and one of the cleverest ways to invite people to engage with the world’s great paintings. Through this book, Sylvain Coissard and Alexis Lemoine enable children and adults to look at instantaneously recognizable works of art with a different eye, preceding each classic painting with new, related images that visually tell the funny backstory.

So what caused The Scream? A strong gust of wind blew his wig off and people were going to see him bald! My favorite: Why is Van Gogh’s Bedroom in Arles so tidy?….It’s because he cleaned it up after receiving a text from his mother saying she’d be home early!

In some ways, this book is easy to dismiss as a series of punchlines about great works of art. Yes, it’s a wonderfully novel way to engage with great works of art, and you’ll find yourself coming back for a closer look at each page to make sure you took it all in the first time. But in a wry way, the book actually invites us to practice a central ethical skill: To embed what happens to us in a larger story and context.

Before you react to a scene in your daily life – someone cutting you off on the road, a friend who is argumentative, a child acting rudely, a colleague interrupting or ignoring you – try becoming a storyteller who gives the benefit of the doubt. Imagine for a moment what might have led up to that scene, and then try imagining something that can evoke some compassion and even some laughter. However you wind up responding, you’ll be a bit less judgmental and a touch less aggressive and angry.

There’s always a backstory to the scenes in our life. Getting in touch with it is an act of widening our moral imagination.