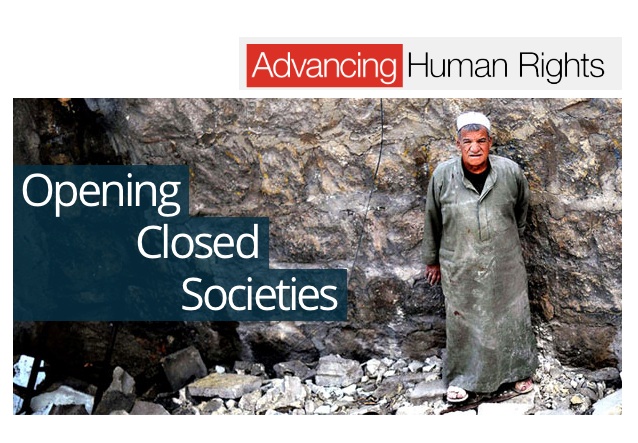 We are all for freedom and for human rights in general. But we also know that our commitment to insure that people live in free societies with human rights is often compromised, consciously and unconsciously, by both our individual and national self-interests. We buy and enjoy consumer goods that we know are produced in places (China) where dissidents like Noble Peace Prize Laureat Liu Xiaobo are imprisoned, we have alliances with and approve of massive arm sales to places (Saudi Arabia) where repression of the most basic human rights is the law, and we don’t care about billions of dollars of aid going to countries (Egypt) that imprison journalists like Peter Greste, yet alone where millions of women suffer female circumcision. Life is complicated and compromising values we hold dear and claim are sacred – for the sake of our self-interest, or making tradeoffs as they are sometime called – is inevitable.

But, every so often you meet someone who reminds you that “inevitable” is a choice we make, not an inescapable fate. A couple of months ago I met David Keyes, the executive director of Advancing Human Rights, an organization that connects and empowers dissidents in authoritarian countries. It provides technology to human rights activists in order to make their voices heard, and advocacy to leverage the U.S. government and other democratic societies for change.

Recently, David launched Movements.org a new crowd-sourcing human rights platform where dissidents and human rights activists can access a growing network of lawyers, publicists, journalists, and human rights advocates to help on a range of tasks from seeking asylum, organizing their efforts, or just getting the word out to the world about their struggle. He has also launched CyberDissidents an online database of active dissidents and their writing. David is at the forefront of using technology to explore new strategies in the fight for human rights for those living under authoritarian regimes.

It isn’t easy to listen to David because he does not let you get away with sloppy thinking nor easy living… he demands we take seriously what our conscience knows about being on the right side of history.

To meet David is to meet someone cool, calm, and rational with fierce arguments and profound stories that rattle your mind and shake up your heart. His passion for human rights is neither liberal nor conservative: it is uncompromisingly principled and always comes with a human face. He doesn’t accept arguments about cultural context or “respecting” local traditions that often compromise liberal commitments to human rights, nor does he accept real-politic arguments about national self-interest and security that compromise human rights on the conservative side. David argues in the name of those mostly unheard-from dissidents in all dictatorships who risk everything to fight for a society that respects human rights.

As millions of people increasingly demand freedom around the world and authoritarian governments and terrorist networks respond by tightening their grip, David’s clarion call – on ethical, political, economic, and long-term security grounds – is that economic and military aid from democracies should be provided only if linked to improvements of human rights. It isn’t easy to listen to David because he does not let you get away with sloppy thinking nor easy living. With clarity and foresight, with humor, irreverence and charisma as much as with facts, figures, and politically and philosophically sophisticated arguments, he demands we take seriously what our conscience knows about being on the right side of history.

One of his most recent campaigns to pressure regimes is Dissident Squared – encouraging policy-makers around the world to rename the streets in front of the embassies of dictatorships after political prisoners. This way, any time someone walks in and out of the embassy or writes about or sends something to the embassy, they are confronted with the face and name of dissidents in prison. This keeps the names of dissidents in the public awareness, which is often critical not simply to help get dissidents released but to keep them alive.

Daivd is now attempting to rename the street outside Iran’s mission to the United Nations in New York after Majid Tavakoli, an Iranian student leader and political prisoner. With the November 24th deadline on the Iran nuclear negotiations fast approaching, David argues that the thousands of journalists, bloggers, dissidents, lawyers and women’s rights activist jailed in Iran should be an issue. Many disagree.

What do you think?

Do nuclear negotiations and human rights have anything to do with each other?

Does a country’s standard of human rights make any difference in its trustworthiness in signing agreements?

Should human rights be considered a national interest in our foreign policy?

I don’t know. But I do know David makes me wrestle and makes me wiser. He embodies and witnesses the truth of JFK’s insight, “the rights of every man are diminished when the rights of one man are threatened.”