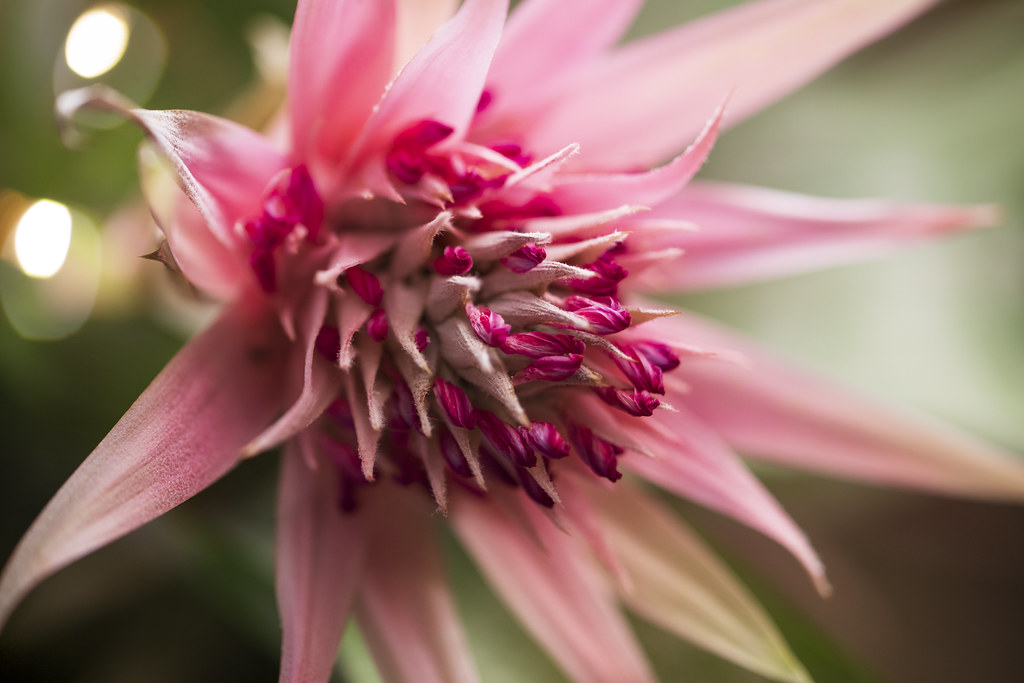 If you’ve Zoomed with me at any point over the last six months, you might have marveled at the gorgeous, hot-pink flower peeking out over the fine-toothed leaves of the bromeliad plant over my right shoulder. It really was a thing of beauty – from a plain-looking, unassuming pile of leaves emerged this breathtaking explosion of sharp, pink petals and bright lavender seed pods.

I’d never seen anything like it. I was delighted as it slowly unfurled over the course of a couple of early summer months, bringing color and hope into an otherwise challenging time. The plant was a gift – originally a pup sprouted from a larger bromeliad at my mother’s house; one of the countless succulents that fill her home with memories of a childhood spent in the desert of Be’er Sheva.

But as is beauty’s fleeting nature, the flower has now begun to fade, and so too will the plant itself. You see, bromeliads have a keen sense of their short time on earth. Right before they die, they produce one last rallying cry of life into the world: a flower full of self-fertile seed pods, and – if you’re lucky – a new pup peeking out above the soil right by the base of the dying plant. The bromeliad comes most alive in the face of its own demise.

Our portion this week is titled “Vayechi” – “and he lived,” but is ironically a story that largely centers on death. Early in the reading, Jacob moves on from this world at the age of 147. His last 17 years of life spent in Egypt, reunited with his son, were said to have been his happiest. And as the reading concludes, his son Joseph follows his father into the next world, dying at the age of 110 and – just as his father did – leaving behind a slew of blessings for the next generation.

As both men seem to sense death nearing, they both exert themselves greatly, mustering up all of their strength for one last series of graceful acts and blessing offerings before they move on.

At the beginning of the story, Jacob brings Joseph near, asking him to swear that he will return Jacob’s body to Canaan upon his death, posthumously reversing the great (and exhausting) journey he took in last week’s portion when he came into Egypt to be with his son. He then blesses his grandchildren, and then – one by one – offers a strange admixture of admonition and blessing to the rest of his sons. Observed through this lens of end-of-life rallies, perhaps he reserved the last of his energies for what must have been a painful task: reminding his sons of their missteps, perhaps in hopes of inviting them onto a more righteous path after his death.

Joseph’s last series of actions mirror his father’s, as well. He organizes a great caravan of mourners to accompany Jacob’s body to be gathered among his ancestors in Canaan and eventually returns to Egypt emotionally, spiritually, and physically spent. Perhaps sensing his brothers’ rawness after their father’s parting words, Joseph blesses them all, offering them kindness, comfort, and grace. And like his father, he asks them to swear that he, too, would be gathered unto his ancestors in death.

End-of-life rallies – those superheroic last gasps of the dying – are nothing new, and there are traces of these stories in a number of ancient texts. And while there are a plethora of theories about how these exertions seemingly defy the laws of science, they continue to remain a mystery. How do the dying muster up the strength to give one last blessing, take one last step, squeeze our hands one last time? And how do they even know when their time is approaching? This is precisely when I like to turn to Midrash when a dash of the supernatural might actually help shed more light on our human condition than any scientific method possibly could.

According to Pirkei DeRabbi Eliezer (1) – commenting on a report to Joseph stating “your father is sick (2)” – this is the first mention of any illness in the entire Torah thus far. Up until this point, everyone lived their lives in health and fitness until – one day – they would sneeze and their soul would depart from its corporeal home. But – initiated by Jacob’s prayer, God shows him mercy and allows him extra time to leave his children with guidance and get his affairs in order. How? By giving him an illness, which serves here as a sort of countdown timer for the dying. Rather than a means to bring about death, God gives us illness as a way to help us come most alive!

With the introduction of sickness, our biblical characters now have time to embrace their loved ones, say what needs to be said, and secure a legacy that will survive beyond their days on this earth. What a tremendous gift God gives them, and – in turn – our Midrash gives to us!

Who among us hasn’t missed an opportunity to reconcile with a loved one before it’s too late? To have one last all-night gathering with your friend group before, inevitably, you all move on to your own corners of the world? To sit with an aging grandparent, ask them all the questions you know they want to be asked, and record their answers so they can regale you with age-old stories long after they’re gone?

As many of us scramble to squeeze the lemon of 2021 and make new year’s resolutions to kick off 2022, perhaps we can heed the words of Rabbi Eliezer, who famously taught his students to repent one day before death. “But does a person know what day they will die?” his students inquire. “All the more so; one should repent today lest one dies tomorrow, and in doing so will spend one’s entire life in a state of repentance. (3)”

Perhaps, unlike our biblical ancestors, we can live into our best selves without staring down death’s door. Perhaps it’s not even the illness itself, but the simple reminder that we are only here for but a fleeting, liminal moment in time, and we are invited to live that moment to its greatest potential. Perhaps a decent stand-in, then, can be the many reminders of time’s fleeting nature we surround ourselves with: short-term countdowns like the impending ball drop, big birthdays on the horizon, or simply the weekly rhythm of Friday’s sunset to bring an abundance of light into the world before it goes dark. Or perhaps Rabbi Eliezer was simply inviting us to live up to the standard of the humble bromeliad, leaving the world with one last shot of transcendent beauty, whether or not we’re soon to depart from it.