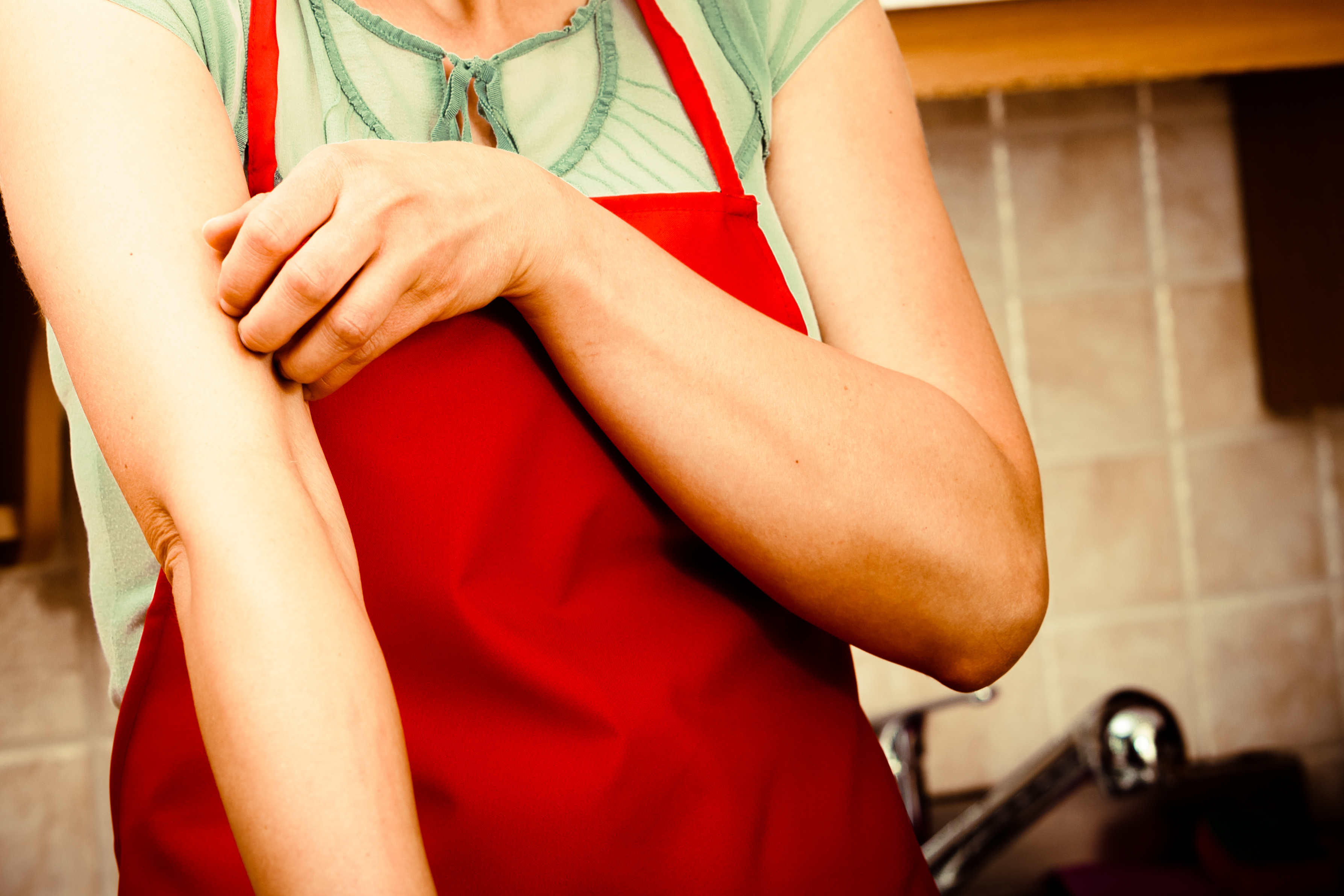 When I woke on a Sunday in mid-July with itchy swelling around my right eye, I crumpled. I had not been afflicted by this mystifying and distressing allergic reaction for more than a year. I thought it had slunk into the past.

I threw on clothing and headed to the pharmacy to buy an antihistamine, hoping it would alleviate the misery. It did not. By evening, both my lids had ballooned larger than ever, the skin sagging over the corners and surface of my eyes. The execrable itch made sleep impossible. I wanted to pluck out my eye balls, cool them in an ice bath, and pop them back in. A freezer pack provided fleeting relief. As the hours passed with an excruciating sluggishness, I remembered an allergic episode that had occurred a few years ago during Passover, as if I’d been pelted by personalized plagues.

This time, my face had morphed into a disfiguring mask on the birthday of my mother, a beautiful woman who has made exquisite care of her skin a high priority. For as long as I can recall, she has fervently impressed it upon me to do the same. I lack that ardor and discipline. I wondered if these eerily synchronous facial freak outs had more to do with emotions around religion and family than with an actual allergen. Just days before the July flare-up, I’d noticed that my neck felt taught, as if something had been trying to surface, but had become trapped in my throat. During my physical, I mentioned it to my primary care doctor. That his hands couldn’t detect what I sensed didn’t surprise me.

Was my body voicing, through itchiness, redness and inflammation, what I couldn’t articulate in words?

That deep feelings surface through the epidermis is neither absurd, nor impossible. A trauma specialist I know mentioned that during a period of intense personal change, her body broke out in a rash. As more of her buried emotions and conflicts surfaced and healed, it subsided. Our bodies will send us increasingly aggravating messages if we ignore subtler corporeal communications. It can be tempting to distract myself from gnawing discontent or to hope that swells of confusion will subside, leaving clarity in their wake. Yet, the incapacitating itch and my splotchy, bloated and distorted visage insisted on being witnessed.

The next morning I rose early and skipped breakfast, hoping I’d be first in line at the nearest CVS Minute Clinic. I wasn’t. After buying snacks and waiting more than an hour in a store under noisy renovations, my thin reservoir of patience evaporated. I told the nurse practitioner exactly which steroid medication I needed. Like a calm Zen teacher, she first asked me questions and examined my eyes. Despite itching and twitching like a junkie desperate for a fix, I realized I was glad she assessed me to see for herself.

What if she observed something that I, in my distress, couldn’t perceive? What if each episode had arisen independently, or different causes had led to these symptoms? In the end, she prescribed the drug I requested. This time, the steroid didn’t stop the itchy redness from spreading to my neck and bubbling on my fingers. The eruption, like a toddler’s temper tantrum, demanded my undivided attention. When I dared to look in the mirror, it’s as if long unacknowledged shame and rage stared back at me. Could I embrace them, even though they looked hideous? As my facial inflammation gradually subsided, my neck also returned to normal.

When these troubling symptoms first appeared a few years back, I’d consulted an allergist and showed him photos of my face at peak swelling. He explained that many reactions arise for undetermined reasons or could be stress related. Unless I narrowed it down to a few potential culprits, testing could be expensive and fruitless. He suspected I’d reacted to something I contacted outdoors. Since I spend many hours a week in the woods, often touching the plants, trees and mushrooms, identifying the allergen would be like looking for a needle in a haystack. I didn’t want to incur that stress, curtail my time outside or otherwise approach the natural world – my refuge, playground and main source of spiritual renewal – with a cautious attitude or full body armor.

A few evenings ago, I put on my noise cancelling headphones and listened to a lecture by Moshe Feldenkrais, a scientist, martial artist and visionary whose understanding of mind-body unity had been decades ahead of his time. A holistic thinker, he grasped that our experiences of ourselves arise within situations, each of which involves a complex and dynamic interplay of internal and environmental influences on our thoughts, feelings, behavior and health. In this 1981 talk at a seminar in New York, he responded to a man who complained about uncomfortably tight stomach muscles. Dr. Feldenkrais said that the tightness did not arise or exist independently of this man’s profession (teaching), his marriage and even his decision to become a teacher rather than, say, a surgeon. The man would need to consider what made him believe he had needed to tense those muscles in the first place. Discomfort can be a doorway to intimacy with oneself.

While I had not been to the woods that day, I’d worn the pants normally dedicated for outdoor adventures because they are light and comfortable. As I sat in my quiet cocoon and took notes on the lecture, I noticed faint raised spots on the black fabric. I scraped my finger over them and discovered they were dried pine sap. As I grew tired, I rubbed my left temple. Not long after, that area of my face began to itch. A glance in the mirror confirmed that my left eyelid had begun to swell. I swallowed an antihistamine and put a patch over my eye to avoid scratching it while asleep. The next day I drove to a quieter Minute Clinic a bit further away. Having identified a likely cause of the wretched itch, I had more patience for the wait and the exam. The nurse warned me that if I began the steroid that afternoon it might keep me awake. So would the itch. I took the first dose.

Despite this possible “answer” to the “problem”, questions linger: if I am allergic to pine sap, why didn’t I experience an intense reaction more frequently, given how much time I spend around evergreens, whose sticky residue clings to my clothing and shoes? Why didn’t it affect my hands or arms, which are in direct contact with the sap? Had my emotional state exacerbated the severity of the allergic reactions? I wondered if “pine sap” was nature’s clever way of offering a clue about what I need to investigate: What do I truly pine for now, not yesterday or a decade ago, or what I wanted as a younger woman but had been too afraid to pursue? What, aside from the onslaught of awful news, saps my energy and keeps me from delving into that question?

My desires and longings have often been vague, complex and seemingly irreconcilable, creating a paralysis as sticky as sap. Unlike a prescription, they can’t be easily fulfilled. Perhaps what my allergy has been trying to communicate is that I need to make contact with the unbearable itchiness of my soul and approach my sensitive heart with the same appreciation, patience and curiosity I bring to my encounters with nature. No matter how intense that becomes, I need to stay with it long enough so I can discover what is true.