Crisis of the Soul in America 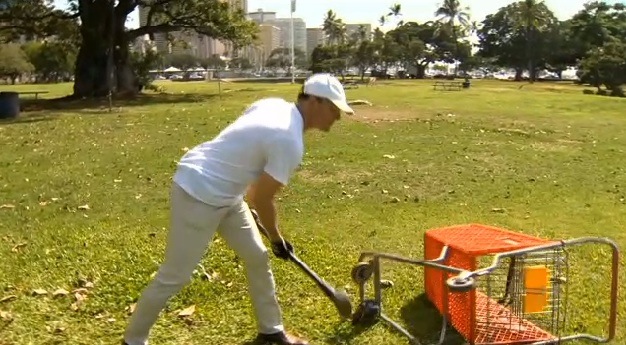 We are coming into the holiday season and something is badly out of whack in America – beyond our ongoing economic and political crises.? Take Hawaii State Representative Tom Bowers who, sledgehammer in hand, walks his district’s streets and parks looking for shopping carts used by homeless people, which, he then smashes to bits.? Bowers is “disgusted” by homeless people and is so proud of his tough guy approach that he allows himself to be filmed engaged in his grassroots effort to rid his district of the homeless. When asked if he was worried about stimulating a fight with a homeless person, he answered, “When you are walking down the sidewalk with a sledgehammer, people get out of your way.”

Now I know we shouldn’t draw conclusions about our country based on this very damaged person – who incidentally has not been arrested. But, given the recently enacted cuts in food stamps that affect more than 47 million Americans?- 1 in 7 Americans – including more than sixteen million children and given that 95% of the economic recovery has gone to the top 1% who have seen their income rise by 34% while wage increase for the 99% has climbed 0.4%, something is off.

The most basic teaching of every spiritual and ethical tradition on the planet is to take care of the vulnerable. How to do so, what policies to implement we can and should debate but there does seem to be a sort of Robin Hood in reverse operating these days.? Taking food from the most vulnerable should evoke outrage in all of us. Perhaps Tom Bowers’ anger at the homeless – and the anger raging through our society – is our disassociated guilt for not doing anything to mitigate homelessness and instead of feeling this guilt, we project blame and anger on the homeless…it’s their fault and we can feel better.? Tom Bowers may just be a cranky elected official or he may be an expression of a crisis of the soul in America – the very essence of our humanity.? As we enter the holiday season maybe we should take some time to do some soul checking. It doesn’t require a sledgehammer.