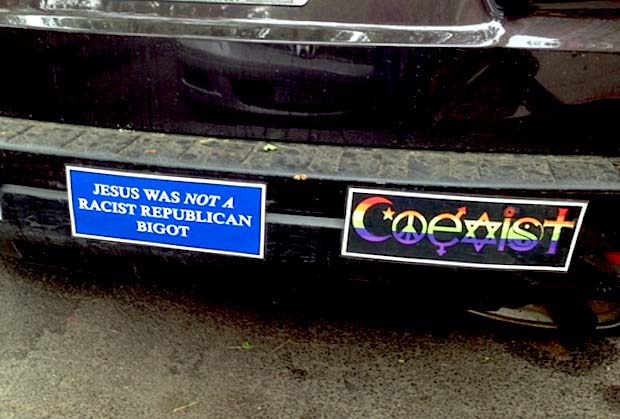 I was out walking with a friend the other day when I noticed these bumper stickers sharing space on the back of a car, and I didn’t know whether to laugh or cry. Okay, so I laughed – really hard – and then without crying, was actually kind of pained. Before telling you what I think, ask yourself what you make of the messages.

For me, the irony is intense. We’re encouraged to “Coexist” with a rainbow of faiths, traditions and identities, even as we’re also invited to heap abuse on Republicans – most of whom are, apparently, “racist bigots.”

Any God worthy of our worship is likely to be far bigger than whatever politics we profess.

Paraphrasing the ideas juxtaposed on the two stickers: Jesus would want us to get along with all people, except for those we humans claim, with metaphysical certainty, that God wants us to hate as a group! Unbelievable.

Or is it? Most people love celebrating the ability to reach beyond boundaries and find solidarity with others…until they’re too “other.” It’s very appealing to expansively extol the common virtues of Judaism, Christianity, Islam, male, female and the other identities captured in the “Coexist” bumper sticker – unless any of those identities cross any of the boundaries about which the driver of the car really cares (e.g., politics); then, it’s perfectly fine to narrowly declare who God is and what she supports.

It’s what makes my skin itch about so many coexistence, interfaith or bridge-building initiatives – too often, I sense they’re about building self-congratulatory bridges to ourselves, not crossing real boundaries; attempts to see ourselves in others and merely affirm what we see. Of course that, too, is an accomplishment in a world filled with so much divisiveness and polarization.

It’s not that commitment to coexistence means “no boundaries ever.” We all need boundaries, as much as we also need to transcend them. And political passion (like passion in general), is a good thing. However, shouldn’t we be able to agree that invoking God to curse others, no matter how wrong you think they are, is pretty much always out of bounds? Especially when it’s the kind of baseless group hate expressed by the blue “Jesus” sticker.

One could easily imagine a politically inspired bumper sticker that says: “When voting, remember that God made humans, not races,” or “Vote as God created – All people equal and loved.” Ironically, if the blue sticker (pictured above) had any basis in fact, my alternatives would better accomplish the goal of being an engaged voter without undermining a commitment to coexist!

This is not about choosing kumbayah coexistence over passion and principle. This is about passion for a principle of diversity which stretches us, as much as it invites others to stretch toward us, believing that any God worthy of our worship is likely to be far bigger than whatever politics we profess.