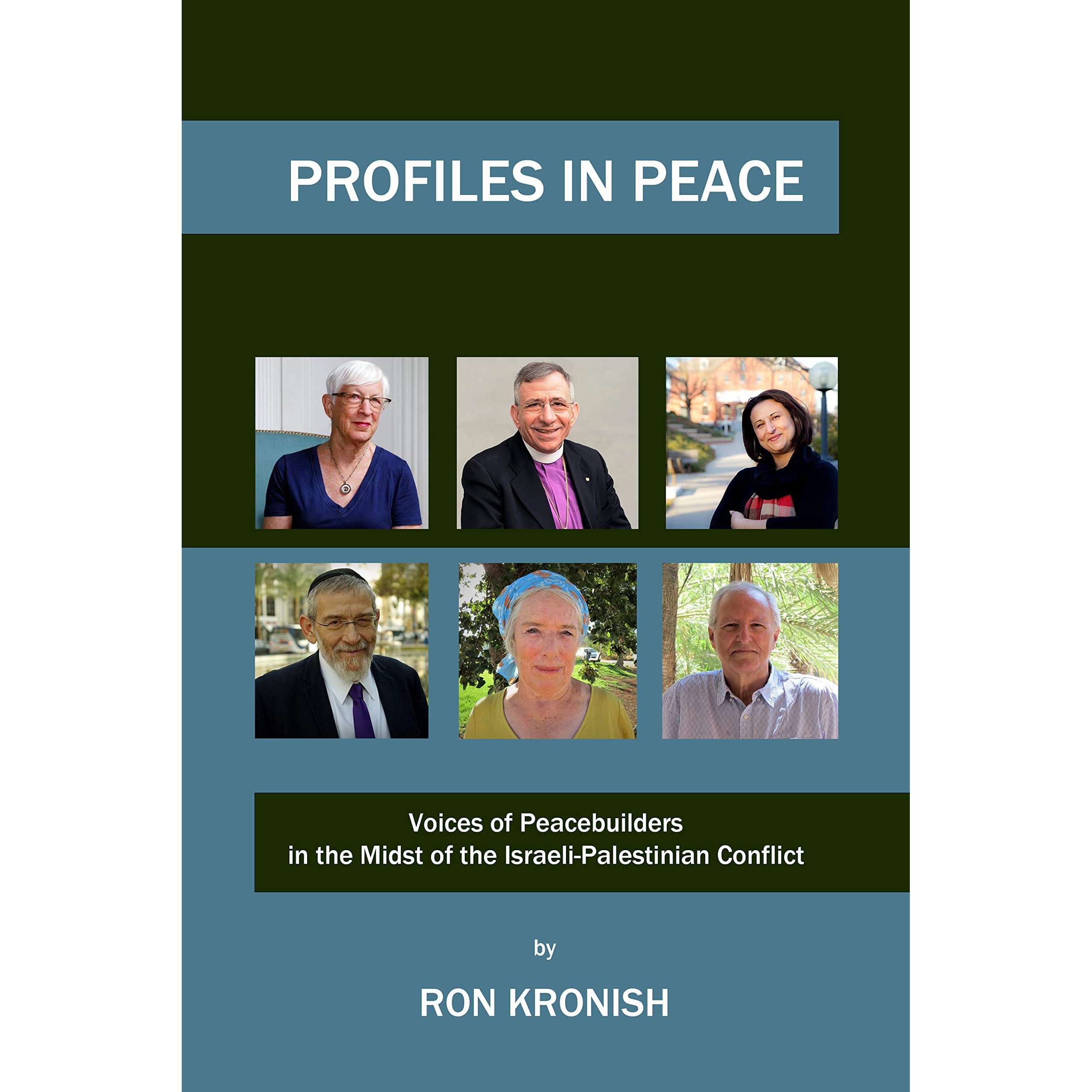 Ron Kronish is both an architect and a general contractor. Okay, he is also a rabbi and lifelong inter-religious leader who holds a doctorate from Harvard, but it is his lifelong work as an architect of peace and a general contractor of the structures which makes peace increasingly real that makes him worthy of one of the chapters in his most recent book, Profiles In Peace. It is also why having the chance to talk with him about that book was a treat for me and why his answers to my questions will be a treat for you as well.

Kohelet / Ecclesiastes  12:12 warns us that “To the making of books, there is no end,” suggesting that maybe it’s enough already with so many books and so much book-making. So, let me start by asking you — one author to another —   why another book, and what, if any, of Kohelet’s concerns accompanied you in the making of this one?

Rabbi Ron Kronish (RK): There are very few books about individual peace activists in Israel anymore. The subject has been “off the table” for a long time. Too long. I wanted to write a book on this topic to keep the vision of peace for Palestinians and Israelis alive and to highlight the work of people who are doing this.

Rabbi Brad Hirschfield (BH): In your view, is peace “simply” the absence of war, or something more as well, and why do you define it as you do?

RK: Peace is much more than the absence of war. But the end of war is the beginning of peace. Real peace means living in peaceful relations with your neighbors, your former enemies, in our case, the Israeli Jews and the Palestinian Arabs. This is why we need both peacemakers (politicians, diplomats, lawyers) AND peacebuilders (rabbis, kadis, imams, reverends, ministers, educators, etc.) to all do their part to bring peaceful coexistence to fruition.

BH: You distinguish between “peace-making” and “peace-builders” tell me about that distinction and why it is important.

RK: This is a very important distinction. Most people only know about the political-diplomatic “peace process” -which involves lawyers, diplomats, and international relations experts–which has been frozen for many years. It was alive and well in the 1990s, but since 2000 it has been largely abandoned by leaders on both sides of the conflict.

The only people now who are deliberately and seriously working for peace are the peacebuilders–people who are actively working to bring people to live in peaceful relations– rabbis, imams, kadis, priests, ministers, educators, social workers, psychologists, and many more people in civil society in Israel and Palestine, who are largely unknown in the Western World.

BH: The title of the book, Profiles in Peace, suggests that people’s personal stories are critically important to peace-building.  Why is that?

RK: Many of the people who are profiled in this book went through great transformations in their lives over many decades. Coming to know the other takes time and persistence.

If Palestinian Arabs and Israeli Jews are to live together in this land that we share, we must come to know each other’s personal and collective narratives better. This book will help people to do this.

BH: Much of your book refers to Palestine as the political entity(ies) in the West Bank and Gaza and refers to The Occupation as Israeli military control of the former and blockade of the latter. Given that most Palestinians favor a one-state solution to the conflict, including, it seems, one of the peace-builders you feature in the book, why do you define things as you do?

RK: I don’t really know what most Palestinians or most Israelis really think about the possibilities of peace or a one-state or two-state solution anymore. Neither option is very realistic at the moment (although I still believe that the two-state one is the better one).

What I do know is the Palestinians refer to their political entity as Palestine–they do so around the world, with ambassadors, and at the U.N. It is their collective dream to live in a state called Palestine, many of whom (but not all), realize that it will be side by side with Israel since Israel is not going anywhere.

BH: In describing the courageous work of Professor Mohammed Dajani Daoudi, you describe his leading Palestinians on trips to Auschwitz and taking Israeli Jews to Daheishe, a refugee camp on the edge of Bethlehem. Are you at all concerned about that apparent equivalence?

RK: Professor Dajani says very clearly, in the book and in all of his writings, that the Holocaust and the Nakbah are not equivalent historical phenomena. And I make a point to repeat this in the book, based on my interviews with him on this subject. Nevertheless, he believes, as I do, that we must learn about the suffering and pain of the other, with all the marked differences.

BH: Religious and spiritual identity plays a strong role in fueling the work of at least 4 of the 6 people profiled in the book.  Is there some common thread among them all, and what is it?

RK: The common thread among the religious peacebuilders is that their motivation for their activism is based on their very deep religious faith. Their religions inspire them to be proactive for peace. I feel that this is important since there is a perception that some interpretations of some of our monotheistic religions are pro-war and espouse violence. These religious peacebuilders understand their sources more authentically.

BH: You are, among many things, a rabbi, and I think many people see your work as a very sacred calling, so where does your own personal religious identity fit in all this?

RK: As a rabbi who became involved with interreligious dialogue in Israel about 30 years ago, I can say that it changed my life and my theology. Based on my understanding of our sources, I am commanded to care for strangers, to know them, and to treat them fairly.

Through dialogue with people of other religions, I have deepened my own identity, at the same time that I have opened myself up to the religious and national narratives of the other.

BH: The peace-building work you describe, by both Palestinians and Israelis, finds institutional support among both Christian and Jewish organizations — Israeli, Palestinian, and foreign — but not from Muslim institutions.  What challenges and opportunities does that suggest to you?

RK: I think that this is beginning to change. One of the major donors to my organization -the Interreligious Coordinating Council in Israel (ICCI) — was an American Muslim businessman from Northern California; the head of the international organization Religions for Peace is an Egyptian Muslim woman, and they receive funding from Muslim donors, institutions and governments; and I have attended international peace conferences–such as “Rabbis and Imams for Peace” which were also partly funded by Muslim institutions.

BH: Rabbi Michael Melchior says, “We have no vested interest in Gaza today, except for them to stop all of the violence in Israel,” and thinks that can be a basis for ending at least that violence.  But how is that not an argument based on the expectation that peace happens when “they” are more like “us,” which is what both war-makers and peace-builders often believe?

RK: Rabbi Melchior believes, as I do, that both sides are responsible for stopping the violence and negotiating peace. When diplomats talk of the “end of conflict,” they are talking about the end of the violence. This has happened in other countries, like Northern Ireland and South Africa, which are now in a post-conflict stage, in which former enemies are seriously working on how to live together in peace in the same land. This can happen in Israel and Palestine too!

BH: Toward the end of the book, you share with us your life-long commitment to envisioning a better future — what your former teacher at Harvard, Rabbi Israel Scheffler, called ‘Blue Skies Thinking.’ How do you nurture the capacity to remain bravely hopeful without succumbing to naïveté?  What defines each of those for you?

RK: Keeping alive a vision of a better future is hard but important. It is part of my religious upbringing, part of my pragmatic messianism. In addition, there are reasons for hope. Other seemingly intractable conflicts have ended. Ours can end too. And we have made peace with Egypt, Jordan, the United Emirates, Bahrain, and Morocco.

BH: You refer to yourself as a “messianic pragmatist,” which is such a wonderfully promising term and one about which I would love to hear more.

RK: I am a messianist because I believe that the world can be a better place, that the future will be better than the past, that the conflict between Israelis and Palestinians does not need to go on forever but can be brought to an end. However, this is not enough, just like going to synagogue, church, or mosque to pray is insufficient.

I am a pragmatist, too, since I – and my peacebuilding colleagues — engage in serious, significant, and sustained actions over time to do our part to bring about a better future.

BH: Writers are often changed by writing.  What, if anything, has shifted or changed for you through the writing of Profiles in Peace?

RK: I have come to respect these peacebuilders for their courage and resilience in their peace activism in the face of so many ongoing challenges and obstacles.

I have learned about the characteristic of persistence, the ability to keep going when the odds are against you. Much of the hard work of these peacebuilders has been done quietly and with a deep belief in the importance of what they are doing for us now and for future generations.

BH: Based on your deep experience in the field, what is one thing we might each do to build peace in Israel and Palestine?

RK: Each of us can begin by getting to know the personal and collective narrative of the other. This is the first step. Understanding each other better will lead to cooperative action, which can build peace from the ground up.

BH: What’s next for you?

RK: For the coming year, I will be promoting my book via book launches in person and via zoom in Israel and the USA. I also will continue to write posts on my blog for the Times of Israel -in which I promote my views about the importance of peace and coexistence — and book reviews for the Jerusalem Report, where I review books that have touched my life and affected my thinking. After that, I may write another book, perhaps about more peacebuilders. We’ll see.