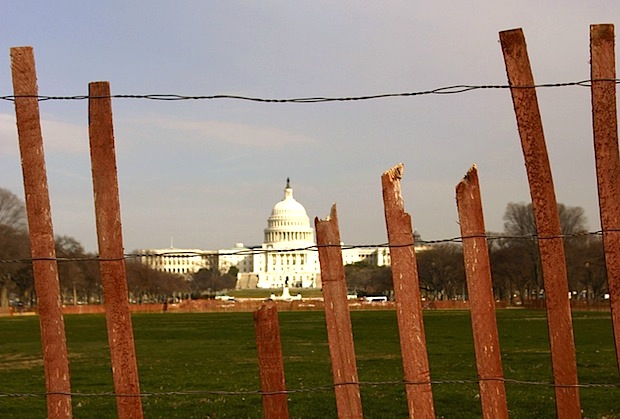 One shoe bomb attempt and we all have to take off our shoes at the airport… A failed liquid-bomb attempt results in restrictions on bringing 4 oz. of opened shampoo onto planes… A child drowns in a pool and legislation passes requiring pools be fenced in…

But an average of 300 shootings every day in America, plus, just in the years since Newtown nearly 150 school shootings and nearly 1,000 mass shootings (four or more people shot in one attack) – not to mention more than 20,000 gun-inflicted suicides, more than 11,000 homicides, more preschoolers shot dead in the U.S. each year (82 in the year 2013) than American police officers in the line of duty (27 in 2013). To say nothing of the wounded thousands who sustain lifelong complications from being shot, but aren’t tallied as gun deaths. And we still as a nation can’t come up with any collective response to the insanity of gun violence.

Our kids are in danger in the very places they are supposed to safely learn how to be contributing citizens. Our lives are in danger in our workplaces, malls and movie theatres. Even our houses of worship are not sanctuaries anymore.

Maybe it’s time to be honest with ourselves, as the stark truth might just set us free to find a path out of the carnage.

Where is our Congress? So polarized and corrupt that Congress today seems more opposed than after Newtown to moderate measures which even the majority of gun owners support (for example: extending background checks to private sales, online vendors and gun shows; restricting high-risk people from purchasing/retaining guns – such as domestic violence offenders, perpetrators of violent misdemeanors, alcohol abusers and people with serious juvenile records; and requiring a strong training minimum before any gun purchase). Our political class is so damaged that it has even, repeatedly, blocked the federal government from funding the study of gun violence and its public health effects.

Instead of trying concrete steps to lessen the number of tragedies, Americans continue to shout at each other. We remain the only developed country that has gun massacres so routinely that our president has to figure out what new response to give each time. Some glibly proclaim that guns don’t kill people – which of course is true, denying the deeper truth that people with guns (criminals, mass shooters, suicide victims, domestic abusers, bar room brawlers, gang members, children in homes where loaded guns are improperly, recklessly within reach) kill many more people than people without guns do.

We allow people with felony records to obtain a gun if their background check is not completed within three days. We pretend gun violence is connected to mental health problems, ignoring the fact that – per this Vanderbilt University research – people diagnosed with mental illness perpetrated fewer than 6 percent of the 120,000 gun-related killings in the U.S. between 2001 and 2010.

And anyway, claims that this is a mental health issue ring as hollow and cynical – because those making this claim usually refuse to actually invest in building adequate mental health systems.

We have a problem with gun violence in our country, which we (and our media) obsess over for a week or so after every mass shooting, inevitably resulting in a surreal mix of tired partisan tropes and increased gun purchases. Guns have become a perverse mutation – a symbolic expression of fetish, fantasy, paranoia, fear, and freedom. And guns are a $13.5 billion industry netting $1.5 billion a year in profits, with millions of that given to lawmakers (and candidates) in both state and federal legislatures.

Maybe it’s time to be honest with ourselves, as the stark truth might just set us free to find a path out of the carnage.

It may be that no amount of murders and mass shootings of innocent children will result in real gun control soon. However senseless the killings, collectively we’ve accepted the death count as a price for our freedom to own guns – though no society that sensibly regulates gun owners suffers from the absence of any freedoms, except the liberty and ease to murder their neighbors as they choose.

Whatever arguments we’re having, they’re not getting anywhere, which means en masse, we’ve made a moral choice we ought to own. Regulating firearms, and standing up to the industry that obstructs regulations that make guns more difficult to acquire, is apparently more difficult for us as an American people than letting go of whatever freedom or pleasure we feel in owning guns. And apparently, such regulations are more horrifying than the senseless bloodshed occurring daily here on domestic soil.

We may be afraid to admit it, but there will be more shooting tragedies like the one in the bucolic green hills at Umpqua Community College in Oregon. And though it’s easy to pretend that the shootings always happen somewhere else, our loved ones – or any one of us, ourselves – could be next. When that next massacre happens we will all feel horror and, hopefully, the appropriate empathy. But empathy without action is empty sentiment. It may even be an unconscious way to experience the illusion of moral progress without having to do the hard work of growing morally.

With all the empathy we muster up, we can’t seem to activate enough of it to stop the carnage. Given that, perhaps we need to claim our collective guilt. At some point, the truth will become bloody obvious: We all have blood on our hands.