Sounding the Alarm in America: The Legacy of Ferguson 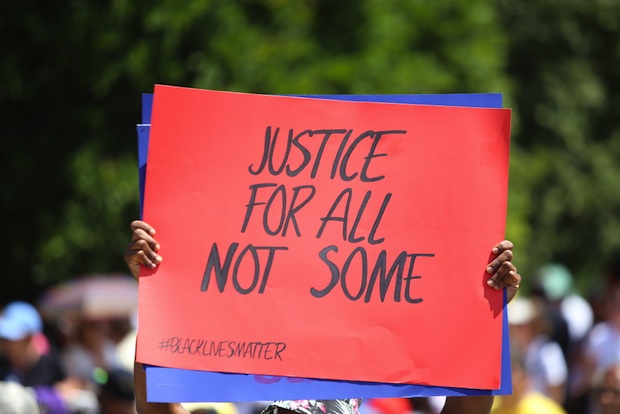 Originally published last year on The Wisdom Daily, this piece remains acutely relevant as we approach one year since the fatal shooting on August 9, 2014, of Michael Brown:

In the summer of 1982, I went looking for a new apartment in St. Louis (I lived and served as a rabbi there until 1987, making lifelong friends). There were many nice things about the area – the Arch, the Cardinals, Washington University, the Symphony – but race was not one of them. My introduction to the problem of race in St. Louis came on my very first day.

The real estate agent taking me around explained to me why I ought not rent in a section of University City that seemed urban enough for my wife and me – we were coming from Manhattan’s Upper West Side. “No, no, you don’t want to live there, Black people live there,” she said, without a trace of self-consciousness.

I rented an apartment in what I learned was one of the very few integrated neighborhoods, in one of the (still) most segregated cities in the United States.

A couple years later, I had my first experience understanding a reality that, to this day, most white Americans either don’t believe really exists in this country or, worse, think is somehow justified: police harassment of Black males.

We need to challenge one another, go deep and learn something difficult about ourselves.

One evening, I was driving on Olive Street Road, a main thoroughfare in suburban St. Louis, when I saw the superintendent of the synagogue where I was serving as rabbi – an African-American in his 40’s – sitting on the side of the road, surrounded by police. I’d known this man for four years. In fact, just a few weeks earlier he’d been honored by the city for running into a burning apartment building and saving a child. I couldn’t make this up!

I stopped my car, walked over, and asked the police (all of whom were White) what was happening. Brusquely, they asked me to return to my car. I explained I was a rabbi in the community and I knew this man as he worked for the synagogue. They made clear to me I was to go back to my car. I went back to my car and followed them to the police station. In the station, I explained that I knew and worked with the man who’d just been brought in. A sergeant told me if I knew what was good for me, I’d go home.

My colleague spent the night in jail. It took the police that long to sort out that a man driving a car in a white neighborhood was not driving a stolen car, but a car loaned to him by a family member. While I have more stories from my time in St. Louis, it certainly seems now that the more things change, the more they remain the same.

Yes, we have a Black president and a Black middle class, but it cannot be denied: We have dead unarmed Black young men in the street. The protests and media will depart from Ferguson, at least until the police officer who shot Michael Brown is acquitted. But the inconvenient truth is that we do not live in a “post-racial” society. We can make believe that this is a Black problem, but this is an American problem: The continued structural racism in this country – when it comes to poverty, education, housing, upward mobility, incarceration, criminal justice, healthcare, jobs – is devastating and traumatizing millions of American citizens.

The beginning of wisdom is not to blame others, but to be self-reflective and painfully honest with ourselves. All of us, in whatever group, tribe, constituency, interest group, political party, race, or community we’re in, need to ask what we do (or don’t do) to contribute to the problem of racial inequality in America. The questions need to destabilize our given opinions. The status quo is unacceptable. The anger, resentment, fear, alienation, mistrust, and pain are real. And if we are indeed an American family, then all of us, from progressive activists for racial justice to conservative protesters about white grievance, are implicated. We need to question our own certainties, for certainty is the enemy of compassion and imagination – the two qualities we desperately need if we are to finally resolve the injustice.

I can’t suggest what difficult and painful questions people in the Black community need to ask themselves, but I suggest that we who are White seriously and honestly ask ourselves what every dominant group needs to ask: What social and political privilege do we benefit from because we’re White? Or to put it even more simply, what do we never have to worry about because we’re white that we know Black people do have to worry about?

The death of Michael Brown touched a nerve and opened a wound in this country that is felt beyond this tragedy. We need to challenge one another, go deep and learn something difficult about ourselves. It just may be that truthful, uncomfortable self-critique can be the ground for listening to each other in new ways, and open the space for new understandings of what binds us as We the People.