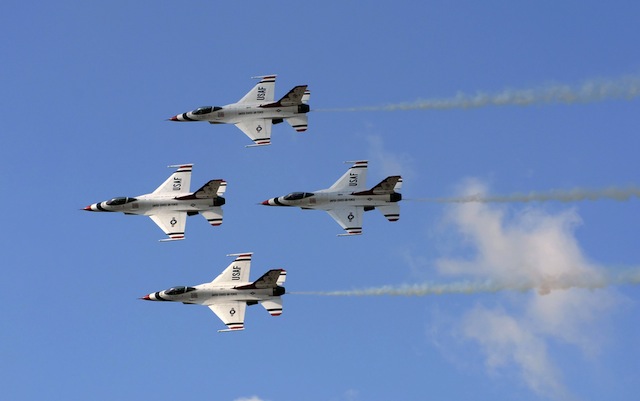 The United States Air Force has decided to make God an option; at least as far as the service or enlistment oath is concerned.? The oath is older that the United States itself, dating back to June of 1775, and has been administered in its current form since 1962, as follows:

Those enlisting now have the option of omitting those last 4 words, to which I say ‘Thank God’.

As a believer, I welcome this change in policy for precisely the same reasons that I reject the call by some to remove the phrase from the oath altogether.? Faith flourishes best when freedom of conscience reigns for all. ?I believe it is as simple as that, despite what faith-based or atheist-driven communities say.

To be sure, were the new policy a move to get rid of the words “so help me God” altogether, I would be at the head of the line to resist the change, for the same reasons I defend making it optional.

Those atheists and secularists who would like to see the words banned altogether are potentially dangerous absolutists who are no more committed to freedom of thought and conscience that those who would make the oath the province of any one church or doctrine.

It’s not that I would not prefer that people find a place for God in their lives.? I would.? And more than 87% of Americans say that they do so, from which I deduce a number of conclusions which should further allay the concerns of those upset by the new “God optional” policy.

The new policy is not a portent of declining interest in God.? As a nation, we may be less interested in choosing a singular religious community with which to identify, but that’s not because we are walking away from God.? We’re not.? In fact, the number of Americans identifying as atheists has been pretty flat for a number of years.? So there’s no reason to resist the change as a way to keep us from forgetting about God.

If anything, the change represents an increasing awareness of the need to respect multiple views even as we join together to protect the one nation we share and love.? That’s sounds like precisely the kind of approach which protects religious vibrancy in the culture by assuring that we continue to have a free market approach to ideas and beliefs.? That approach is what has kept America much more God-focused than anywhere else is the so-called ‘first world’.

The military is not perfect at balancing the needs of various faith communities, including those who are part of the faithless community, but what institution is?? If anything, military chaplains have often lead the way in figuring out how to serve the needs of all people with whom they deal, regardless of the faith followed by that person.

From battlefields to hospital wards to classrooms and prayer rooms, they regularly put the other person’s need ahead of the dogma which defines their own lives.? Or more accurately, they have figured out time and again, how their own particular faith can help them serve even those who don’t follow that faith.

By going God optional, the USAF continues the best of both our nation’s traditions, and those of our military, not to mention doing something good for the health of faith in our nation.? Truly, this is a moment when at least the believers among us should be saying, ‘thank God’.