A Reflection On St. Thomas Becket’s Murder In Canterbury Cathedral 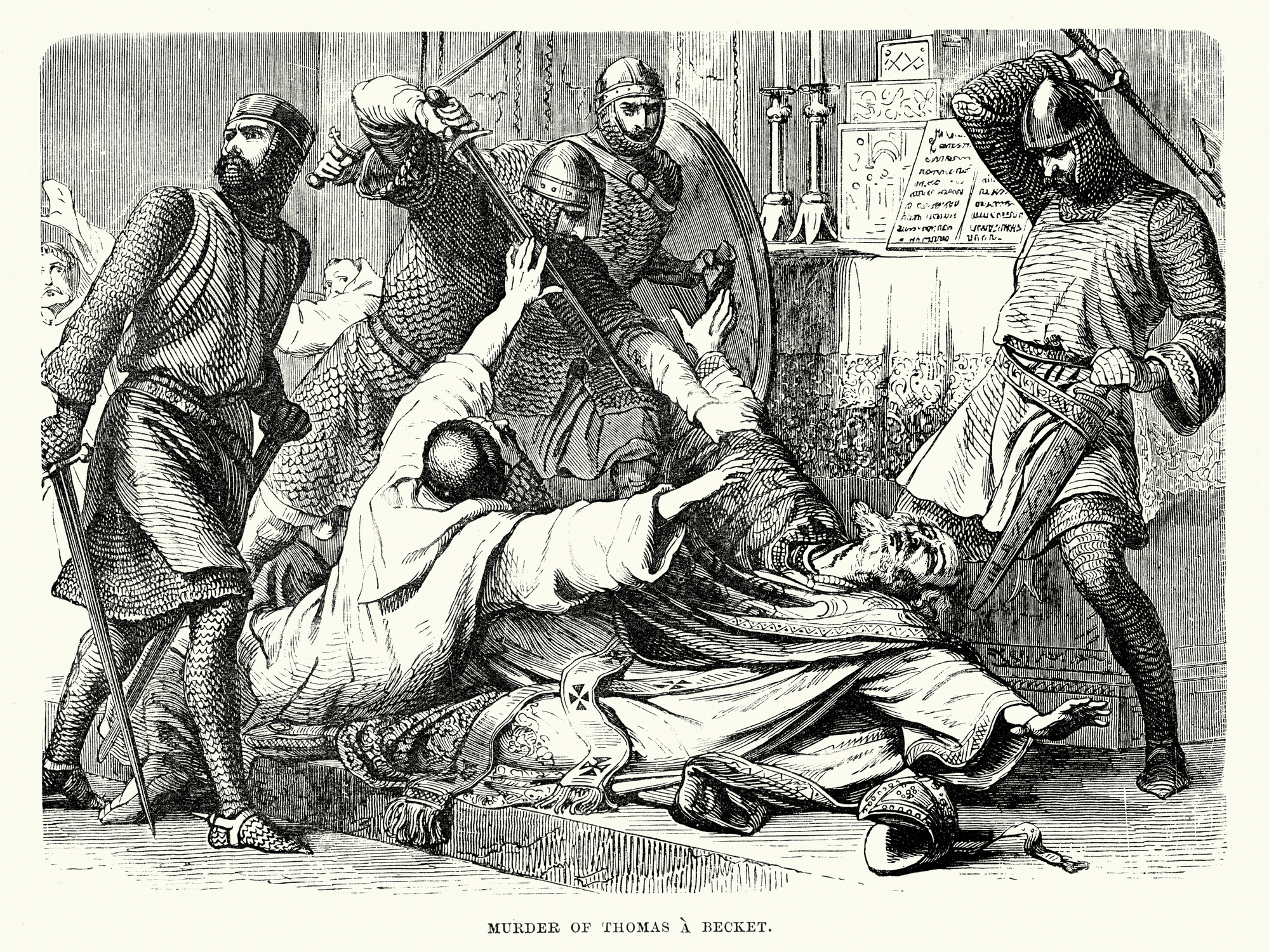 I recently saw it written that the burden of the Church is too unappealing, too much for anyone to be expected to bear: too much blood, too much sin, too much self-abasement, too strict a line to tread, too hard a thing to swallow without choking. But we bear no heavier thing than all the suffering and sacrilege of the world, for every twisted form of man’s own dehumanization, in themselves or towards their brethren, for every lust that blinds the eyes to the heart, and every pride that blinds the heart to the soul, and every greed that blinds the soul to its source is upon us. We enter the divine life, and so enter into the weave and warp of all things.

Yes, the crimson tidal splash is on us, as it was on our Master, and we take it on us willingly, entering into His wounded heart. Yes, yes, the blood is on us and in us, Christ’s blood fresh flowing, until the end of the world. It is our share to carry it all, ingrained in the wood of the cross, cutting into our shoulders, wounding the body and spilling the blood, rending the soul like a curtain, and emptying out divinity to the point of being forsaken. Yes, it is unappealing, this great appeal, this weight of glory that leads to the grave. It is the greatest of agonies that bleeds out into ecstasy. It is the depth of the unexplained paradox, the mystery of faith.

It is Becket unable to swallow back the blood trickling down his lips, hacked to death upon the altar stairs of his Cathedral, watching his killers strike through the flesh and bone, struggling to crawl, like a child still unable to walk, in the most pitiful form of humanity’s weakness, in that lack of control that punctures the pride of prestige. He looks in other eyes for some spark of pity, and finds none. No, none, they call him “cheapside brat”, and spit in his face. This is the folly of follies, the death of a son of Adam at the hands of self-same sons, and the murder of a priest of God by men become beasts. And the blood flows, christening the cathedral floor, just as Stanislaus had offered before, and Romero would offer later, a priest’s blood for the blood of the Lamb that washes us all in the flood of sacrificial love.

And if the word was severed from its source, the blood will carry on its message…

“O madam, I would give you the keys of Canterbury, and all the bells in London would ring to make us merry… if you would be my joy, my sweet and only dear and walk along with me anywhere…”

Yes, yes, your Bride the Church demands much, Thomas Becket. She will be your lover, but you must hold the keys, and ring the bells…

“O sir, I shall accept of you the keys to your heart, but keep them forever and never shall we part…and you will be my joy, my sweet and only dear, and walk along with you anywhere…”

Yes, yes, your Bride the Church is pleased with this much, Thomas Becket. You are the sign of chivalry, that pours out heart-blood for your lady love’s fairest hand…

The soul of England was shattered that day, and yet it was born anew from out of this “evil out of time”, this starkest of shatterings borne on the sword-edge of God’s honor. But in this way, does it not contain the seed of stranger things to come, of a tree of good and evil, of another king named Henry and the stripping of more altars, and the murder of more priests? Does Becket sense this as he dies; does it make his death? Is this the vanity of his own vanity? And does this fear haunt him? Does the flow of time flow forth with the blood, coursing clear, unable to be brooked? Is a culture dying here, slowly, to be blown away by strange winds like chaff?

For some would say he was no saint, too often struggling with pride, arrogance, ambition, too quick to anger, too stubborn in dispute. But it is a falsehood that saints are angels, made of pure light without shadow. No, no, they are men, flawed and fighting to the death. They put themselves, and all their imperfections upon the forge of God, and let the refiner’s fire do its work. They put themselves in a role of service, of sacrifice, of Becket angrily swearing at the men come to murder him, “A curse be on you all if you harm any of my people here!”

He was a shepherd, and his sheep knew his voice. They knew his grit and cunning and common parentage, and he was one of them, defying the king’s quest for supremacy, with no check held against it, and he was giving voice to all the voiceless, crushed beneath the wheel of the state. They also knew him or his generosity to those in need, his sympathy for the downtrodden, and his keen sense of justice in the ecclesiastical courts of law. If he could at times be harsh with men in power, he also knew how to stand in solidarity with the vulnerable, not unlike Christ, from whom he found his origin and authority.

He was Tyrion Lannister transformed; a man who at first scorned honor in favor of knowledge, of love in favor of pleasure, who yet finds himself sealed as a priest through the corruption of a king, his one-time friend and earthly master.  And Becket will act the part, indeed, become the embodiment of it down through the ages. He always had a heart beneath the veneer, and now it finds its source. He comes face to face with the honor of God, and is charged with preserving it untarnished. But the question is: will he do the right thing for the wrong reason? For some strain of pride in him, masquerading as piety? Is this, in the end, his greatest trepidation before the altar of all things?

Or in the end will it be the future that will haunt him in his final moments? Visions of a Church splintered as his bones, and the altars stripped and the blood running free, at the behest of another king named Henry…will it all seem for naught, this depth of priestly scarlet? Will it harass him in his weakness? Will it seem so very much like the end of the world, the end of an ageless age, crawling up the corridors of time and timelessness alike? Is it an ancient evil that cannot be quelled nor held back? For he says he is not in danger, but rather close to death. What paradox is this? And the people sing, “Clear the air! Clean the sky! Wash the wind! Take stone from stone and wash them…A rain of blood has blinded my eyes. Where is England? Where is Kent? Where is Canterbury?”

Yes, and ancient evil, yes a universal end. Yes, God slain on the tree, yes Becket slain on the altar, yes the priests and martyrs of a thousand ages, and especially those whose blood nourished English earth, like the blood in the chalices, passing over lips. For only in the end is there a beginning, only in the rain is there new growth, only in sacrifice is there beauty, only in death is there life. Thus, the last homily of Becket spoke of the birth of Christ and the death of Stephen, the first martyr of many, foreshadowing his destiny.

“A Christian martyrdom is never an accident,” reads T.S. Eliot’s Murder in the Cathedral, “for Saints are not made by accident. Still less is a Christian martyrdom the effect of a man’s will to become a Saint, as a man by willing and contriving may become a ruler of men. A martyrdom is always the design of God, for His love of men, to warm them and to lead them, to bring them back to His ways. It is never the design of man; for the true martyr is he who has become the instrument of God, who has lost his will in the will of God, and who no longer desires anything for himself, even the glory of being a martyr. And thus as on earth the Church mourns and rejoices at once, in a fashion that the world cannot understand…”