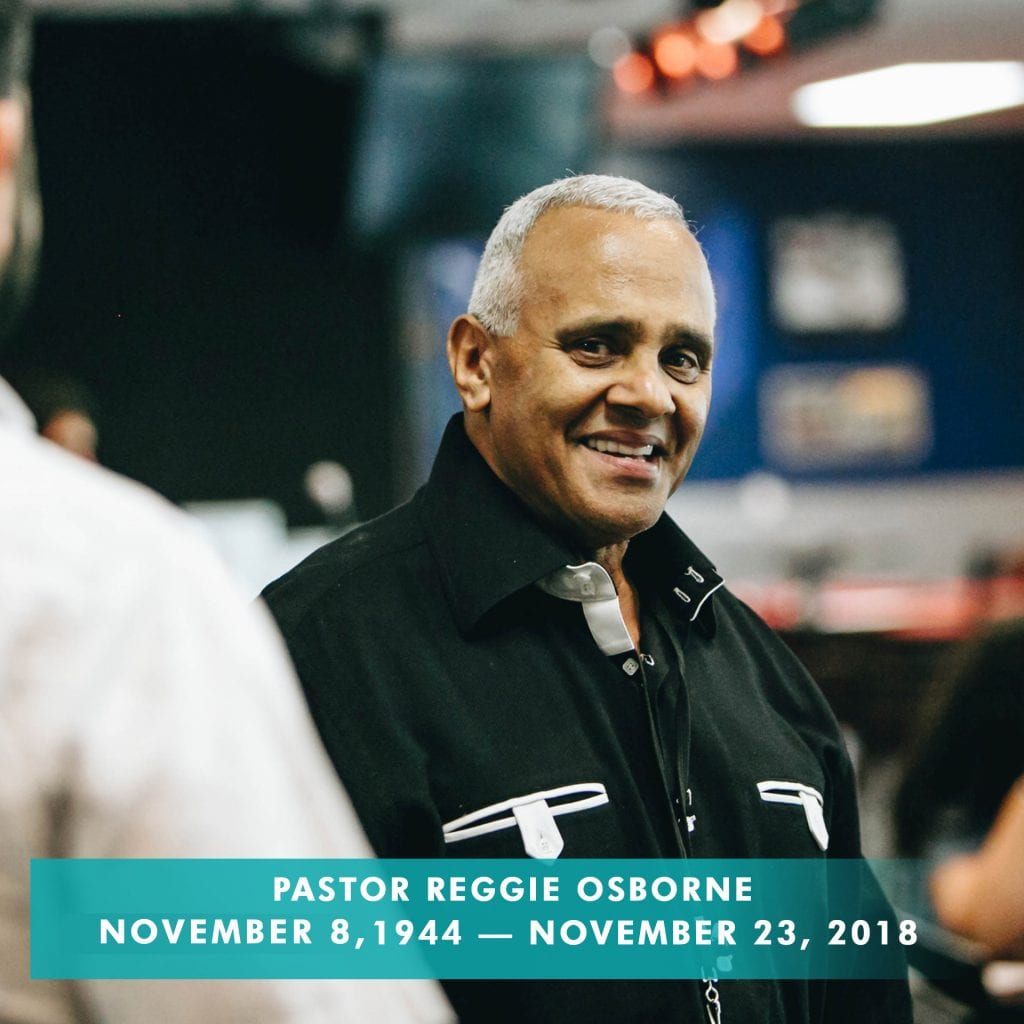 Sometimes we learn the most important of lessons from unlikely places.  I feel incredibly lucky for the formal and informal training I received to become a rabbi.  As well, I feel blessed to have been taken under the wing of rabbis in the field who taught me about what it meant to reach people in the real world.

And, unexpectedly, I have encountered people, whom I didn’t necessarily know I would meet, whom, by way of percentages, I probably wouldn’t have thought I would meet, but, indeed, changed my life.

I write about my dear friend, Pastor Reggie Osborne, who died this past week.  Reggie was a bit of wild child, as he described himself. By the time he was a young man, he decided that, to change his life, he would preach the word of God on the streets of New York City.  Perhaps, you have encountered preachers like this. Generally, we sort of steer ours heads down, walk by quickly and perhaps, hear a word from their expounding, as we try to avoid what we judge as crazy talk.

Well, Reggie did eventually leave the street-preaching business.   He and his wife, Dr. Marion Osborne opened a church in Newark. This was not just any church, but one they dedicated to ministering to addiction.  They sent vans through the streets of Newark and offered people the opportunity to recover from their drug or drink and come make themselves vulnerable to change in church.  From there, if they so chose, they would be sent to rehab. They fought the good fight.

I met Reggie Osborne about twelve years ago. We were introduced to each other through a small group a few of us put together in an attempt to reduce gang violence in Newark.  I was drawn to Reggie immediately. I was drawn to his modesty, charisma, humor, smile and dedication to whatever he could do to make our world a better place.

After our first meeting, he came over to me and said, “I like your soul, brother.”  I didn’t quite know what to do with the compliment, but I knew I liked his soul also.

We struck up an immediate friendship.  After a while, he asked if I would come be a guest speaker at his church on a Thursday night.  I wondered why Thursday night and not Sunday. After a while, I realized that he had never seen me speak in public and he was not ready to offer me his primetime spot.  Eventually, he did hear me and, before I knew it, he asked me if I would come speak on a Sunday morning.

This was frankly a dream come true.  During the week before I was to speak, Reggie called to give me parameters.  I asked how long I should speak (I go 10-15 minutes in my own synagogue on a Friday night) and he said, “Well, we usually go about a ½ hour, but you are our guest, so you feel free to go 45 minutes.”

I thought to myself that I would be fired for ever speaking that long at home. And, I also wondered what the heck I could talk about for that long a time!

On that December morning, I arrived at church with my wife, one of my most cherished friends and musical partners, and about 20 of my own congregants.  This was a different atmosphere than any of us had expected. There was a lot of music and some liturgy. But mostly, this was a prayer service constituted primarily of words of inspiration.

What I mean is that there were several sermons of preamble before mine. And, I mean sermons that rocked the church. They were words full of emotion, grit and vulnerability. People were swaying and praising with sweat and full devotion.  As I was wondering how I ever had a shot of reaching this level of homiletical artistry, my wife leaned over to me and whispered, “Honey, you are in big trouble.”

She was right. I was just not trained to preach with such drama; to expose myself to such an emotional degree; to be in dialogue with my parishioners, while I was actually speaking.  I wondered what I had gotten myself into.

When I got up to speak, Reggie could see the fear in my eyes.  Before he gave me the microphone, Reggie put his hands on my shoulders, like he was laying hands in order to bless and ordain me.  He whispered two things: 1- “Look at that cabinet of towels behind the Pulpit. You will need that.” I had no idea why or what he was talking about.  2- “Son, all you have to do is let Adonai (he used the Hebrew word for God) speak through you. Just let Adonai speak through you. You be God’s vessel and we will all hear your words.”

The next 45 minute period was like a transformative dream.  I started by telling the congregation about what it felt like for me to be there.  I told them that I was scared; I told them that my late mother would have been as proud of me that morning as any most any other. I let Adonai speak through me.  Really I did.

I had notes and an outline, but more importantly, I spoke as deeply as I had ever spoken.  I spoke with conviction and passion; with an openness that was exposing and fearless. I asked if they understood me and they yelled that they did.  I spoke and they spoke back. I laughed and they laughed harder. I cried and they cried with me. I whispered and I hollered; they asked for more. I would stop so my friend, Matt, could intersperse his spirituals with his guitar and magical voice. They sang with us. I told them that I believed in the power of healing. And suddenly and organically, 25 people approached the pulpit because they thought I asked anyone who wanted to be healed to come forward. It turns out that most of the 25 had literally come that morning after what they hoped would be their last high before rehab.

I looked at Reggie and asked what I should do. Of course, we offer prayers for healing in the synagogue, but we don’t bring people up to be healed in that way. Reggie implored me, “They need you son, heal them, just heal them. You know what they need.” And, I did. I laid my hands on their heads and I petitioned God to heal them… for them to find the strength and spirit to recover.  All of them got on the bus the next morning to start rehab at recovery clinics.

The 45 minutes I spoke felt like 5 minutes.  I had never felt as fluid or free. I consider myself a good speaker, but this was transcendent.  And, as I was finished, I was drenched and depleted and full. As Reggie hugged me, he pointed back to that closet of towels and he said, “Take one son, now you know what those are for and you deserve it.”

Reggie took me to school that morning.  I learned as much about being a rabbi in that Church in some respects as I had during 5 years of rabbinic school.  Yes, Reggie taught me. He taught me that preparation is paramount, but without authenticity, messages are not heard.  He taught me that being vulnerable doesn’t mean I have to lose control of the pulpit, but my rawness, simultaneously, will give permission for others to unlock their own spirits. He taught me that being humble enough to allow God to speak through me is a guaranteed manner through which to reach people.  He taught me to preach by speaking organically; by modeling generosity; by modulating to the cadence of my soul, not of my prepared transcript. He taught me that being me is the sure way to help others be themselves.

When I finished my sermon that morning in church, Reggie held me and told me he loved me.  I told him that I loved him also. He said, “Thank you for bringing the word of God to our community.  Thank you for having the guts to allow Adonai to speak through you.”

All of my training and experience helped make me the rabbi I am today, but my relationship with Pastor Reggie Osborne changed me and the trajectory of my rabbinate forever.

Reggie retired just a few years back.  Before he moved to Florida, we saw each other for dinner.  Before we finished, he said, “You know, you feel like a brother, but you also feel like a son.  Many people in my community call me “Pop”. I would love if you would call me the same. We are not just colleagues, but we are family. I felt the same and have called him such since that point.

My dear Reggie, you did your work here on earth in ways to which all of us should aspire.  I only pray that you rest in peace, Pop.