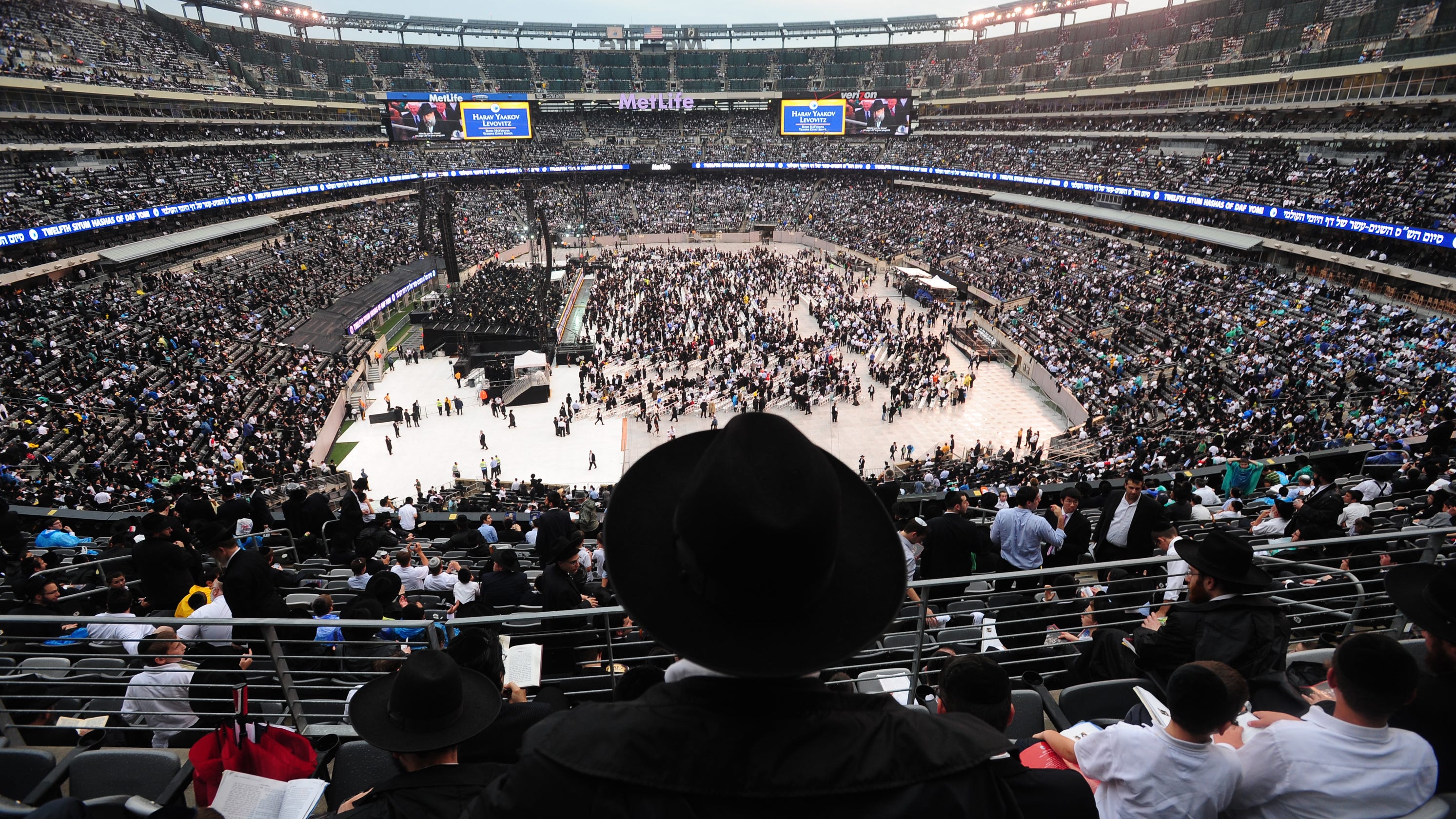 When the Siyum Hashas publicity blitz started several months back, I just rolled my eyes.  Siyum Hashas… I’d been there and done that and I wasn’t going to do it again.

My one and only experience took place in 1990 when I attended the gathering of Talmud learners at New York’s  Madison Square Garden. I had no real relationship to the Daf HaYomi. I went because I was dragged along by a friend with tickets.

I don’t remember much, just long speeches in Yiddish, a language I pretend to understand, but really don’t, and lots of movement in the men’s section–the women were stationary. From way up in the nosebleed zone, I observed wave after wave of men in black migrating to other parts of the stadium. What was the reason for this bizarre choreography? Was it a ritual dance or a digestive disorder experienced by hundreds or perhaps thousands all at the same time? Or maybe it was just boredom. Perhaps I wasn’t the only one who didn’t understand the Yiddish.

Like anyone who attends a religious rally, I had been hoping for inspiration. Created in the early 20th century, the Daf Yomi is a visionary concept, its goal is to unify the perennially disunited tribes of Israel by establishing a global community of Talmud learners, all of them quite literally on the same page. Yet, I left that Siyum not just unimpressed, but alienated and depressed.

Last week, the Daf Yomi learners finished their 13th seven-year cycle since the project began back in 1929. In 1990, I couldn’t claim any connection to the daily daf, but thank G-d, that was no longer true. Over the last several years, both my husband and sons had become Daf Yomi learners. Still, my bad memories remained so powerful that I didn’t even consider going to the Siyum. Why bother? I told myself. Hadn’t I been there and done that?

Then, on Shabbos, a close friend shared her experiences at the Israeli English-speaking event held in Binyanei HaUma “It was beautiful,” she said. “Very well planned. Great speeches, all of them in English, gorgeous music, dancing extremely moving.”

This friend is not a sentimental type. If the Siyum had been a flop, she would have said it.

Later that same Shabbos, a different friend reported the same experience. Now I was really curious. Right after Havdala, I looked online for a recording of that siyum. What I found instead was the US Siyum at MetLife stadium, an outdoor venue three times the size of the Garden.

I have to admit that the sight of 90,000 men and boys bundled up in mittens and wooly hats to attend a four-hour-long outdoor event in mid-January was impressive. It seems that Heaven obliged with sunny skies, temperatures in the mid-40s, no rain or snow.

That was moving enough, but what threw my tear ducts into high gear was a brief clip showing the real guest of honor, the foot soldiers of Talmud study, men from everywhere who study the daily folio. The video showed mini bytes of daf yomi groups in London, Paris, Baltimore, Cleveland, and Gibraltar… some in English, Hebrew, Yiddish, Spanish, French, Russian and possibly some other languages too. I saw a group on an IDF base, a group at the Western Wall, a group on the Long Island Rail Road.

This display left me so choked up I couldn’t spit out a sentence. So many Jewish men connecting with our deepest vein of wisdom, the Babylonian Talmud, so many men trying to understand the mind of G-d. And, other than the absence of women, the diversity was heartening. Some learners wore traditional religious garb, others knitted kippot, and others baseball caps.

There are women’s daf yomi groups and they held their own separate siyum. Good for them! While I tip my sheitel to their ambition, I am not tempted to join. At my co-ed yeshiva high school and later on at a progressive seminary in Jerusalem, I had more than my fill of Talmud study.  It’s well… Talmudic, complicated, abstruse, hairsplitting, occasionally whimsical. I don’t have a gemora kup, the legendary Talmudic brain to make sense of the folio pages with their micro-scripted commentaries, but I’m glad that my menfolk do. It’s not easy.

I know about the self-sacrifice involved as I see my husband still exhausted after a long day of work rousing himself from the briefest of catnaps to venture out in the cold or the rain to make his shiur .

I also know about rescheduling shopping trips or date nights or leaving weddings or family parties early so that hubby can catch his shiur. I’ve also witnessed the camaraderie that comes from participating in a group that shares a common goal. When my husband’s mother passed away, the shiva house filled with my husband’s daf yomi buddies.

And so it starts again. Another cycle, Another marathon. If  G-d grants me life, I know where I’m planning to be in seven years. At the next Siyum Hashas.

Joan Orange is a writer who loves to share her observations of Jewish life.