Whose Hands Mean the Most to You? 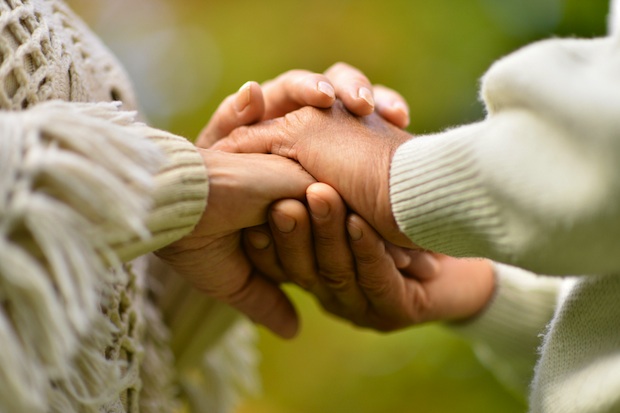 This month, the Whitney Museum of American Art opened the doors of its new building in Manhattan’s meatpacking district. One of the inaugural exhibitions, America is Hard to See, includes my favorite work of art: The Artist and His Mother, which?Arshile Gorky worked on from 1926-’36.

There are two popular interpretations for why Gorky, an influential pre-abstract expressionist, spent a decade and ended up depicting his mother’s hands as white circles. Some say Gorky’s loose, painterly style was conducive to leaving parts of the work incomplete, because his memories of his mother were distant and patchy. Others theorize that her hands are meant to appear covered or wrapped, to highlight her tragic absence in his life by alluding to her inability to touch.

Inspired by a pre-World War I photograph of Gorky standing next to his mother, the painting evokes loss, memory, and a search for home. These themes were prevalent in his art, likely because when his father fled to the U.S., seeking refuge from the Armenian Genocide, he left his wife and four children to be sent on a death march; Gorky was still a boy when his mother died of starvation in his arms, after which he emigrated to America at 16.

I saw the painting in person recently, but I first began thinking deeply about the work while recuperating from an injury to my finger four years ago (I’d cut it while cooking dinner for friends).

I spent a lot of time tending to, and analyzing, my hands. Valuable for assisting us in nearly everything we do, hands are also meaningful for sentimental reasons.

Hands are evocative of memories, and they’re telling of characteristics such as age, gender, marital status and career.?I know exactly what the hands of each person I’m close to look like, even the hands of people I love but haven’t seen in years. My Grandpa Jules, who passed away nearly four years ago, had large, thick, strong man-hands; he bit his nails painfully low (and always had rough cuticles as a result). He was a gardener who loved sports. He was a great tickler, a capable Halloween pumpkin carver and he always won our thumb wars.

Thinking of my mother’s hands immediately brings me to the comforting feeling of my parents’ home on Friday evening. The apartment smells like burning candles plus the airplane on which my father’s just returned from a business trip, incorporating the aroma of roasted chicken with garlic and onions – which I can see my mother chopping with her swift, competent hands. She has short nail beds and the unpolished, neatly clipped nails on her moisturized hands look just like my younger sister’s. My mother wears only one ring, her grandmother’s engagement ring, and says she owes a lot to her grandmother, who imbued in her a love of yoga and a commitment to feminist values – which she, in turn, passed on to my sister and me. I vividly imagine my mother, with that ring set to the side on the kitchen counter, preparing one of her elaborate Sabbath meals as my sister and I set the table, discussing the day and listening to Crosby, Stills, Nash, and Young.

I’ve been conscious of hands since childhood. At six, I would stand by the window waiting for my best friend Yael to come over, and forcefully press my fingers into the window sill, hoping to widen my fingertips so they’d look more like hers. Yael played violin, and I imagined that her musical skill was due to the shape of her hands. I later learned that her talent actually came from intense practice. To this day, my lifelong friend and I laugh about that pre-playdate ritual.

Perhaps Gorky did deliberately leave his mother’s hands unfinished on the canvas because it was too painful to recreate this nostalgic part of her. He must have missed watching her use her hands, feeling the comfort of her embrace, having a mother altogether. His choice serves as a reminder of the visceral and emotional role hands play in our lives.

On the evening when I bandaged my hand, I realized that it looked quite like the hands in Gorky’s painting. And that gave me perspective: My pain was merely from something as mundane as an injured finger.

When viewing a work of art, according to Rika Burnham (educator at the Frick Collection), “You have to stop in the deepest sense… Otherwise you do not see anything.” The Artist and His Mother has enhanced how I see hands, the blessings in my life and, above all, how powerful and revelatory it is to connect art to our personal experiences.

Gabriella Kula is a freelance museum educator working with early childhood, school, family, adult, and access groups at The Jewish Museum, The Noguchi Museum, and The Cooper Hewitt Smithsonian Design Museum and is the director of Havurah, the JCC Manhattan?s creative Jewish education program for children three to eight years of age. Gabriella is passionate about experiential learning and is committed to offering people meaningful, challenging and fun experiences that deepen imaginations, bridge boundaries and cultivate community, and inspire dreams of new possibilities for the world.