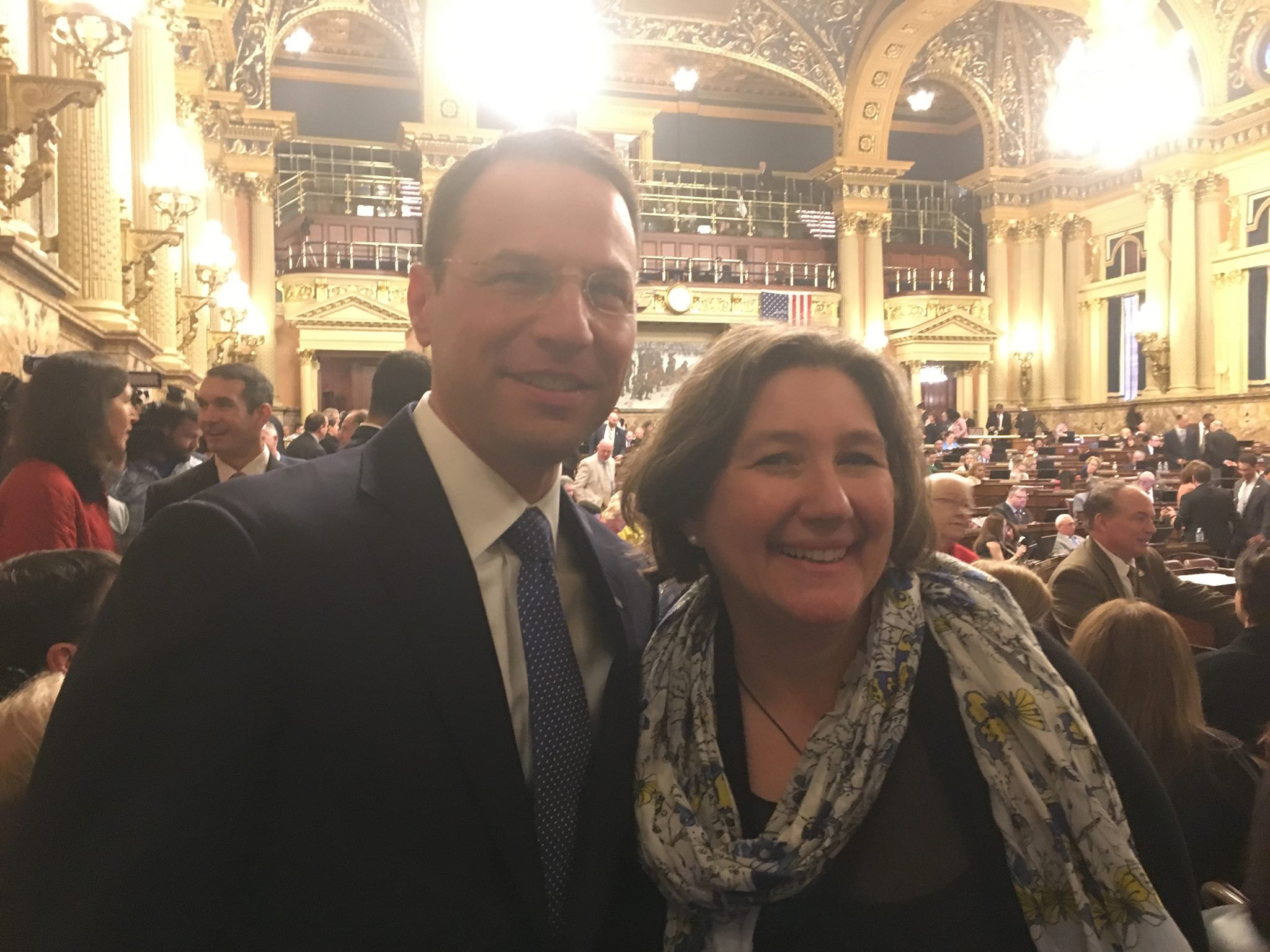 You have a place.

To hear these words in the closing video produced by my new governor brought tears to my eyes today, two days after Election day when his victory was certified.  The main reason for the tears is that since the February 2017 desecration of the  Philadelphia cemetery, Mount Carmel, where my great grandparents Bertha (who I am named after) and Harry Reisman are buried, I have wondered what my place in America is as a Jew.  I worried that this disturbance to the dead meant that as a live Jew, I no longer had a place here.

Who would find the dead threatening and their existence so problematic as to knock over their stones and disturb their eternal rest?  The barbarity of people overturning 530 gravestones, as well as the suggestion by the president at the time that this vandalism happened only to make him look bad, terrified me.  I wrote at the time about that as well as the loss of confidence in America where my family has lived for almost 150 years.

And now, my governor-elect Josh Shapiro ran a race in which he used his Jewish identity to connect with voters of all faiths and backgrounds. As Holly Otterbein wrote in Politico in September 2022, “Shapiro hasn’t downplayed his religion out of a fear of appearing different. To the contrary, he’s made his faith — and fighting antisemitism — a central part of his political persona.”

When she asked him what had changed between the time of Jewish governor of 1971-79 Milton Shapp, who changed his name from Shapiro, so that this Shapiro could run under his given name, he responded  “I think Pennsylvanians are tolerant. And I think they’re understanding and inclusive and accepting.”

That sentiment has been the cornerstone of his race against an opponent who, according to Shapiro “peddles racist things, he peddles antisemitism, Islamophobia, homophobia, you name it.”  In a state where on one end, my ancestors’ cemeteries were desecrated and on the other eleven Jews were killed in a synagogue on a Shabbat morning in the largest antisemitic massacre on American soil, to have a governor run and win on a campaign based on the appeal to tolerance and harmony feels like nothing short of a miracle.

Actually, it feels like a balm, which is really the word that comes to mind, or a tonic.  An antidote actually, to all the hate and indecency I and my family and my Squirrel Hill community have experienced, is knowing that the voters in my state preferred (by a large majority), a Jewish candidate who thought that he could connect with voters by showcasing his faith, having a launch ad that says, “I make it home Friday night for Sabbath Dinner because family and faith ground me.”

Though Joe Lieberman never hid his Sabbath observance in his campaigns, I don’t believe he led with it either.  Shapiro, on the other hand, is sure of himself, confident that sharing with voters who he and his family are and what he stands for will enable them to relate to him.

As Otterbein wrote, “he deliberately highlights his religiosity to appeal to Christians and people of other faiths who might feel alienated by Mastriano’s brand of religion-tinged conservatism.” Shapiro stated to Peter Smith at the Associated Press that  “My faith grounds me and calls me to do public service. I don’t use my faith to make policy decisions or to exclude others the way my opponent does.”

The choice for Pennsylvania voters was clear. The Trump-endorsed Mastriano was a candidate who had a Messianic Jew play a Fiddler on the Roof parody at his closing speech on Election day, and paid a consulting fee to the platform Gab, the site where the Pittsburgh synagogue shooter posted his screeds before his words ultimately became deeds.

I was terrified at the thought of having a man like this as governor, a man who thought that consorting with known anti-Semites like Gab founder Andrew Torba is acceptable.  Mastriano was at the Capital on January 6, 2021, and was a proponent of the lie that the election was stolen, so having him as the governor of a highly strategic swing state like Pennsylvania was unnerving from the perspective of fair democracy, a huge issue in this race.

To instead have a governor who cares about Shabbat, sends his children to the Jewish day school that he himself attended and where he and his wife met, and has been to Israel more than a dozen times as he told the Jerusalem Post, seems a better version of reality than I could have dreamed had I thought up my ideal Jewish candidate.   Shapiro even told the Jerusalem Post in April that “The US and Israel enjoy a special bond that will not be broken,” he said. “I look forward to stronger ties between Israel and Pennsylvania.”

What is most exciting for me as a Pennsylvania Jew, a day school parent and parent of a child who wants to enter political life and remain a religious Jew is that Shapiro is able to use his own faith and values to connect with others.  As he said to Otterbein, “I’ll be a governor that relies on my faith and my upbringing to actually look out for everybody,”

This week culminates with the fourth yahrzeit of the 11 Jews killed at Tree of Life, New Light and Dor Hadash congregations here in Squirrel Hill. It is still hard to accept that this could have happened, in America, to people I knew, at the synagogue where my husband is a rabbi.

To have a governor of our state who publicly and proudly speaks of his Sabbath practices, quotes the Ethics of the Fathers regularly, and loves and visits Israel feels like a wonderful antidote to the hate we have experienced.

I hope that the work Governor elect Shapiro does, leading with his own faith and teaching others about his Jewish values can continue to be a balm to Pennsylvanians and to Americans around the country who want all Americans to have a respected and honored place here so that no one, living or dead, will be harmed by others because of his or her religion or beliefs.