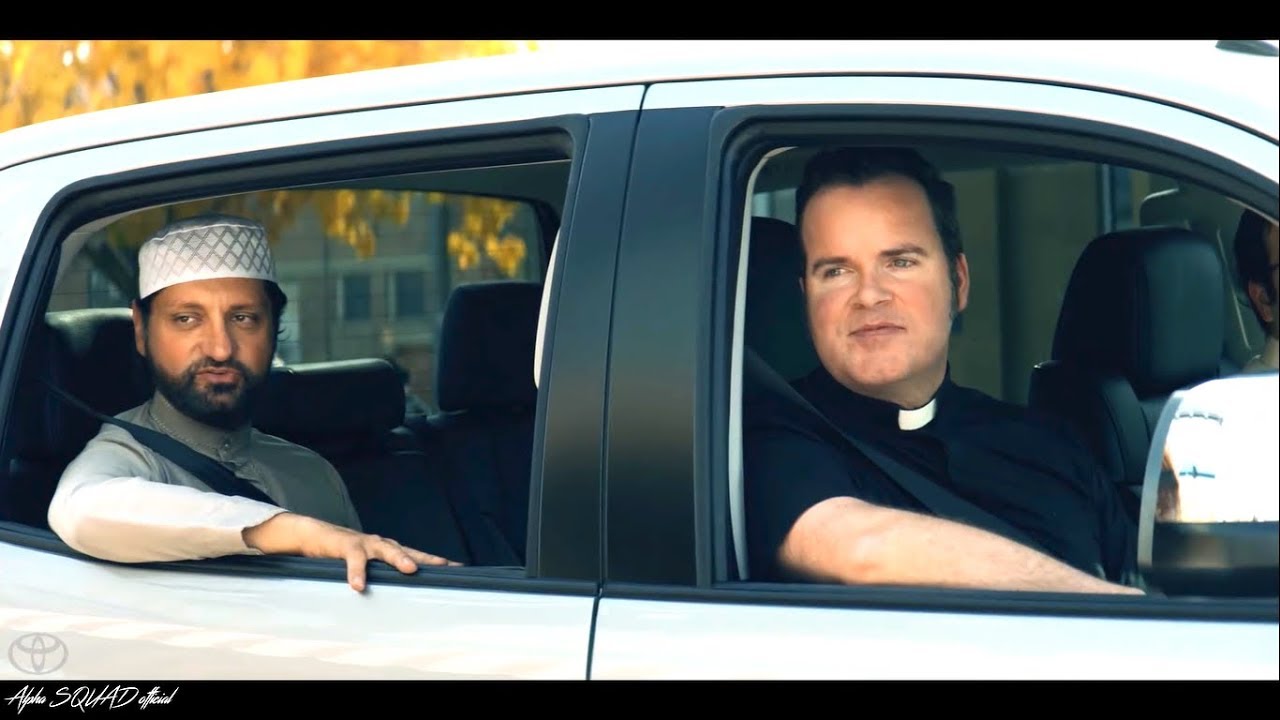 A rabbi, a priest, an imam and a Buddhist monk hop in a truck… No, that’s not the beginning of some Borscht Belt joke.  It’s the opening of a Toyota ad which aired during last night’s Super Bowl.

The four religious figures proceed to a “big game”, changing their respective religious garbs into team-colored religious clothing as they enter the football stadium where the game has already begun. The ad reaches its culmination as all four – plus a few nuns thrown in for good measure – cheer as their guys score a touchdown and we are reminded by the ad that “we are all one team”.

I was sitting, surrounded by friends, as the ad rolled.  Almost immediately, they shouted, “we know what Brad will be writing about tomorrow!”

While it is true that I am always on the hunt for expressions of faith and religion in the public culture, I immediately groaned and commented, “Oh please!  Do we really need one more, sappy, unsophisticated, Kum-Ba-Yah moment?  Does that really accomplish any good?  Worse, such vignettes might actually help us to avoid the really serious religion-driven issues we face today.” That was my initial response, but, clearly, not my final response.

Why? Because we are not all one team… and we are.  Honoring both of those facets of human experience and identity is the genius of the ad.  It is also a deep truth to which more people better get woke, or more people will suffer and die.  Sorry to be so brutal, but that is the way it is.

We are not all one team in the sense that people have particular attachments to particular traditions, teams, nations and ways of being in the world. If you have seen one, you have not seen them all, and each of them has unique gifts which are often neither replicable, nor reproducible from inside other traditions.   Pretending otherwise is the approach which invites people to betray who they feel themselves to be, in order to live well with those who they are not.  It just doesn’t work – not, in our personal relationships, and not across the borders of national or religious identity — and we need to let go of that approach.

It’s not just the devil that is found in the details, as the old saying goes, but for many of us, it is God who is found in those details, and why should people give up on the details which help find the God, the meaning, the purpose or the identity they seek?  They shouldn’t, and they won’t.

We are not all one team.  And yet we are.  This is where the sports analogy is perfect, especially for someone like me, given my relationship to the teams which competed in last night’s Super Bowl.  I am a life-long Chicago Bear’s fan, and to be honest, I really don’t care about the Eagles, and actually derive a certain pleasure from “hating” the Patriots.  With all that, I was totally stoked about the game, and would have enjoyed it about the same, whichever team won.  Why?  Because in addition to loving “my” Bears, I love football.

The Bears are my team, but so are the NFL and the sport of football in general.  I am a member of many teams and I can be on them all at the same time.  That is actually how I would distinguish between a sports fan and a sports fanatic.  The fan loves his team, but also loves the sport.  The fan loves to see his team win, but enjoys a great game either way.  The fan wants every call to go their way, but deep down understands why that would actually undermine the game.

What’s true for sports is true for religion. I love my team. I believe that God has put me on this team, and that I am called to play for it with “all my heart and all my soul and all my might”, as the Bible says.  I also know that my team is part of a grand game that encompasses far more than my team alone, and that I am a part of the larger team who have devoted themselves to that grand game.  Sometimes the differences can be tough, but ultimately, in that sense, we all are one team and the grand game will collapse upon itself and upon all of us if we forget that.

We are all one team, and we are not, and we are all invited to honor that mix – be it in the stands, in the pews, in the halls of government, or anywhere else.  Whether Toyota was conscious of creating that message or not, I cannot say, but it was there, and I am grateful for it.

As to the critique of religion I mentioned earlier…  That was there too, and I am grateful for that as well.  The ad works so well precisely because the challenge of being one team is so often fumbled by religion and religious leaders.  No, we/they are not alone in that failure, but we could do a whole lot better than we often do, especially at balancing the double needs of loving one team, even as we appreciate that we are actually also part of that larger team.  But take heart religion fans, because the news is not all bad.

We may differ about the exact mix, but that is the game we are called to play, and which Toyota knows most people are looking for.  Let’s face it, that’s why they dropped as much as they did for that 60 second ad.  The only question is whether or not religious leaders believe in people’s hopes and aspirations as much as Toyota does…