Requiem For A Tortoise And A Troubled World 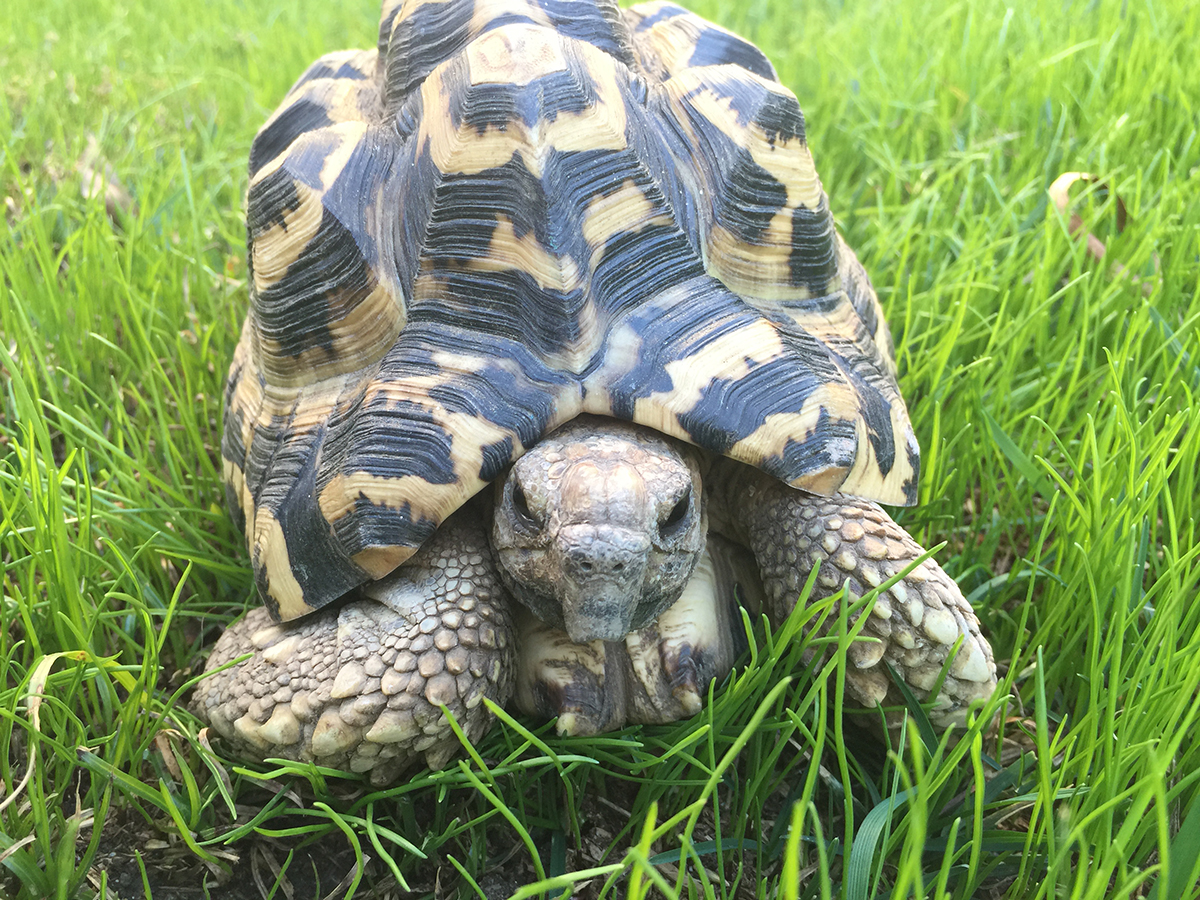 I’ll stop here though, because my point in citing that short and horrible history, was only to make a distinction between those events and what happened yesterday, and mostly, to point out how strange it seems that something as insignificant as what I’m going to tell you is having such a profound effect on me this morning. Yesterday, I discovered that my African Leopard Tortoise who would have been five years old at the end of the summer, was dragged away by one or more raccoons and presumably torn apart and eaten.

I’m no animal expert to say the least, but between the total disappearance of my tortoise from our enclosed backyard, along with dozens of raccoon paw prints on our courtyard walls, and having just read on Internet sites like reptile.com and Tortoise Forum which all say that yes, raccoons, with their humanoid paws and their high intelligence are quite capable of carrying off a good sized tortoise and eating it somewhere out of sight, I was led to believe that my tortoise is gone for good.

Nor am I one these people who believe that pets are the same as human beings. To me, and here I opine at the risk of denigrating people who do feel that way but… If you think a child has the same value as a chipmunk, you’re either lying, (for reasons I couldn’t possibly comprehend), or you’re simply insane, and you should for your own good, and for the good of those around you, seek professional counseling immediately. I have four children of my own and I don’t believe in any way, that my tortoise, or the sixteen year-old border collie I had euthanized half a year ago, have the same value as my kids.

But, in spite of what I just said, I’m very sad about my tortoise. I’m sad as I type these words, sad as I look out the window onto my lawn where I’d catch a glimpse of him in a beam of sunlight happily (or so I surmised) munching on freshly cut grass, and sad for the small hole his absence makes in my life.

There’s no question we anthropomorphize our pets, we give them names (my little guy’s name was Dash). We ascribe all sorts of human characteristics to them: “He’s a feisty little critter, he loves it when I rub his neck, he’s so intelligent and so curious about the world.” But how many of these ideas have any basis in fact, and perhaps more importantly, who cares if they’re true or not? That seven-pound tortoise of mine was itself, a thing of beauty, a thing that I carefully fed and cared for, since he was the size of a quarter. My tortoise was a creature that I gave something akin to love to, for over five years.

And here is the crux of why I’m at all emotional over this cold blooded reptile, an animal, which in all probability had next to zero interest in me: We love the things and ideas that we give our time and attention to. Or more simply, we love what we give our love to. That short truism explains this awful contradiction: Why is it that the hundreds of people killed just over the last few weeks, while affecting me in some ways –and here I hesitate to admit this, though it’s nonetheless absolutely true –has not affected me as immediately and as deeply as the death of a pet tortoise.

As I read back my last few sentences they strike me as words that are in many ways immoral and insane. After all, I need only think back to Hallel Yaffa Ariel, the Israeli girl who was stabbed mercilessly in her bed as she slept clutching her teddy bear, to see how distorted that thinking of mine is. Is it true that I have more distress over a pet tortoise than I do for an innocent human being? It doesn’t seem at all right, and yet, it’s how I feel.

I’m not drawing any lessons here, not making any staggering conclusions, or useful takeaways — I apologize for that. I am however, bringing to light a flaw in my own thinking, a yawning schism in my manner of empathizing with the world around me.

I’ll contend with all of this for a long time I’m sure. I’ll continue to wrestle with my feelings and my intellect, continue to wage the small war that arises between my emotions and my rational understanding of the world.

Somewhere perhaps, at some time, I’ll get things squared away in my mind, but not now, not today. Things are too confusing, too distorted, and rather than making clean and easy assessments, I’ll continue to plumb the depths of the ambiguity of my own thinking. While that’s seldom quick or economical, I feel it’s the most moral thing I can do.