Hollywood Head-scratcher: Why Does Some Violence Get a Pass? 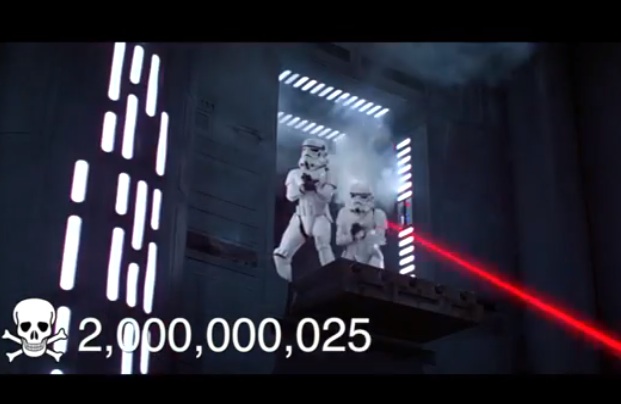 In just three minutes, the following viral video features every violent death that occurs in the original Star Wars trilogy – and it’s a huge number. Yet in all the debate about violent entertainment and the damage it does, or doesn’t do, I don’t think anyone ever beat up on George Lucas’ beloved Star Wars?franchise. That contradiction got me thinking.

What are we really talking about when we talk about violence in media? Clearly, as the video tally demonstrates, the Star Wars movies are very violent. But it’s not so objectionable, at least not to most people in the mainstream. Why is that?

In ‘Star Wars,’ nobody really bleeds. People die, but it feels like the violence doesn’t count.

Why do I, as a parent, find Star Wars far less disturbing than other films where far less killing is depicted (yet they’re movies I think of as very violent)? The answer, it seems to me, comes down to two words: blood and spaceships.

In Star Wars, nobody really bleeds and the characters travel in spaceships – in a galaxy far, far away. People die, but it’s all so unreal, that it feels like the violence doesn’t count in most people’s minds. Or to put a finer point on it: That can’t happen to us, or to those we love, so it doesn’t count.

When we object to depictions of violence, are we really just talking about violence that could realistically happen to us? And if we had a broader sense of who was included in “us,” are there forms of entertainment which might suddenly be more disturbing?

Others can, and will, debate the issue if excessive violence in mass media. And personally, even my broadest, most inclusive sense of “us” doesn’t include Wookies or storm troopers, so Star Wars doesn’t worry me.

Still, what we can think of as the “Star Wars Effect” remains something to keep in mind. It’s a way of thinking about who we consider to be part of “us,” and it may help us take notice of how much we care when violence happens to “them” (defined as others that don’t fit into your concept of “us”).

Here’s the video, which features extremely NSFW (not safe for work) music: