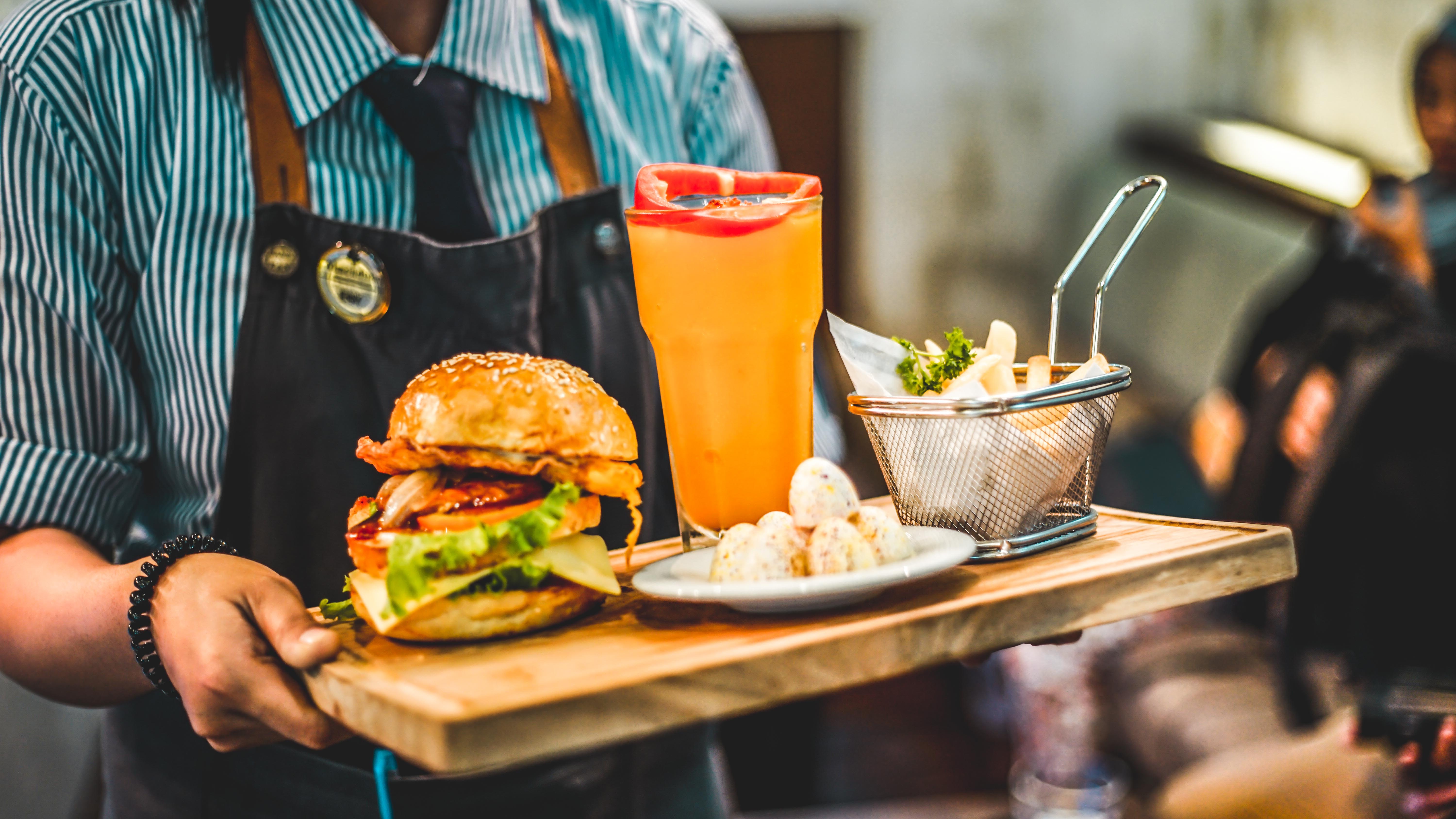 I spent years waitressing, and aside from learning how to open a bottle of wine properly, how to serve from the left and clear from the right, and the mixological difference between a cosmopolitan and a martini, I got a few spiritual lessons. These fall into the categories of “things I learned the hard way” and “the wisdom of experience.”

Restaurants are wonderful microscopes for looking at the finer (and the unsavory) dimensions of human behavior, and nobody in a restaurant is more primed to observe than the wait staff.

On a muggy Saturday night on the outdoor dining deck of the Private Yacht Club, quite late in the evening, I spilled a cup of clam chowder on a man in a navy-blue polo shirt (with an embroidered horsie) while trying to place it on the table before him. It was my first (and only, by the grace of G-d) time spilling food on a customer, and what added insult to the injury to my ego was that he said, “My wife told me I should get it myself because the waitress would spill it on me.”

When the man said that to me, I thought, “Yeah, I guess you could just tell that I’m the kind of waitress who would spill chowder on you.”

What I said out loud was, “I’m sorry. Let me get the manager. He will pay for your cleaning bill. I believe there are some spare polo shirts you could wear.” I remember the four-top laughing at my apology, and letting me know that, though they had come for dinner, they wouldn’t be staying.

Why was that cup of chowder different from all other cups of chowder I had served? I’d successfully served hundreds of cups of chowder! I remember how fast the slip happened, how inexplicable it seemed, how utterly surprising it was. The cup slipped off the saucer as I reached to place it on the table – but why? The angle of approach hadn’t seemed different. I wasn’t extra-tired or cranky that night. The diners weren’t sitting awkwardly… something, mystically, was off.

In Judaism, we believe that thought and action influence destiny. G-d spoke the world into existence, and as humans, to a lesser extent, the things we think and speak about can come to be by virtue of their expression. There may not have been any other reason for the spill than that they thought it would happen, and then it did. The mystics said, “Think good and it will be good.” Think bad and you might end up with soup on your t-shirt. The “Law of Attraction” really does exist.

If Not Now, When?

A group of six drunk dirt-bag guys came into the Western Steak House, sat down at the double table in the back, and ordered more drinks. I knew one of them, so I tried to be friendly and accommodating, even though they were wasted. They all ordered big meals – plates of large steaks and fries. It seemed off that they could afford big steak dinners, but you never know. (I certainly couldn’t afford one.) The day before was probably pay day.

One guy stood out – he ordered a veggie burger. “You’re vegetarian? I’m vegetarian too,” I said. He shook his head and slurred, “Naw, I’m not.”

“That’s cool that you eat veg food even though you’re not,” I said. I figured he was eating lightly for health, but I was wrong.

When I brought the food out to them, each man got his steak dinner and the veggie burger came out of the kitchen last. The steak guys tore into their meat with their jumbo steak knives and forks – a good meal was exactly what they needed to soak up the alcohol in their stomachs. But, when I set the veggie burger down in front of the guy who ordered it, he took one look at it and vomited on the table.

I freaked out. There was no way I was cleaning up this guy’s vomit – I’m petrified of throw up. I ran to the kitchen to get the dishwasher to bring out rags and some mop water, and by the time he got the cleaning supplies together and came out to the table, the good-looking urban vacationers at the adjacent table had gotten up and left the restaurant. Their orders were already cooking, and I had to go through the process of reconciling the deficit their unpaid order left on my nightly receipt.

It had seemed like an eternity between the time I ran for the dishwasher and the time he arrived with cleaning supplies. The couple at the adjacent table no doubt were nauseated by the vomit languishing on the next table over. Had I not waited to clean it up, I could have made that sale and gone home with like five more dollars in my pocket that night. I was also mortified that it was a problem that I could have solved, but I got paralyzed by fear and disgust. The dishwasher had only cleaned it up out of friendship – I also worked in the kitchen at the Western Steak House, and I was a fast, diligent worker in the kitchen, and I frequently shared my weed with the kitchen guys. I knew I was being a wuss, and so did they, and what they did was an unusually compassionate move.

Looking back, I wish I had grabbed a spray bottle of disinfectant and a couple towels and wiped it up as quickly as it happened. As the sages said, “If not now, when?” Fear is the harbinger of procrastination. Sometimes, you just have to step up and do the responsible thing as quickly as you can, regardless of how afraid of it you are. The longer you wait, the worse the situation gets.

Two very different tables stand out in my mind from when I waitressed at the Independent Suburban Tex-Mex Place, and here is the first: One quiet weekday afternoon, a man who looked like a genuine Woodie Guthrie-style hobo came in for lunch. He was polite, calm, and soft-spoken and ordered the cheapest thing on the menu – a bowl of chili and a glass of tap water. When I brought him his complimentary basket of homemade chips and salsa, he seemed genuinely surprised that he got something so nice gratis.

I watched him carefully scoop up salsa with each chip, and chew it with a blissed-out look on his face. He finished every little bit of his bowl of chili, and when I brought the bill, he said, “This is a nice place you’ve got here.” His meal was like $6, and he left me a $3 tip – 50%, which is almost unheard of.

The second story: One busy weekend night, a party of eight got one of the prime tables by the windows in the front. They ordered rounds and rounds of drinks before ordering food, which anyone who waits tables knows is a jackpot. They were well-dressed and affluent-looking. They kept me very busy going to and from the bar, bringing food at staggered intervals when one of them would feel like ordering something. Tables like that are simultaneously a pain in the rear, and exactly what you want, because their bills are huge.

Close to closing time, I brought them their bill and they called me back over to the table to argue about it. “He said he was paying, and now he won’t pay,” one man said as he pointed at his friend. “I’m not paying!” his friend said. An argument that escalated almost to the point of fisticuffs erupted between them. The man looked at me and said, “I’m not paying!”

“Someone needs to pay the bill,” I said as non-confrontationally as I could. “Maybe you could split the bill. Would you like me to bring you separate bills?”

“He said he’s paying and I’m not paying!” the guy bellowed. I went and got the manager. I watched from a distance as she argued with them. It took her 20 minutes to get half of the bill paid, and the other half the restaurant ate. They left almost brawling, with an order to never come back. I’m still not sure if it was an elaborate scam that they practiced at many restaurants, or if it was a genuine fight between friends.

The mystical tradition of Torah distinguishes between things that are eternal (treating people with respect, love for your fellow-man, living with purpose, accomplishing good things, raising a family, etc.) and things that are temporal (money, cars, prestige, etc.). The lonely chili guy was living in the world of eternal things – treating people well, enjoying the present moment, being decent. The flashy rich-looking group of “friends” was living in the world of temporal things – ego, greed, each man for himself. I’ll always remember both of them, and how much I loved waiting on the chili guy.

Be the chili guy. He was a mensch.