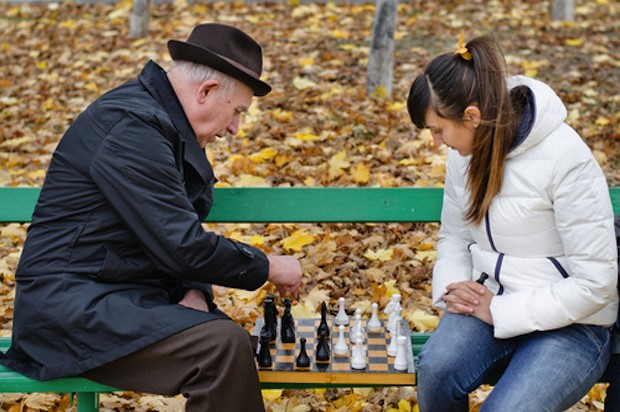 In life, the most common friendships we form are with our peers – people who see the world as we do, and who are in the same age bracket. This is understandable; we meet most people at school or at work. But is there a certain limitation to surrounding ourselves with only those people who are very similar to us? To quote Albert Einstein, “If you only talk to people like you, you’ll never learn anything new.”

When it comes to odd-couple friendships that run deep, I can’t help but think of the 1971 cult film Harold and Maude, in which a young kid’s life is changed by striking up a surprising friendship with a woman his grandmother’s age. But companions who transcend their age demographics aren’t just a fictional phenomenon.

I never would’ve predicted I’d have so much in common with someone from a different generation.

In my real life, another pair comes to mind: two friends named Nina and Elaine, who regularly meet at 7 a.m. to walk and share their thoughts, feelings and theories about life. Nina is a middle-aged writer and Elaine a psychologist in her 80s. Since they’ve forged a relationship based on equality and reciprocity, neither of them perceive the age difference when it comes to the depth of their friendship.?Both have relatives living far away, so they consider themselves surrogate family members – the best of friends. They each bring their own brand of respect and love to their 20-year relationship, which fosters a unique opportunity for both of them to learn things from each other they otherwise might not, if they were closer in age.

Take my ten-year friendship with Robert, a former neighbor with whom I became dear friends. Just like Nina and Elaine, our relationship was based on mutual admiration and we developed a deep bond, regardless of the fact that there was a 40-year age difference between us. From Robert, I’ve learned about politics, war, The Depression and how an older person sees the same patterns happening over and over in our society. We’ve also commiserated about what it was like being raised by mothers with similar child-rearing styles. I never would’ve predicted I’d have so much in common with someone from a different generation, but my friendship with Robert taught me: There are many benefits to knowing someone who has experienced a different chunk of life than I have. Listening to him and learning about his life has added so much to my own.

Robert, too, received the benefit of endless conversation about topics that his peers (of which there were few remaining) often didn’t like to think about: What’s the meaning in life? What happens after we die? What’s it like to know that goals you once had are now unattainable? I found that, as I became able to process some of these topics with another interested, curious person, it also helped Robert work through some difficult issues of his own.

I’ve often thought that one of life’s greatest blessings is to make a meaningful connection with another person. It nourishes the soul and reflects our own goodness back to us. When it comes to making intergenerational connections, well, the possibilities are truly endless. Set aside rules and traditions about having reverence or keeping distance from your elders – those are things that get in the way of establishing reciprocal friendships. Focus on common interests and simply seeing another person for who they are, regardless of his or her age, and you may discover you can reap such rewarding benefits.