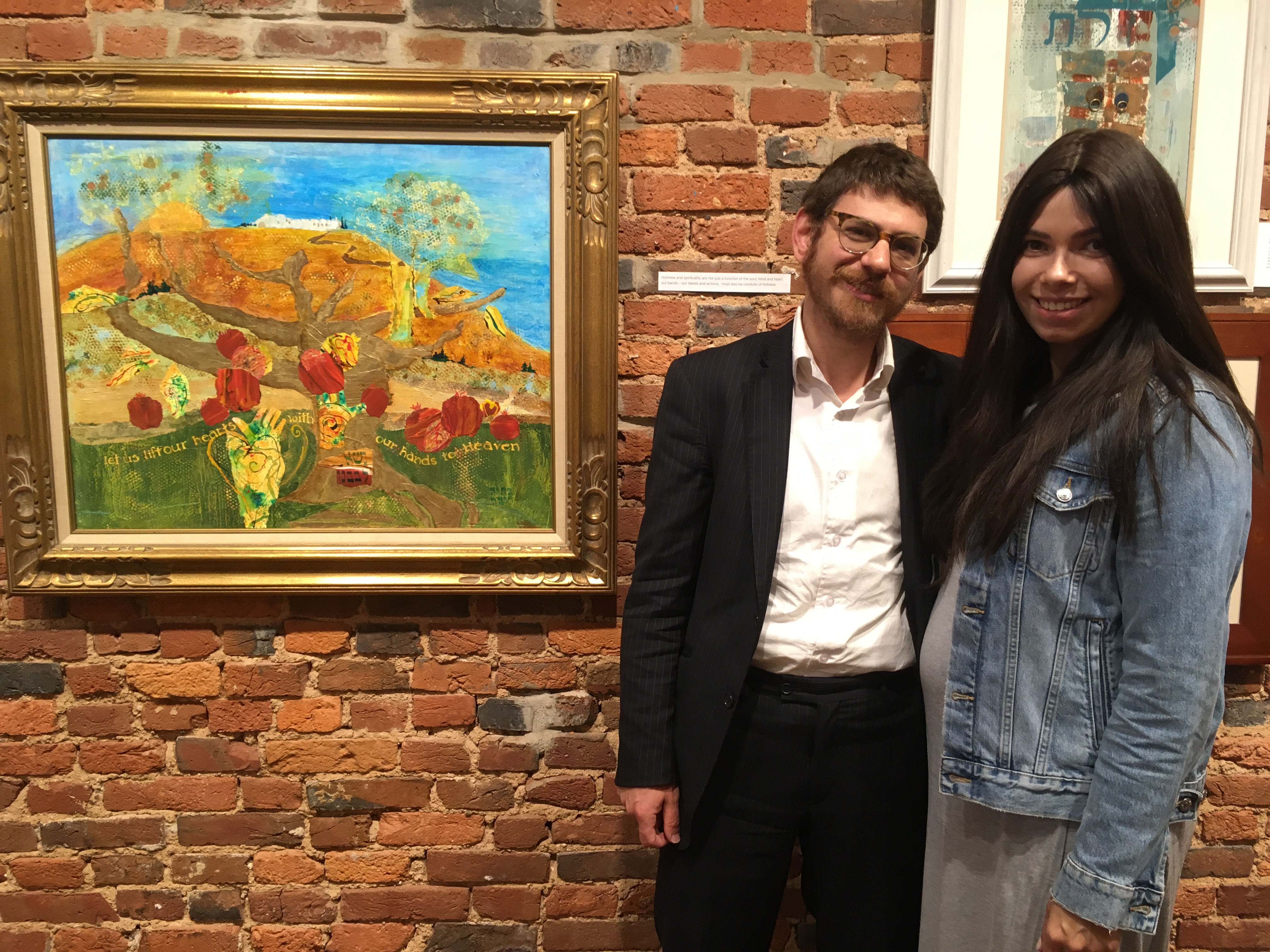 Since I was a little girl, people watching has been one of my favorite activities.  I’d wonder what the elderly woman with the crinkly eyes used to play as a little girl and what the curly haired teenage boy would be when he grew up.

My people watching has changed recently.  I still try to catch people’s eye, to share a smile, to wonder about their lives. But, now, instead of thinking about what they dream of or who their first love was, I find myself wondering who they voted for and how they feel about gay rights.

This division in the world, which has always been there, feels sharper now, more prominent.  Sometimes it seems as if the gap between us has become so wide that there are no bridges sturdy enough to cross over it.

When I walked into the Old City Jewish Art Center in Philadelphia, it was with this heavy feeling of skepticism.  Could an art center run by Orthodox Jews really be a place of unity? Is it possible that, people who often live a very separate life, would be able to find a way to unite the community? Does art really have the power to bring people together?

Rabbi Zalman Wircberg greeted me at the door with a welcoming smile.  He offered me coffee and cookies as I wandered about the room looking at the paintings that lined the walls. The first thing that I noticed was the diversity of images.  There were a few paintings that were overtly Jewish, but there were also vibrant urban scenes, beautiful still lifes of fruit, and lush floral landscapes. Beside each painting was an enlightening quote from one of the Jewish holy books.  I asked Rabbi Wircberg about it.

“There are so many different messages of Judaism that are universal and could enhance people’s lives, in terms of having success and happiness. For us, the question is how to take those ideas and extract them from the Hebrew into every day English and make them relevant and show how they’re connected to your soul. There are rituals of course, like putting on tefillin, but there are also ideas that anyone can relate to.  Our job is to promote those universal messages.

Art is a medium, a vehicle, a universal language that we can use to expose people to these ideas and not in a preaching way… not even in a shul. Many of our patrons are people would never go into a shul. You have every type of person walking into art galleries, especially here, in the Old City.  And then, in a natural way, they’re bumping into a rabbi or a quote straight out of the Talmud.  They might not get into that world any other way. The overall goal is to teach and spread these beautiful Jewish ideas to the masses through arts.”

Although this sounded like a beautiful idea, I wondered who he meant by “people.”  Was he referring to other observant Jews, to secular Jews that could be encouraged to be more observant?  Or did he truly mean everyone?

“Our goal is to be warm and welcoming and give everyone a chance to interact and sit together for Friday night dinners to understand each other a little better. A visit to the Old City Jewish Art Center on Friday is the epitome of unity.  You’ll find Indian people and African people, Jews, non-Jews, Observant people and non-observant people, atheists, people of any gender… anyone really… all sitting together to enjoy good art.”

But, if the Center is a place of unity, why call it Jewish?  What about it makes it Jewish?  Emunah, co-director of the art center, and Rabbi Wircberg’s wife answered.

“People will come in and say, ‘What does it mean that you are a Jewish gallery, you have Judaic art on the walls?’ and we say, ‘Actually, no. We are not just showing Jewish artists, we are showing an African American who is talking about his struggles growing up and art that deals with themes of human trafficking’ and people want to know, ‘Then, how are you Jewish?’ and we explain the concept of connecting it to Judaism.  When you show the world that Jewish concepts can be connected to universal themes, it makes it feel a little softer. It’s nurturing, not as threatening.”

“One thing that I’ve noticed since we started is that I’ll be walking in Philly, waiting to cross the street and someone will stop me and say, ‘Oh we know you, you run the Old City Jewish Art Center,’ and they’re not Jewish or connected to Judaism in any way, but they speak from such a warm place because they’ve had a warm experience with us.

There are all these ideas coming out now about how to fight antisemitism and this is a great demonstration of how it’s being done in a city and changing the whole dynamic of how non-Jews view Jews. Our goal is to be warm and welcoming and give everyone a chance to interact and sit together for Friday night dinners to understand each other a little better.”

I wondered what would make these two Observant Jews leave the predominantly Jewish neighborhood of Crown Heights to come here, to the Old City of Philadelphia, an area that is not known for its Jewish presence.

Emunah explained it to me.

“We met here, in 2007, a year after the Gallery was started.  In 2006, Rabbi Menachem Schmidt, a Chabad rabbi, and his family lived a few miles away. On Shabbat, they would be going to their house and he would notice this culture of something called First Friday which we have here in Philadelphia where all the galleries in the area, on the first Friday of every month, would stay open late.  It became a whole culture where people would come and go.

He’d be walking the streets on these Friday nights and he noticed that there was no Jewish presence.  He thought, why not make a Jewish art gallery for these people who are already here.  So, he found a space. One of his friends was a photographer.  They put some art on the walls, just to see what would happen.  They made some food, maybe some chicken soup, and people started coming in the door.  I think he stopped counting at 1,000.  It was a huge scene.  They had a reception from 5-9 and at 9 they would sit down and do a big Shabbat dinner and it was packed.  Lots of tables, people squished in.  It was open to the public, everyone off the streets, the students, the collectors, the tourists, Jews, non-Jews, everyone sitting together celebrating Shabbat.

We met here at one of those dinners in 2007 and then a few years later, we were in NY just living, doing our thing… and we thought to ourselves, ‘What can we do to make a difference in the world?’  So, we called up Menachem Schmidt and said, ‘We want to come take over your art gallery. ‘”

Since taking over the gallery, they have expanded the center to include monthly themed gallery showings, young professional events, artist workshops, culinary exhibitions, and a range of other programs. Each of these events is based around the concept that art has the power to unite and spiritually elevate everyone.

“In Chabad, we believe that there is holiness and Godliness in everything and everyone. From an article of clothing that you wear to food that you put in your mouth, to artwork on the walls, there’s always a way of elevating everything in the world. When you have a piece of food, you make a blessing over it and it becomes something spiritual, not just a physical thing.  The same with art. What we want to show is that you can bring out the spirituality and the Godliness of everything and everyone.” Emunah said.

The more I listened to Emunah and Rabbi Wircberg  talk, the more my skepticism fell away.   Religion, to me, always seemed like another way to divide people, to make them feel inadequate or guilty.  But, here was this Orthodox Jewish couple talking about using Judaism and art to unite people, regardless of race, religion, or sexual orientation.

My heart swelled as I heard them talk about how they envision the future of the Gallery.

“We want to build and have quality exhibits and quality artists, but at the same time we want to keep being a place for emerging artists, artists who are not yet established or who are getting back into it.  In terms of programing, we want to see more workshops, more artists coming to do demos and teach music and writing and poetry workshops. More universally, we would love to see this idea spread to  communities around the world so that other communities can enjoy the richness of Jewish spirituality and art.”

The idea of having such a warm, inclusive idea spread to other places around the world gave me hope. In the end, I left feeling inspired by the art, the spirituality, but, more than anything, by the warm accepting spirits of Zalman and Emunah.