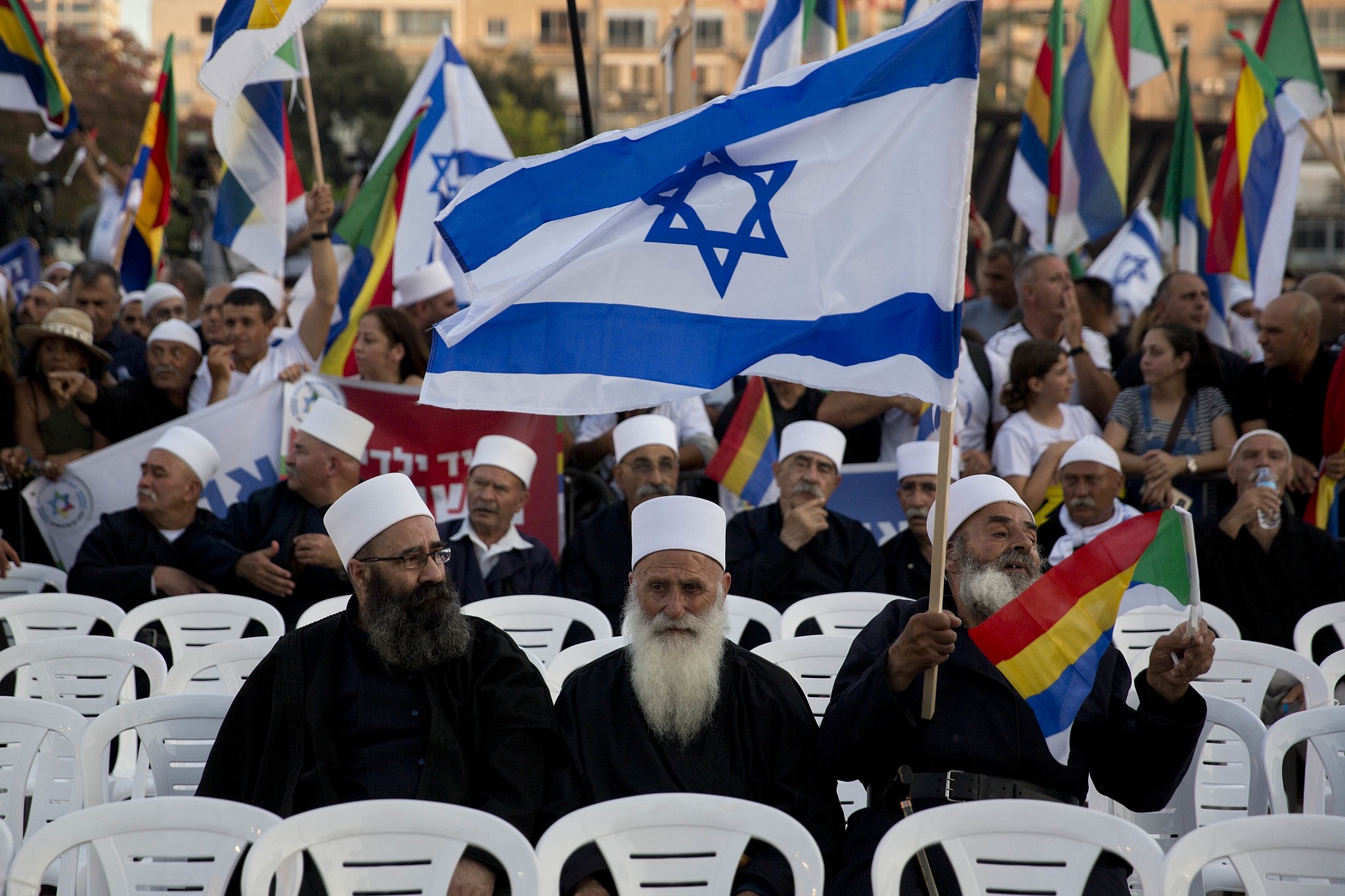 As recent protests in Jerusalem attest, no ethno-religious group has been as much disturbed by Israel’s new nationality law as the Druze. For sure, parliamentary ratification of a collective destiny for Israel’s Jewish citizens alone, and the concomitant elimination of Arabic as an official language, outrage those Israelis who identify with Islam and Christianity, rather than Judaism and Jewry.  Along with the Druze, these first-language speakers of Arabic make up a full twenty percent of the Israeli population. That is more than the percentage of African-Americans in the U.S. It is also more than the percentage of Hispanics and Latinos who are U.S. citizens.

Altogether, the percentage of all non-Jewish minorities in Israel is virtually the same as the combined percentage of Afro-Americans and American Hispanics: 25%.  (To be clear, I am referring only to Israeli citizens whose mother tongue is Arabic, not to Palestinians in Gaza or subject to Israeli authority in the West Bank or Gaza.)  It is as if the United States Congress passed a bill that reaffirmed human rights for all U.S. citizens and singled out the Caucasian majority for recognition, but not Blacks or Hispanics.

So why pay particular attention to the reaction of the Druze, an otherwise quiescent, tiny minority known – rightly or wrongly – for practicing a secret religion?

The usual reason given is that, unlike other Israelis of Arabic heritage, Druze men are subject to Israeli military conscription and serve their nation honorably.  To the death.  In fact, by percentage of their population, Druze men serve in the security forces – and absorb casualties – at a higher rate than any other ethno-religious category of Israelis.  That includes Jews.  No wonder that the Druze refer to the relationship with their fellow Jewish citizens as a “covenant of blood.”  No wonder that their exclusion from mention in the nationality law has caused such pain, bordering on a sense of betrayal.

Having lived for over half a year in an Israeli Druze village – the only non-Middle Easterner,  and the only Jew, among over six thousand Arabic-speaking neighbors – I can attest to many other reasons why the Druze are legitimately shocked by the new legislation and why we should take that shock to heart. But I also understand why so many outsiders fail to get it.

At first glance, and at first sound, the hilltop Druze village in the Upper Galilee doesn’t quite feel like Israel; Lebanon, indeed, is within eyeshot. The language you hear in the streets is Arabic. You start when you are introduced to a certain Osama. And then a Nasser. And maybe then a Khalid and a Sheikh (first two names of Jewish American journalist Daniel Pearl’s beheader.)  You stare at the men who are dressed in black shirts, black pantaloons, and pill-box hats, and they stare back.  You stare at the women, also dressed in black (except for white headscarves), enveloped within loose-fit skirts.  They may steal a glance back at you, the staring stranger, even though they are not supposed to look at men who aren’t relatives.

But then a man approaches you – perhaps because you look lost – and asks if he can help.  And he asks you in Hebrew because, after all, you don’t look like you are from these here parts… Need directions?  A lift in his car?  He is likely to invite you into his home for a cup of coffee.

You will be asked if you are Jewish and met with a big smile if you say yes.  You will be told how much the Druze and Jews have in common, starting with Moses and his father-in-law Jethro, a major Druze prophet.  You will hear of the love for “our state,” meaning Israel, “the best country in the world for the Druze.”  And you will be humbled if you visit the village cemetery for its fallen sons of the Israel Defense Forces.

Eventually, villagers you don’t even know will wish you a hag sameach – Happy Holiday! – on those minor Jewish holy days you might otherwise have lost track of on your calendar.  Even Druze schoolchildren reflect more knowledge about Jewish history and religion than the vast majority of their not-so-observant American Jewish counterparts.

Druze in Israel are not just a minority group resigned to living under Jewish sovereignty, under sufferance. They are proud of being Israeli, of mastering Hebrew, of participating in the national life of the Jewish state – a state, that until the recent nationality law, they would willingly characterize, even if flawed, as “democratic.”

Yes, the Druze may be a small minority in Israel – but percentage-wise, they are the equivalent of one particular American minority who would feel fiercely aggrieved were a similar law passed in the United States: Jews.  And, in a recent scientific twist, it has been discovered that Ashkenazi Jews share with Druze more genetic material than with other Middle Eastern peoples.

Ignoring the Israeli Druze is bad enough; alienating them outright smacks of disloyalty.  The Druze of Israel should rather be cherished not only for their past loyalty to the Jewish state, but for their future potential, as members of a wider Arabic-speaking world, to serve as communicants for peace.  Given the dead-on-arrival reaction by Palestinians to the Trump-Kushner peace proposal, intercessors like the Druze are sorely needed.